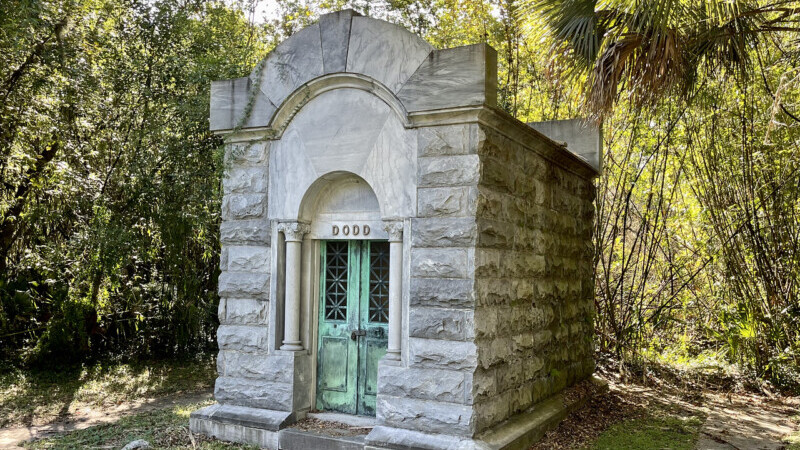 Jacksonville’s historic spaces offer no shortage of secrets and local folklore, and Evergreen Cemetery, the city’s oldest active cemetery, is no exception. Here’s a look at the ghost stories attached to this venerable burial ground.

Founded in 1880, Evergreen Cemetery is Jacksonville’s oldest cemetery still in operation. The 167-acre site is the final resting place of 14 Jacksonville mayors, five governors of Florida, four U.S. senators, and even the city’s founder, Isaiah D. Hart. It also contains the graves of tens of thousands of everyday Jaxsons from virtually every neighborhood, background and walk of life. Represented there are veterans from many wars, survivors of the Titanic, paupers and plain folks. A walk through Evergreen Cemetery is a walk through 15 decades of Jacksonville history.

Unsurprisingly, the historic cemetery has accumulated its fair share of ghost stories. Evergreen turns up frequently in articles and lists of “Jacksonville’s most haunted places” that publications like to run during the October spooky season. Examples include the Jacksonville Daily Record in 2001, EU Jacksonville and News4Jax in 2018 and Jacksonville Magazine in 2019. Even The Jaxson has been unable to resist the lure of this seasonally popular genre.

Accounts of Evergreen’s ghosts are generally brief but remarkably consistent. For two decades, most such pieces have included the same three ghosts and the same handful of explanatory details. My colleague Ennis Davis’s version from The Jaxson is typical:

“Evergreen is said to be haunted by several spirits, including the ‘Lady in Violet,’ a man in old-fashioned attire near an unmarked mausoleum, and the ghost of a woman near the ‘Ugly Angel’ tombstone.”

This brief snapshot and others like it raise further questions. Why violet? Why is the mausoleum unmarked? Just how ugly is this Ugly Angel, exactly? And where did all this come from?

Origin of a local legend

Seemingly, the stories of Evergreen Cemetery’s three ghosts are so consistent because they all derive from the same source. In 1999, a Jacksonville ghost researcher named Lee Holloway published an article in a paranormal newsletter that appears to be the earliest account of Evergreen’s resident specters. Her piece, “Encounters at Evergreen Cemetery,” was the cover story of the October 1999 issue of the Ghost Trackers Newsletter, “the official paranormal publication of the Ghost Research Society.” Founded in 1978 by Martin V. Riccardo and still active to this day, this group published Ghost Trackers from 1982 to 2001.

Holloway seems to have been heavily involved in the paranormal scene in the 1990s and early 2000s. She was a regular columnist for Ghost Trackers, contributing several stories about ghosts in Florida and New England, including “The Spectral Ladies of Flagler College” and “Fort George Island’s Haunted ‘Castle’.” She was quoted in a number of books on haunted places, and seems to have played a significant role in spreading some of the First Coast’s best known ghost stories.

According to her Ghost Trackers byline, Holloway lived in the Carriage House Apartments in Arlington, now known as the Chelsea Courtyards. This complex, particularly Apartment 40, has a reputation as one of the most haunted places in Jacksonville, appearing frequently in articles and books on Florida ghosts alongside historic sites like Kingsley Plantation and Annie Lytle Elementary, the “Devil’s School.” This is surprising considering that unlike Kingsley or Annie Lytle, the apartments are not historic, or even especially interesting or spooky-looking. It seems very likely that Holloway helped popularize their ghostly reputation.

Holloway’s articles are distinguished by their attention to detail and witness interviews. Her piece on Evergreen Cemetery features quotes from three individuals who say they saw spirits on the grounds, and includes descriptions and photographs of the landmarks where the encounters were reported. These are the same three spirits mentioned in almost all of the numerous articles on Evergreen’s ghosts published since then: the “Lady in Violet,” the “man in old-fashioned attire” by the nameless mausoleum, and the ghost at the “Ugly Angel” headstone.

First up in Holloway’s article is a ghost associated with an elaborate stone headstone in the western part of the cemetery. “Among the granite and marble headstones, statuary and vaults, there stands an incredibly unattractive male winged creature,” wrote Holloway, noting that it came to be known as the “Ugly Angel.” The ornate headstone — which isn’t all that ugly, as it happens — marks the grave of Belle Hightower, who died Dec. 12th, 1932, at the age of 34 (Holloway misidentifies her as “Bette”). Other members of the family are buried nearby.

Holloway attributed her ghost story to a Jacksonville woman named Barbara Wimberley. Wimberley told Holloway that as children, she and her siblings would run off to visit the “Ugly Angel” on their family’s frequent trips to the cemetery. One day in the early 1960s their grandmother, who had just lost her brother, accompanied the kids to Hightower’s grave, where they saw the apparition of a woman “clothed in a light-colored dress suit.” Far from frightening the family, the apparition brought Wimberley’s grandmother a sense of peace.

Wimberley reported seeing the ghost again in the 1990s, shortly after the death of her own brother, and felt the same sense of peace. “I think whatever it was appears to people who are grieving to comfort them and let them know there is life after death.” Holloway didn’t specify that the ghost is Belle Hightower, or note any other sightings.

The Lady in Violet

Holloway situated her next ghost, the Lady in Violet, in the older, oak-lined eastern part of the cemetery. “It is in this setting of shadows and gloom that a lady dressed in violet once walked and perhaps, she walks here still,” she wrote. The informant for this ghost is Mary Frances Hilliard, who reported seeing it with her aunt, uncle and cousins in the 1940s. While wandering around near the gate, they spotted a “woman in an old-fashioned violet-colored dress” and a “black hat with some kind of plume on it like an ostrich feather.” Based on her outfit, Hilliard guessed she had lived in the 1890s. As violet was a color of mourning in the Victorian period, Holloway speculated that “the lady is likely the apparition of a woman who, in life, frequently visited the grave of a loved one.”

Hilliard said she was fascinated with the apparition, but her aunt nearly fainted with fright and had to be taken back to the car. Back home, the aunt dramatically reported what they had seen, and Hilliard’s grandfather dryly responded that “people had been seeing the spirit of a woman in the cemetery as far back as he could remember,” and that “anybody who saw the ghost would have a death in the family in a few days.” Holloway questioned whether he was sincere or simply trying to get a rise out of his hysterical daughter-in-law, but said the aunt’s father died a few days later. She writes that there had been no further reports since Hilliard’s.

The third story is the most interesting, but also the biggest stretch in that Holloway’s informant never claimed to have actually seen the ghost herself. Vicki Wallace told Holloway that during her senior year in 1969, she was in a creative writing class with an odd classmate, Betty. Betty contributed an especially vivid story about meeting a “ghost lover” at Evergreen Cemetery near “a splendid tomb of unknown origin.”

As Wallace remembered it, Betty’s story involved her encounter with a “blond, blue-eyed apparition, attired in the duds of another century” within the “cobweb-shrouded doorway of an old mausoleum.” The ghost introduced himself as Thaddeus, and he and Betty became an item. When Wallace teased Betty about making up such a strange story, Betty responded, “Who said I made it up?” Betty’s depiction of the mausoleum was so detailed that it was clearly an actual tomb; in fact Betty and her friends were able to locate it. The image of this tomb graces the cover of Ghost Trackers Newsletter and is featured in the article.

In 1995, Wallace revisited Evergreen with her stepdaughter, who was “really into the gothic scene and liked taking pictures of old graveyards and things like that.” Wallace reports that her stepdaughter saw a man in old-fashioned clothes in the door of an old mausoleum. When they approached it, Wallace was “shocked to find they were standing before the unmarked tomb her weird classmate had written about more than a quarter century before.”

The tomb Betty referred to, or at least the one in Holloway’s pictures, was indeed unmarked at the time. It remained so as recently as 2015, when writer Tim Gilmore visited it for Jax Psycho Geo. Today, however, the tomb has been restored and it’s no longer unmarked; the name “Dodd” is emblazoned above the entrance. Moreover, the names of the family members are inscribed on their niches and are clearly visible through the grated door. While it would make for a good story, Thaddeus isn’t among the names.

The exercise of tracking down the first written report of Evergreen Cemetery’s ghosts reveals a lot about how legends and folklore spread in a community. Details and incongruities have been shaved down over time, but even decades after the original sources have been forgotten, the kernel of the stories continues to spread online and in yearly news pieces on Jacksonville ghostlore. Whether or not the Ugly Angel ghost, the lady in violet or Thaddeus the ghost lover ever existed, they’ve achieved a kind of immortality in the collective memory of the city. 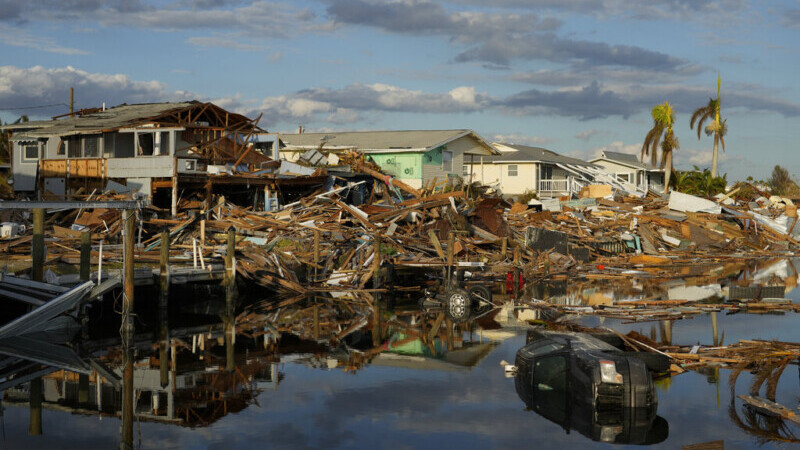 Perspectives Opinion: Can the insurance crisis be fixed?

As I said in my last column, Northeast Florida was very blessed in that it largely ducked the wrath of Hurricane Ian. I was very fortunate to have escaped any damage because, unbeknownst to me, I did not have homeowners insurance as the storm was taking its tour of destruction across the state. Florida’s insurance crisis has been widely reported: ...
END_OF_DOCUMENT_TOKEN_TO_BE_REPLACED
Read More