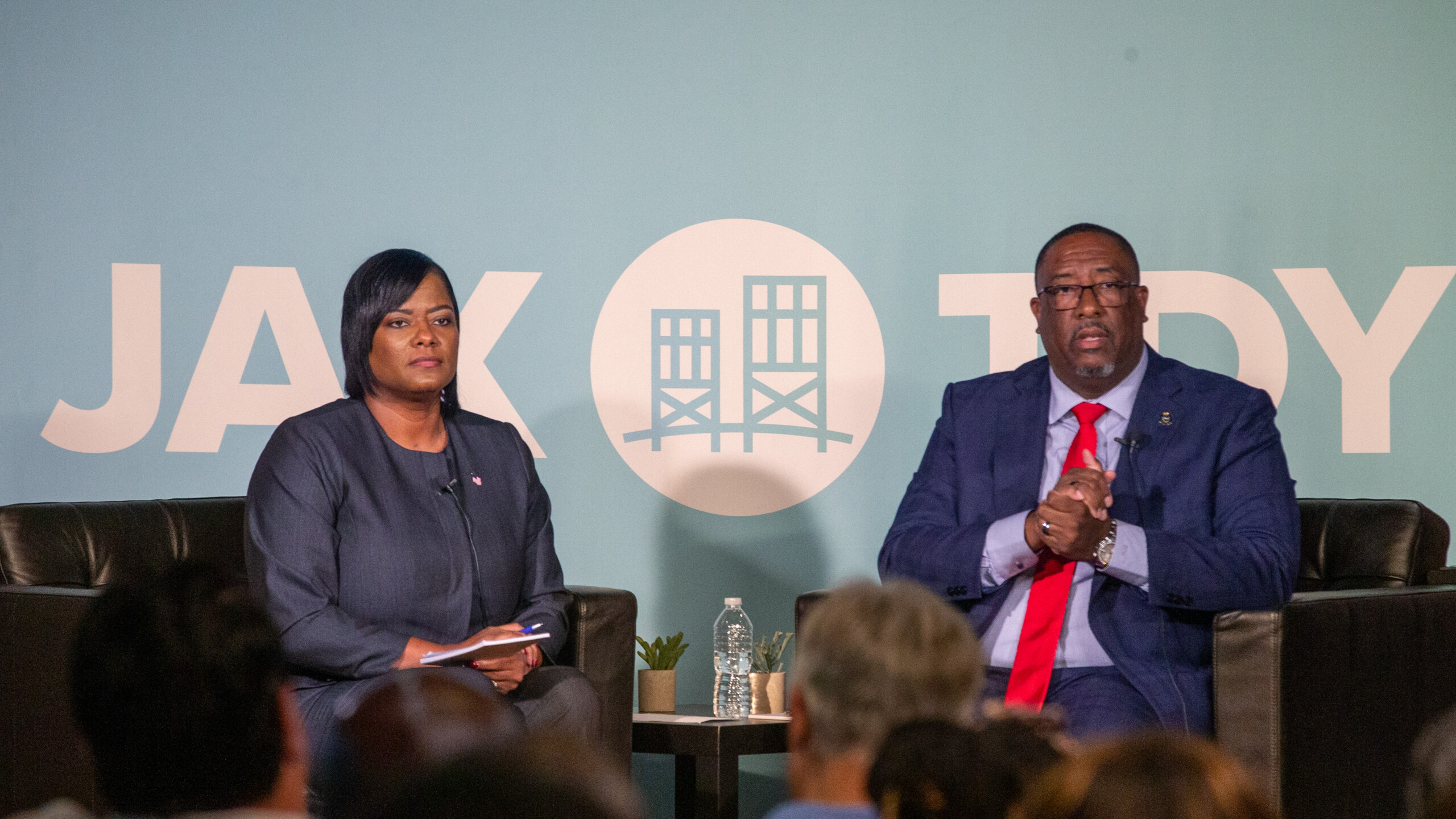 Jacksonville sheriff candidates Lakesha Burton (D) and T.K. Waters (R) answered questions about crime, police misconduct, money and more during Thursday’s candidate debate hosted by Jacksonville Today and the Jacksonville Bar Association. It was their first public debate since the August 23 election, when Waters got 47% of the vote to Burton’s 33%. Because no candidate got more than half the vote in the five-candidate race last month, the top two vote-getters — Burton and Waters — will face off November 8.

Throughout the debate, 24-year JSO veteran Burton pitched herself as the candidate of change and hammered Waters, a seven-year chief of investigations at JSO, for failing to reduce violent crime citywide. Waters touted his endorsements by former Jacksonville Sheriff Mike Williams and other surrounding county sheriffs, saying his 30 years with JSO would serve him in the agency’s top role.

Here’s some of what they say they would do as the city’s top cop (answers in alphabetical order):

Q: Will you require your appointed staff to live in Duval County?

Lakesha Burton:  “The most important thing is to focus on recruitment and retainment right now. So, I think that’s what our focus needs to be about. It’s a very difficult job right now so what we’re having a hard time doing across the country is recruiting, getting police officers to want to be in this role. So I think that as a sheriff, we have to prioritize what that looks like and come up with different incentives, perhaps, to look at getting officers to stay in our city. So, I just think that that’s not the high priority for me, especially when you look at the violent crime that we all are faced with every single day.”

T.K. Waters: “I would not require my appointed staff or any staff member to live in Duval County. I think there’s a big downside to doing that, and the reason I say that is because our police officers come from a lot of different areas: a lot of metropolitan areas, a lot of smaller areas around our city. I think we lose our ability to recruit, and we lose out on some very talented candidates if we start doing that. … What I want to do is take the very best talent from around us and make sure they can come here and work, and if they have to travel home in a neighboring county then then we’ll have to deal with that.”

Q: Do you support expanding the mental health co-responder program?

Lakesha Burton: “Actually, the co-responder program that the sheriff’s office currently has, I was instrumental in making sure that happened. So I think at the end of the day, we have to make sure that we’re doing that training and we are partnering with our local stakeholders to help us better do our job. … Our police officers are trained, but we are not the experts. So I think it behooves us to continue to look at how we can expand that program.”

T.K. Waters: “Mental health is a serious issue in our community and jail should not house more mental health patients than anyone else. I think we have to focus really heavily on partnerships. You know, police officers have lanes, and there are certain things that we are equipped to do. There are certain things that we are not equipped to do and I am a big supporter of making sure that we have things in place, and in partnerships in place to make sure that we can effectively and efficiently serve the members of our mental health community.”

Q: Do you support a civilian review board to review complaints against officers?

Lakesha Burton: “I am not in favor of citizen review boards. I believe that it is very difficult for the layperson to understand without the knowledge of the law and having never experienced those quick-second decisions that police officers have to make, to be able to decide what their discipline should be. However, I do believe that the members of our community should have a voice, they should be able to ask those questions and be informed about what’s going on.”

T.K. Waters: “I do not support civilian review boards. … Those kinds of investigations [into complaints against officers] are fact-driven, fact-based investigations, and they are driven by the facts that we use. Now the civilian or the public has the right to go in and pick up any information that they want, and form however they want to do it, and see that and come to a conclusion – and even report that out to people because it’s public information.”

Lakesha Burton: “I do support bringing FDLE in to oversee our officer-involved shootings, not because I don’t think our process is good, it’s because I have the pulse of the community. Right now, in Jacksonville, we have two cities in one, and we have half of our community that has a big distrust for the police and they feel like we are investigating each other. So why not have the Florida Department of Law Enforcement come in? … I think that this will be the first step to rebuilding that trust in our community, and I think that we need to do that, so I support that.”

T.K. Waters: “I do not support outsourcing our officer-involved shootings, and here’s the reason why. Our officer-involved shootings, which I’ve worked now for several, several years in my career, are investigated by not just one or two entities, but it’s a four prong process. … After that process is completely complete, our state attorney – who I have the utmost respect for and confidence in – she holds, basically a counsel of her top level attorneys, they sit down at a table and they go over every piece of evidence in that case, after they go over that evidence in that case, they make a decision.”

Q: What is the No. 1 crime-related issue and what is your plan to address it?

Lakesha Burton:  “Violent crime is the number one concern to citizens all over our city.…It’s worse and it’s unacceptable. My opponent has been in charge of the violent crime unit for the last seven years. He’s had the money, the resources and the technology, he has failed us, he doesn’t get a pass. What we have to do is get back to addressing our violent crime problem from a more holistic approach. Their approach has been ineffective. … We need to get these criminals off the streets that have outstanding warrants, but also what I want to do is focus on victims of domestic violence. I want to work with victim advocates, I want to work with our judicial system so we can prevent a lot of the violent crime problems, murders from happening.”

Q: Will you be beholden to your political party if you win?

Lakesha Burton: “Everything is political. … The fact that we have officers who can’t openly support the candidate who’s not the sheriff’s pick, is a problem. The fear of retribution, retaliation and being ostracized because you are not aligning with [which] candidate is the pick. So it certainly is political. Is it right? No. So, that’s why on this campaign trail, I’ve been talking about changing the culture of the police department from the inside out. We need a sheriff who’s not going to lead from the lens of a political lens, or a personal lens, but from the lens of the law and what’s right for the people.”

T.K. Waters (R):  “My [political] thought processes are what they are. But I’ll tell you this much when it comes to the citizens of this community, it’s not Republican or Democratic, it’s people. And I’m here because I care about people, I care about what happens to people. That’s why I started this job. I care about that part of it. … I’m not Mike Williams, I’m a completely different guy. I’m not Ron DeSantis. I’m not any other sheriff. I’m T.K. Waters, and I’m here to serve this community because I love it. Period.”

Q: Would you support a pre-arrest civil citation diversion program for adults in Jacksonville?

Lakesha Burton: “The public defender and the state attorney have already stated that they would be in favor of an adult civil citation. I’ll work closely with our judicial partners to explore looking at creating that program for first-time offenders, for nonviolent offenses, victimless crimes, like driving with a suspended license. … But at the end of the day, if we do create this program, it will come with some serious consequences for those who don’t comply with the conditions of the citation. My opponent may think that that’s soft on crime. I disagree, I think it’s being smart on crime.”

T.K. Waters:  “I believe wholeheartedly in our juvenile citation program. I believe when you’re a kid, you do childish things. When you’re an adult, you do adult things, you pay adult prices. … I think that is the way you hold adults accountable for doing adult things, things that adults should not and should know better than doing. Juveniles, I understand. Adults, I don’t.”

Q: How would you oversee JSO’s half-billion dollar budget?

Lakesha Burton: “Wth a budget of over $500 million, our city should be safer, and we’re not. What I can guarantee you from me is that I will be accountable to the taxpayers for every single dollar, while ensuring that our agency has what it needs to keep our city safe and our officers safe as well. So, on day one, I’ll meet with our budget chiefs and I’m going to look at that budget line by line to look at the expenditures, to see where the gaps are and see where the waste is, because I want to make sure that we are spending your money appropriately. But also, I will not ask for one more dollar from the taxpayers without your buy-in. And that doesn’t mean you’re going to tell me what to do, what that means is you will know the what, the when, the where and how we are spending your money.”

T.K. Waters:  “I know that a large portion of our budget is salary and benefits. We have to keep paying our employees, it’s very important. When I say large, I’m talking to over 80%… We have to continue to pay those employees to keep the best and the brightest in Jacksonville. But there’s something else that we have to do. And that’s start at the very top and look for waste, and where there’s waste, you get rid of the waste and make sure you take care of that. And I want to directly message our public, I want to talk to our public directly. We’ll still have news partners, we still have that, but I want to talk to our public directly … so you understand the good, the bad, the ugly in the Jacksonville Sheriff’s Office.” 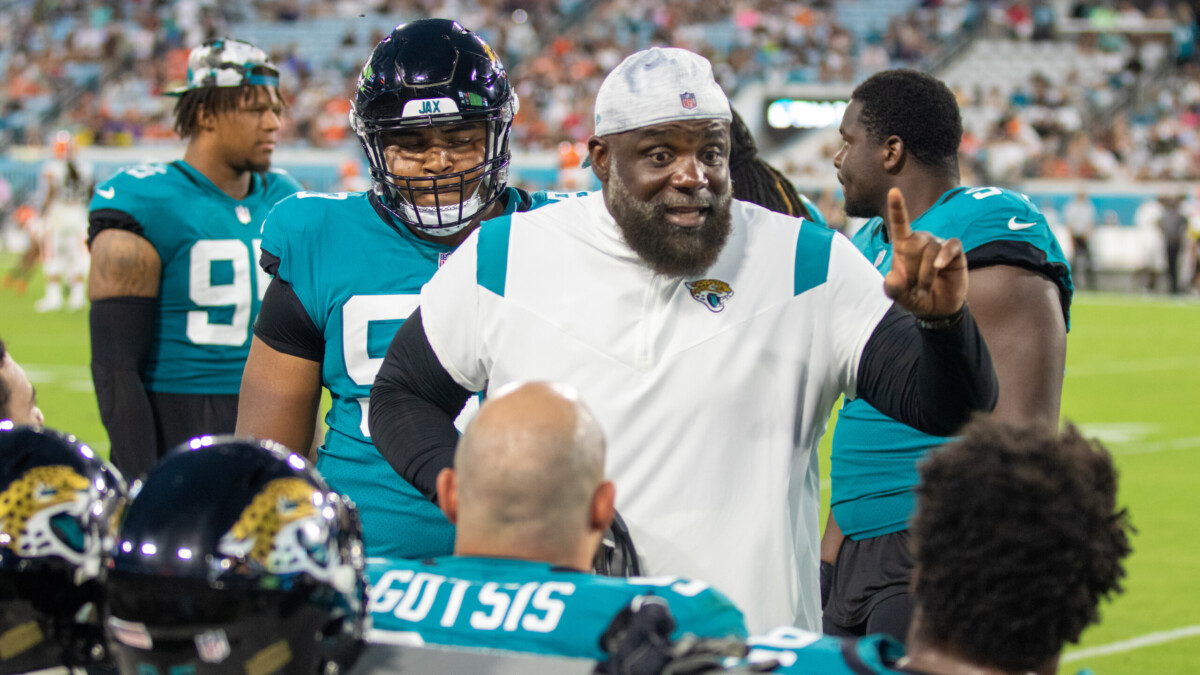 The NFL realizes it has a coaching diversity problem and the Jaguars are actively addressing it. When the Jaguars kick off against the Washington Commanders on Sunday afternoon, the team will have 10 on-field assistant coaches who are minorities. It will also have a Black coordinator for the first time in a decade. The team’s commitment to making pathways for ...
END_OF_DOCUMENT_TOKEN_TO_BE_REPLACED
Read More