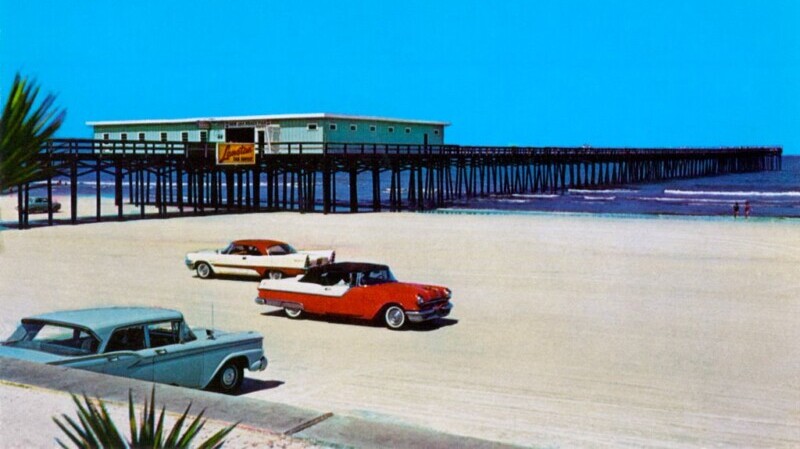 The Sixth Avenue South pier after its opening in 1963.

Jacksonville and the rest of the First Coast are home to some of the best, most accessible beaches in a state known for them – and we’ve still got weeks to enjoy them in all their summer glory. From unique geological features to lesser-known history to the birth of Florida’s favorite bike, here are six stories from our local beaches.

Blackrock Beach is home to a rare geological phenomenon

Blackrock Beach, also known as Boneyard Beach, is one of Jacksonville’s great natural gems. Located on Big Talbot Island in the Timucuan Ecological and Historic Preserve, it’s noted for its sublime ambiance thanks to the unusual rocky formations and driftwood skeletons on its shore.

The “black rock,” which gives the beach the appearance of a volcanic coast or an alien planet, can be found all over the side of Big Talbot facing the Nassau Sound. It isn’t really rock at all but a type of soil known as spodosol. This particular spodosol is one of the world’s rarest soils, a type called cornelia with a rocklike hardpan layer. It occurs on only one other barrier island in the region, the part of Fort George Island called Mount Cornelia.

The formations on Big Talbot have been exposed by years of erosion and accretion, which is also responsible for the tree skeletons, the source of the Boneyard Beach moniker. As the bluff erodes, trees collapse to the beach, where they’re stripped and bleached by the salt and sun. These surreal features have made Blackrock Beach a popular spot for photographers, and it serves as a trailhead for the Timucuan Trail, a walking and bike path on the East Coast Greenway.

On June 17, 1942, the unspoiled beachfront 4 miles south of the Ponte Vedra Inn in St. Johns County was the scene of Operation Pastorius, an invasion by spies from Nazi Germany. The spies, four German-born men who’d spent time in the U.S., were dropped off by a U-boat with a cache of explosives. Their mission was to sabotage key infrastructure in hopes of destabilizing the country and keeping it out of World War II.

The Ponte Vedra invaders followed a previous group that had come to shore in Long Island, New York, on May 26th. They were able to quietly bury the explosives and make their way to Jacksonville on a train. What they didn’t know is that one of their confederates, George John Dasch, the leader of the New York team, was about to turn on them. Apparently feeling the plan was destined to fail, Dasch contacted the FBI and revealed the whole plot. FBI agents went to Ponte Vedra, where they located the buried explosives, and within two weeks had captured all eight spies. Six of the spies were executed, while Dasch and Ernest Burger received lengthy prison sentences.

The failure of Operation Pastorius shook German intelligence, and it never again attempted to infiltrate the U.S. that we know of. Today, a historical marker in Ponte Vedra tells the story of this unusual episode from World War II, one of the Jacksonville area’s many connections to the conflict.

The rise of the First Coast as a leisure destination in the late 19th Century coincided with the adoption of Jim Crow laws, and most local beaches were decreed whites-only. With African Americans largely excluded for decades, a few enterprising business people established resorts where African Americans could enjoy the seaside.
The first African American beach in Florida was Manhattan Beach, north of Atlantic Beach. Industrialist Henry Flagler established this resort around 1900 for Black workers at his railroad and resorts. At its height, it boasted food, entertainment and lodging at two pavilions run by Mack Wilson and William Middleton. It remained a popular destination until the 1930s and ultimately closed during World War II. Today, the land is part of Kathryn Abbey Hanna Park.

By that time, African Americans had an even larger beach community to visit. The first Black-owned beach resort in Florida, American Beach, was established on Amelia Island in 1935 by a group of Jacksonville businesspeople, including Abraham Lincoln Lewis, founder of the Afro-American Life Insurance Co. and Florida’s first Black millionaire. In its heyday from the 1930s into the 1960s, it offered affordable vacation homes and a cluster of Black-owned restaurants, nightclubs, hotels and shops.

When the Civil Rights Act of 1964 opened Florida’s beaches to African Americans, American Beach declined in prominence and many of its buildings fell into disrepair. In 1977, Abraham Lincoln Lewis’s granddaughter MaVynee Betsch, known as the Beach Lady, moved to the community permanently and dedicated the rest of her life to preserving its legacy and remaining sites, including NaNa Dune, the tallest sand dune in Florida. Thanks largely to her efforts, American Beach was declared a historic district. It remains a favorite beach destination today, with the American Beach Museum, which opened in 2014.

A third African American beach served the Black community of St. Augustine. Frank B. Butler, a businessman in the African-American neighborhood of Lincolnville, started purchasing land on Anastasia Island in 1927 for a new resort, Butler Beach. Progress was hampered by a lack of access, but the area boomed when a new road was constructed in the 1940s. In the 1960s, with the end of segregation, Butler sold much of the property to the state for use as a public park. Today its legacy lives on as Frank B. Butler County Park.

The various incarnations of the Jacksonville Beach Pier have been major attractions for a century. What’s less known is the formative role it played in the rise of surfing in the First Coast. While a few locals had been surfing since the 1930s, as late as 1962 there were no more than a handful of regular surfers in the entire Jacksonville area.

At the same time, the Jacksonville Beach City Council was debating what to do with its aging 1922-built pier, located at Second Avenue North. While some Council members pushed to rebuild the pier, others felt it and the declining boardwalk attractions around it were attracting a “bad element” and wanted it gone. While the Council debated the matter, the old pier mysteriously burned down.

It’s likely Jacksonville Beach would have gone pierless if not for businessman R. L. Williams, who built a new pier with his own funds at Sixth Avenue South in 1963. This pier revolutionized surfing in Jacksonville. It created breaks that could be surfed even at high tide when the natural breaks were flat. It also provided a place for surfers to gather and show off, galvanizing the small community.

In 1964, the pier hosted an event that changed surfing in the First Coast forever. On July 9th, filmmaker Bruce Brown came to town on a roadshow for his groundbreaking surfing film, The Endless Summer. Brown started the events with a demonstration by surfing stars down at the pier, drawing a crowd of thousands, and followed it with a showing of the movie. Jacksonville caught a surfing fever that hasn’t broken since.

The Sixth Avenue pier was devastated by Hurricane Floyd in 1999, and the city of Jacksonville stepped in to build a new, sturdier pier closer to its historic location at Fifth Avenue North. This incarnation has been an even bigger surfing hotspot than its predecessor. Following hurricane damage in 2016, the newest pier underwent a renovation and finally reopened in July 2022, restoring one of the region’s top beach spots.

Jacksonville is the birthplace of the beach cruiser

One thing Jacksonville doesn’t give itself enough credit for: It’s the birthplace of the beach cruiser bicycle. The preferred bike of beachcombers everywhere came about in a small factory on Westcott Street in Jacksonville’s Eastside. Built as a potato chip factory in 1925, the factory later made snack cakes until Clayton-Willard Bicycles, now Emory Bicycles, purchased the structure in 1956. Brothers Clayton and Willard Smith had founded the company in Miami in 1944 and relocated it to Jacksonville.

In 1976, Clayton-Willard Bicycles introduced its Emory Mojave bike. An adaptation of the classic cruiser bikes popular in the early 20th Century, these “beach cruisers” had wider seats, single-speed gears and a broader frame to support balloon tires. Ideal for pedaling on the sand, the beach cruiser took off in oceanfront communities and was soon copied by many other manufacturers. Now renamed Emory Bicycles after their most famous creation, the company continues to produce American-made bikes at its Eastside Jacksonville factory.

Strange but true: The island that’s home to the Jacksonville Beaches communities has no official name. This is because it wasn’t always an island. While it has features like a barrier island, it was originally a peninsula connected to the mainland by a 10-mile land bridge in Palm Valley, between the San Pablo and Tolomato Rivers.

Things changed in 1912, when the Florida East Coast Canal Co. dug a canal known as the Palm Valley Cut to connect the two rivers. This was the birth of the Intracoastal Waterway in Northeast Florida, and made the former peninsular into an island.

Despite the lack of an official designation, the name Pablo or San Pablo has been commonly associated with the area. It originates from a 17th Century Timucua village known in the Spanish mission system as San Pablo. It stood on the west bank of the river that now bears the name. In the early 19th Century, much of the future island was part of a sprawling plantation, named the San Pablo Plantation after the river. The Pablo Road ran through this area, connecting it to St. Augustine.

The name has continued being used across the Beaches. Jacksonville Beach was known as Pablo Beach from 1886 to 1925, when the name was changed to reflect its proximity to Jacksonville. A number of streets, businesses and buildings on the island still use the placename, and informal references to San Pablo Island and Pablo Island have been in use. Noting this history, in 2011, a group of Beaches advocates proposed finally christening the landmass San Pablo Island. The move received considerable support and was even approved by the Jacksonville City Council in 2012, but it received pushback from some in the St. Johns County portion of the island and was never adopted. Nonetheless, the historic name lives on, waiting for its chance to make the maps. 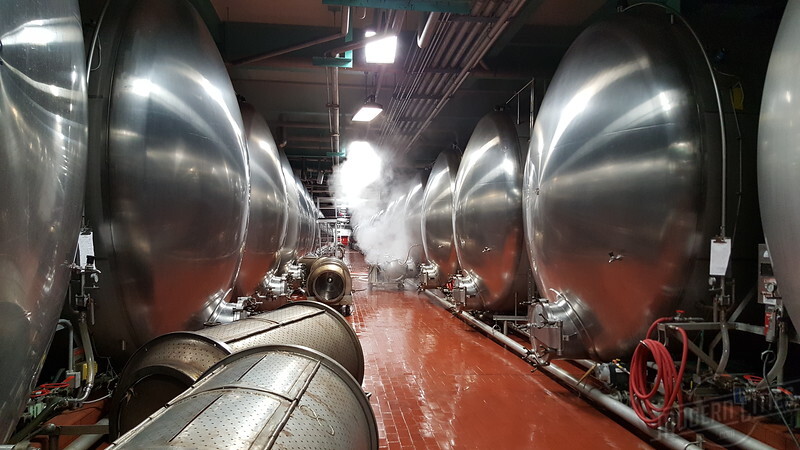 Industrial tourism — visiting places linked to the industries most common in a particular place — is a growing interest among travelers. It could be tailor-made for Jacksonville, where diverse industries like shipping, lumber, coffee, cigars and many more have shaped our history and heritage. What is industrial tourism? While internationally known for tourism, according to the First Coast Manufacturers ...
END_OF_DOCUMENT_TOKEN_TO_BE_REPLACED
Read More