Opinion: I’ll take freedom over a holiday any day 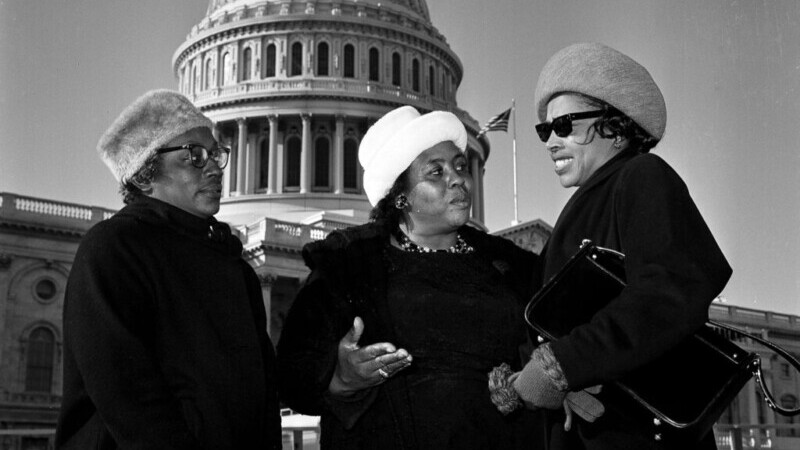 Fannie Lou Hamer, center, is pictured with Annie Devine, left, and Victoria Gray after the three were denied access to the U.S. House floor in 1965. | AP

“I am sick and tired of being sick and tired…nobody’s free until everybody’s free…if I fall, I’ll fall 5 feet 4 inches forward in the fight for freedom.” — Fannie Lou Hamer

All manner of Juneteenth celebrations took place over the weekend at the local, state and national level to celebrate the day the last enslaved people in Galveston, Texas, learned of both their presumed freedom through the Emancipation Proclamation and the end of the Civil War. Their liberation came two months and 10 days after Lee’s surrender at Appomattox and more than two years after Lincoln issued the Emancipation Proclamation.

The 1863 document that is upheld as some great liberatory manifesto was a war tactic. It did exactly what Lincoln said he’d do a year prior. It “freed” slaves in Confederate-held states, though it was unenforceable, and left in bondage those in Union-held border states so as not to lose any more “loyalists” to secession. It was gaslighting at its finest for the 4 million enslaved folks in the Deep South working plantations and building wealth for everyone but themselves while the rebels fought to continue their bondage ad infinitum.

Similarly, the passage of Juneteenth last year as a national holiday is gaslighting for the 41.6 million Black Americans living in the U.S. today. Black people are supposed to be pacified with a paid day off from work when what we’re really after is the passage and signing of the George Floyd Justice in Policing Act of 2021, the John R. Lewis Voting Rights Advancement Act of 2021, the full passage of the Black Maternal Health Momnibus Act of 2021, or any number of climate change initiatives included in the Build Back Better Plan President Joe Biden proposed upon taking office.

But instead we get a holiday?

All we get is a holiday!

It’s not lost on me that all of the aforementioned laws stalled in Congress would do real work in helping Black people in this country live truly free lives by first helping us to live. Black people are 2.9 times more likely to be killed by a police officer than white people. Since the 2020 election, Republican-controlled legislatures across the country, including here in Florida, have passed laws limiting access to the ballot and making voting more restrictive. Black women are now — in the COVID-19 pandemic — three to four times more likely to die in childbirth than are white women. Infant mortality is the highest among Black infants, at 10.3%. Black people, because of segregation and red lining, live in communities that generally have poor air and water quality because the neighborhoods, like Jacksonville’s Fairfax area, were built on top of toxic land that poisons us.

For these reasons, and many more, I have been reluctant to be swept up by the narrative language of Black parenting today, which extolls the virtue of raising “free Black children.” I smile when I hear Black parents say it. I grin wide, showing my gap, when I hear Black children parrot back what their parents have put into them. Yet it is not something I have given my own children. I’m far too cynical and too attuned to the ways of this country to fill my children with illusions of my imagination or the hopes of racial progress I may never see in my lifetime.

What we have is the illusion of freedom predicated on education, career, salary, the nature of my marriage and where we managed to stake our homestead before the market went nuts. My children don’t hear gunshots at night like I did growing up. They won’t see the police raid a crack house or two, like I did growing up. My children are zoned for A-rated schools and don’t have to test into them to attend like I did. So much of their lives has been constructed to be easier, better, albeit freer. But opportunity does not equate freedom. They are, after all, still Black.

I worry about my son as he ages — as his body grows, his muscles define and his skin darkens from hours playing in the sun. And while I don’t have the same insidious concerns after my daughter, because she’s only 1, they will eventually develop because to be Black and female is to be underestimated, gaslit and manipulated while also being paid less but expected to do more — like, you know, save humanity from its worse impulses.

I can’t bring myself to call them free Black children knowing what I know about the obstacles that may set themselves in the paths of their opportunities. The same as I didn’t go out of my way to celebrate Juneteenth. I’ll take my day off while still getting paid.

Cut the check and run me my money. That’s the least you can do in the absence of true freedom.