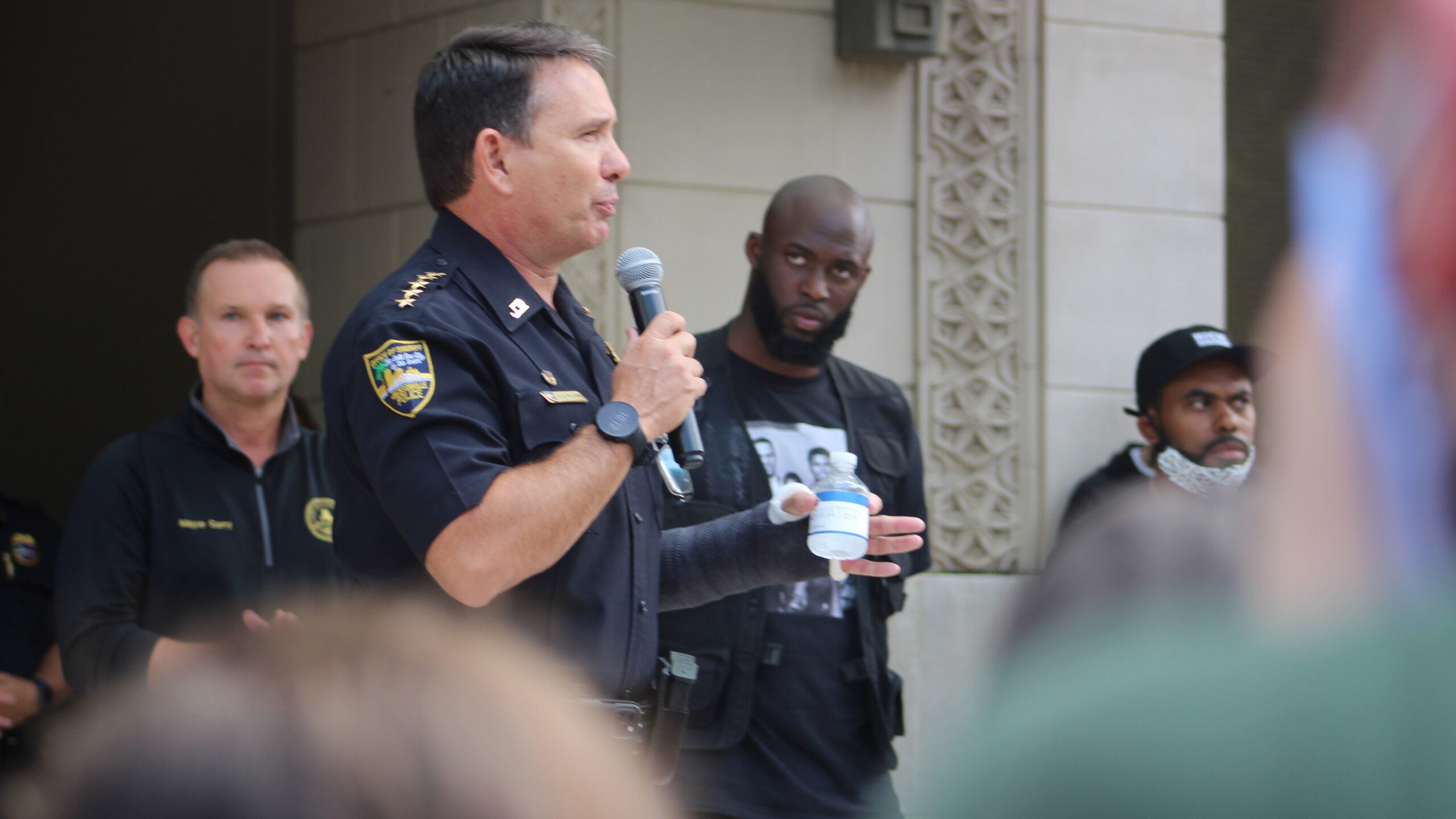 Jacksonville’s office of general counsel is set to weigh in by 2 p.m. Thursday on whether Sheriff Mike Williams should be removed from office after he moved to Nassau County last year and continued to serve as sheriff, which violates the city’s charter.

Council President Sam Newby asked for the legal opinion after The Tributary reported last week that Sheriff Williams had sold his Northside Jacksonville home in March 2021 and moved to Nassau County.

According to Jacksonville’s charter, “if the sheriff should die, resign, or remove his residence from Duval County during his term of office, or be removed from office, the office of sheriff shall become vacant.”

State lawmakers in 2010 undid a law that required sheriffs to live in the county where they work.  Williams has pointed to the lack of a state residency requirement to defend his move out of Jacksonville. “I feel strongly that there’s an inconsistency between the city charter and state law,” Williams told reporters Monday. “I don’t see any scenario where I’ll resign.”

According to Jacksonville’s charter, if a sheriff leaves town, the governor should appoint an interim sheriff until the city can hold a special election. Here’s what the six candidates vying for William’s role, and other city leaders, have to say about the controversy:

Lakesha Burton (D): “I’ll leave political discussions about where Sheriff Williams lives to the media and City Council. I’m laser focused on how I can work with citizens next year as your next sheriff to positively impact Jacksonville for generations. This is my hometown and my children’s home town. It has a problem with increasing violence. Ask me what we can do to address that and you’ll find I have a lot to say.” (emailed statement to Jacksonville Today)

Wayne Clark (D): “The thing that I see as I go about watching what’s going on is we have an absentee sheriff that when we have tragedy in our community, we don’t hear from the sheriff. So I think that there’s a lack of leadership coming from the top and accountability is where that starts.” (speaking broadly about his campaign in an interview with Fred Matthews)

Tony Cummings (D): “When a person is put in FEAR of out-of-control violent crime in Duval County, they will generally seek safety at a friend’s house in Nassau County…..Makes perfect sense to me! When in FEAR you either Fight or Flight (i.e., run)….and our sheriff chose Flight.” (via Twitter)

Ken Jefferson (D): “It may be completely hypocritical to live outside of the city where you were elected, but it is not immoral. I believe this current administration is communicating extremely clearly about where their heart is. Where your heart is, is also where you make your home. We need leadership that will not just take an oath to serve but also understands your heart should be where you serve. If I’m elected I will live where I serve.” (emailed statement to Jacksonville Today)

Mat Nemeth (R): “At this time, like the rest of our community, we are waiting to see what the General Counsel has to say about the matter. I am currently a Duval County resident and plan to remain so.” (reporting by News4Jax)

Thomas T.K. Waters (R, endorsed by Sheriff Williams): Did not immediately respond to a Jacksonville Today request for comment

Mayor Lenny Curry: “I have worked with and served with Sheriff Williams @jsosheriff for almost 7 years. He is always engaged, present and cares deeply about this community.” (via Twitter)

Councilman Aaron Bowman: “We’ll see what happens when the opinion is released … If it goes where I think it’s going, we’ll probably have a special council meeting and put it on the ballot for August.” (reporting by The Florida Times-Union)

Councilwoman LeAnna Cumber: “I fully support our law enforcement officers and respect Sheriff Williams’ service. I look forward to hearing more from the Sheriff about the residency issue and closely reviewing the General Counsel’s analysis. I took an oath to uphold the law and I strongly support the charter’s requirement that Jacksonville’s sheriff live in Duval County. We have many ongoing public safety issues here that demand immediate and uninterrupted attention.” (emailed statement to Jacksonville Today)

Councilman Reggie Gaffney: “I think it’s unfair for the taxpayers to be paying for me and I’m living somewhere else and then my taxes are giving somewhere else. As much as I love the sheriff, it’s only fair to go by the constitution and the charter of the city of Jacksonville.” (in an interview with Jacksonville Today)

Councilwoman Joyce Morgan: “As a city council member when I registered and filed to run, I filed under the impression that I have to live in the district that I serve. So I think that is the expectation and I think that’s what all the citizens would say.” (reporting by News4Jax)

Councilman Ron Salem: “I would hope that the sheriff would go along with whatever the general counsel says.” (reporting by The Florida Times-Union)

Jacksonville Today’s Will Brown contributed to this story