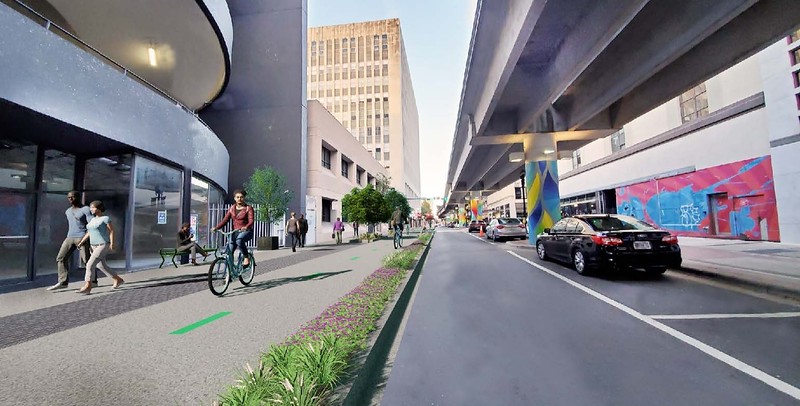 Driven by adaptive reuse and historic incentives, Jacksonville’s Downtown Northbank is experiencing a veritable renaissance of new development. Here’s a look at four new projects that have sprung up in the last month.

We’ve spent much of the last year covering the explosion of development projects quietly happening in the Downtown Northbank. With at least 14 major projects moving forward by the close of 2021, the Northbank Renaissance is one of the major Urban Core trends we’re following in 2022. Well, the development train keeps rolling: Within the last month alone, developers have announced four more large-scale projects.

Contrary to prevailing folk wisdom that old buildings are harder to redevelop than empty lots, most of these developments are adaptive reuse projects in buildings that already exist. The projects reveal the efficacy of the city of Jacksonville’s recent investment in historic redevelopment incentives, as most have come online since the Downtown Investment Authority and City Council rewrote the book on historic incentives in October 2020, increasing the amount of city money available to help get these types of projects off the ground. Additionally, as all these projects are all located within an easy 1/4-mile walk from James Weldon Johnson Park, they’re an excellent example of the “Three C’s” principle that sparks revitalization in urban neighborhoods of all sizes: the clustering of complementing uses within a compact setting. Being in such a compact, walkable area greatly increases the projects’ chance to increase vibrancy in the Downtown Northbank.

On Saturday, January 22, The Jaxson team will host a Northbank Renaissance walking tour exploring these sites and the potential they bring to Downtown Jacksonville. Tickets are $20 and tours begin at James Weldon Johnson Park at 9 and 10 am. In the meantime, here’s a look at four recently announced projects taking park in the rebirth of the Northbank core.

Located at 300 W. Adams St. in the heart of the Northbank, the Hildebrandt Building was constructed between 1926 and 1927. The six-story building was developed by capitalist W.J. Hildebrandt, the brother-in-law of Robert Kloeppel, a hotelier who owned the long-demolished George Washington Hotel across the street.

More dramatically, the developers intend to replace the surface parking lot next to the Hildebrandt Building with a residential infill development. It’s still in the planning stages, but Urban Investments Group hopes to build a new mixed-use tower featuring apartments, parking for both structures and ground-floor retail. “We want to put an icon in Jacksonville,” Urban Investments Group partner Dror Zanani told the Jacksonville Business Journal. “We want something that 100 years from now is not going to be out of style or look bad.”

A longtime Jacksonville institution, Furchgott’s Department Store was founded in 1868 by Leopold Furchgott. The current art deco building at the corner of Hogan and Adams Streets opened as the company’s flagship store on October 8, 1941. The first department store in Jacksonville with elevators, the six-story building contained 65,000 square feet of retail space and a basement. Furgott’s closed the store on March 31, 1984, hoping to move into a smaller Downtown storefront. Those plans failed to materialize and Furchgott’s became one of many department store chains to abandon Downtown Jacksonville at the time. The upper floors have remained vacant ever since, while the ground floor and basement have been home to retail and restaurants; the current tenant is De Real Ting Cafe.

In March 2020, Lotus Commercial USA acquired the long underused building. Lotus founders Soo and James Gilvarry pursued historical landmarking for the building, making it eligible for renovation incentives. Last week, Lotus announced its plan to undertake a major adaptive reuse project. The plans call for 40 one- and two-room apartments on the upper floors, three retail bays and office space on the ground floor, and amenities and storage in the basement. Plans also illustrate the addition of outdoor seating along Hogan Street, tying the project into the Hogan Street Link of the Emerald Trail system (more on that in a minute).

Renovations began in February 2021 on the historic Thomas V. Porter House at 510 N. Julia St. Originally a private residence, the mansion was designed by architect Henry John Klutho and completed in 1902, one of the first Downtown buildings completed after the Great Fire of 1901. By 1981 the building had deteriorated and faced being condemned. To save it, KJB Architects bought and renovated the structure, which they used as their headquarters until 2017.

In August 2020, JWB Real Estate Capital acquired the building and most of the empty block around it for $2.6 million. This is just one of several major Downtown moves the company has made in the last few years; others currently moving forward include the Florida Baptist Convention Building and Old Federal Reserve Bank. JWB is undertaking $200,000 in interior renovations for ADA compliance and to update the bathrooms in the Porter House. Their restoration plans include 16,000 square feet of office space in the three upper floors and 1,272 square feet of restaurant space in the basement; a vacant parcel south of the building will be converted into outdoor restaurant seating.

JWB President Alex Sifakis has also announced plans for a major infill development in the empty lots around the Porter House. This would include a new building of approximately seven stories, with apartments and ground-floor retail along Church, Adams and Pearl streets. In December 2021, JWB acquired the First Baptist Church’s “lighthouse” parking garage at 721 N. Pearl St. for $5.9 million. Built in 1998 and known as First Baptist Garage No. 4, the 809-space structure will support the parking needs of the Porter House block and nearby JWB development projects.

The result of a public-private partnership between Groundwork Jacksonville and the city of Jacksonville, the Emerald Trail is a proposed $184 million signature outdoor destination that will encompass approximately 30 miles of trails, greenways and parks encircling the Urban Core and linking at least 14 historic neighborhoods to Downtown, Hogans Creek, McCoys Creek and the St. Johns River. When fully completed by 2029, the trail system will connect 16 schools, two colleges and 21 parks among other destinations like restaurants, retail and businesses, with 13 additional schools and 17 parks located within three blocks.

Two Emerald Trail segments are currently under construction: the initial McCoys Creek segment through Mixontown and the [LaVilla Link](https://www.groundworkjacksonville.org/emerald-trail/emerald-trail-jacksonville/) running from the S-Line Rail Trail through LaVilla to Brooklyn. Now, the Hogan Street Link in the Northbank is poised to become the third corridor. Plans for the conversion of Hogan Street into an Emerald Trail corridor were revealed to the public on December 14, 2021, with construction anticipated to begin in October 2022. Stretching along Hogan Street between the Northbank Riverwalk and Hogans Creek, this segment will tie Springfield, the FSCJ Downtown campus and the Northbank to the St. Johns Riverfront. Proposed project elements include a raised cycle track, widened sidewalks, landscaping and shade trees.