OPINION | Changing the urban landscape in 2022

Jacksonville’s Urban Core is growing again after decades of decline, the Emerald Trail has broken ground, and the Downtown Northbank is seeing a veritable renaissance of adaptive reuse developments. Looking forward to 2022, here are four trends that could permanently change urban Jacksonville for the better:

1. The Urban Core is growing again

Released in August 2021, the results of the 2020 Census bore a number of interesting findings for Jacksonville. Among the most notable is that the population of the Urban Core – the area that had been within the Jacksonville city limits before Consolidation in 1968 – is growing for the first time in seven decades.

The population of the 30-square-mile old city of Jacksonville peaked at 204,275 residents in 1950, according to that year’s census, while Duval County’s total population was 304,029. Thereafter, the Urban Core entered a period of precipitous decline due to factors including the redlining of mostly Black urban neighborhoods, the demolition and fragmentation of neighborhoods for highways, and other discriminatory policies of the Jim Crow era. By 2010, Duval County’s population had reached 864,263, but the Urban Core’s population had shrunk to only 104,047, a loss of more than 100,000 people.

Downtown Jacksonville’s population is still well below the 10,000 residents sought by some local leaders – and even at that number, its population density would still be too low to generate noticeable change. Still, the growth is a great sign for Downtown in 2022. As Downtown’s decline stemmed in large part from the decline of the surrounding neighborhoods that historically sustained it, this renewed interest in Urban Core living has great long-term potential to help revive the city center.

One piece of Downtown news has flown under the radar: 14 major development projects are moving forward or recently completed within three blocks of James Weldon Johnson Park. Most of these Northbank projects are just getting started, spurred on by new incentives for historic redevelopment approved by the Downtown Investment Authority and City Council in 2020. While these projects individually are less sexy than ostensible “gamechangers” like the prospective redevelopment of “Lenny’s Lawn” or the Jaguars’ failed pitch for Lot J, all together, they will have a bigger, more immediate impact on the vibrancy of the Downtown Northbank.

As these projects are all located within about an easy 1/4-mile walk of each other, they are an example of the “Three C’s” concept that The Jaxson has long promoted as a common-sense, tried-and-true way to quickly bring life to Downtown’s streets: the clustering of complementing uses within a compact, walkable setting. Most of these projects adapt existing buildings,  putting the lie to a locally common myth as further evidence that preservation, not demolition, has worked for Downtown.

One side effect of growth in urban Jacksonville is gentrification: an influx of new money in a neighborhood that drives property values and prices up, which can ultimately displace and price out current residents. In Jacksonville, this has happened most noticeably in Brooklyn and Springfield, but another Urban Core neighborhood appears to be seeing the early stages of gentrification: the Eastside. Also known as Outeast, the Eastside is a historically Black neighborhood east of Springfield and north of the modern Sports and Entertainment District. This neighborhood has seen increased real estate speculation by outside investors thanks to forthcoming developments around TIAA Bank Field.

From 2010 to 2020, the Eastside’s population dropped slightly by 52, and the proportion of the neighborhood that is African-American dropped more than seven points to 80.6%. Meanwhile the White and Hispanic populations grew by 18% and 122% respectively. These numbers suggest the Eastside is beginning to see the type of displacement that has occurred in similar neighborhoods affected by the same forces.

Eastside, however, has a weapon to fight gentrification: withintrification. Essentially, this is revitalization driven by the needs and wants of people already in a neighborhood, rather than newcomers and outside developers. It means identifying a community’s assets, bringing them together under common objectives, and raising the value of the place at a pace appropriate for uplifting the existing community, rather than displacing it. In the Eastside’s case, this involves a holistic revitalization strategy currently being developed and implemented by neighborhood groups including LIFT JAX and Historic Eastside Community Development Corporation (HECDC).

As part of this effort, LIFT JAX and HECDC are seeking designation of the Eastside as a National Register Historic District. This would make current property owners eligible for grants and tax credits, and lay the groundwork for further culturally-appropriate policies to build up, not tear down, the neighborhood. Other elements include a proposed new grocery store and job training center and several projects embracing affordable housing in both new construction and adaptive reuse plans in order to replace lost housing stock at a cost that doesn’t price out working-class residents. If the Eastside Withintrification plan succeeds, it could serve as a model for other neighborhoods who hope to reap the benefit of revitalization without forcing out its people and culture.

2022 will see continued progress on one of the most ambitious projects happening in Jacksonville’s Urban Core right now: the Emerald Trail. When complete, Jacksonville will boast a 30-mile network of linked pedestrian and bike paths connecting parks, schools, amenities and employment hubs across 14 Urban Core neighborhoods. The project is being facilitated by a partnership between the nonprofit Groundwork Jacksonville and the city of Jacksonville.

The Emerald Trail got a major shot in the arm in May 2021 when City Council allocated $132 million to the project as part of the Local Option Gas Tax. Construction of Phase 1 of the McCoys Creek segment began in June, while the LaVilla Link, connecting LaVilla to Brooklyn and the S-Line Rail Trail, broke ground in September. In December 2021, Groundwork revealed designs for the next phase, which will transform Hogan Street in the Downtown Northbank from the Riverwalk north to Springfield’s Klutho Park. Construction is expected to begin in fall of 2022. 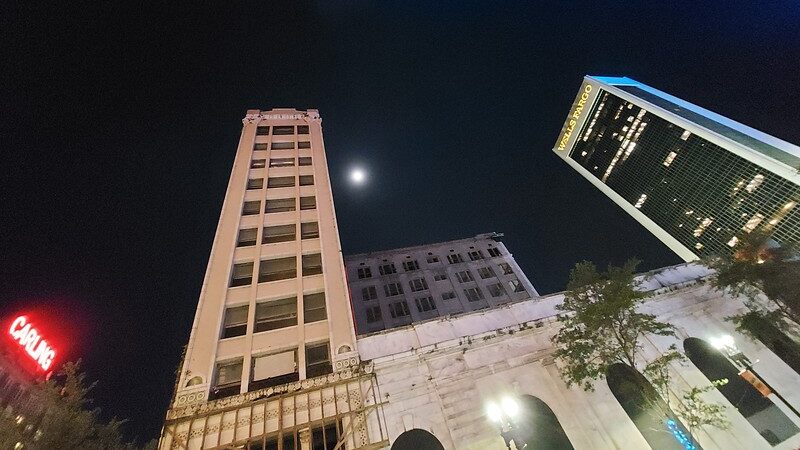 Jaguars owner Shad Khan recently criticized the progress of Downtown revitalization in Jacksonville, saying the area has “gone downhill” over the last decade. Here’s a look at what his comments get right – and what they get wrong. Downtown going downhill? Speaking to the media aboard his yacht Kismet on December 13, Jacksonville Jaguars owner Shad Khan expressed his views ...
END_OF_DOCUMENT_TOKEN_TO_BE_REPLACED
Read More