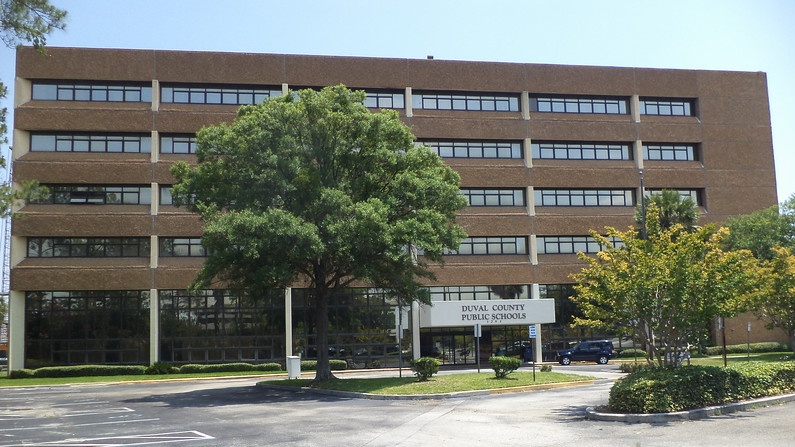 Duval County Public Schools’ announcement that it plans to sell its Southbank headquarters and relocate is welcome news for those who want a more active use on the waterfront parcel. But if DCPS and its 600 employees leave Downtown Jacksonville altogether, it will be a blow that outweighs the benefit of the move.

On December 7, the Duval County School Board voted unanimously to make good on a long term goal: selling its Southbank headquarters and relocating district offices to a new facility elsewhere. The School Board has occupied the six-story, 120,000-square-foot administration building since it opened in 1981. Located on the riverfront, the property, which also includes a large surface parking lot, has long been viewed as a prime spot for redevelopment. The current deal offers up the administrative offices along with three surplus properties; bidders will be able to purchase the properties together or separately.

Duval County Public Schools’ invitation to negotiate indicates it is looking for an “office of the future” with 100,000- to 120,000 square feet of space to accommodate 618 full-time employees. The board set a cost range of $12 million to $60 million over 20 years; the budget will not come from the recently approved half-cent sales tax intended to update the district’s aging schools. Other requirements include a 3,000- to 5,000-square-foot boardroom, a visitor lobby, up-to-date wireless technology and an energy-efficient, environmentally conscious design.

The move, which some School Board members have advocated for since at least 2004, is welcome news to many advocates who hoped to see a more vibrant use for the waterfront property than school offices. Indeed, if DCPS offices move to a more centrally located site in the Downtown Northbank, it could play a part in improving the vibrancy of the area. However, one part of this development should concern anyone interested in seeing the city center thrive: while the DCPS document indicates it would like a location “in a central area of Jacksonville,” the board will apparently explore options that would move its headquarters and 618 employees out of Downtown.

Losing the DCPS employees would be a blow to Downtown at a time when many businesses have shuttered or reduced their office footprint due to the COVID-19 pandemic and modern technologies. It would also run counter to the local government’s own initiatives. Jacksonville leaders clearly understand that bringing office workers Downtown is part of the puzzle of bringing life back to our struggling city core. In August 2021, City Council approved up to $1.8 million in city incentives for Miami Beach-based financial technology company Nymbus to bring its headquarters and up to 407 jobs to Downtown Jacksonville. In addition, CareerSource Florida, the state agency overseeing workforce policy, offered Nymbus a “quick response grant” of up to $2.96 million for adding up to 673 jobs. Back in 2011, the city and state offered EverBank (now TIAA Bank) $5.15 million in incentives to consolidate 1,000 employees from suburban offices to its current Downtown headquarters on Bay Street and add another 200 jobs.

The city government has committed millions of dollars to persuading businesses to locate Downtown and grow the Downtown workforce. Should a local government entity then move its employees out of Downtown, it would be a blow to the progress. At the end of the day, it’s never good to lose 600 employees from a downtown core, especially in the current time of decreasing need for office space.

Should DCPS elect to stay Downtown, it has a once-in-a-generation chance to play a part in the area’s long-awaited regrowth. Being so remote from the walkable heart of Downtown, the current Southbank location is not ideal for contributing to street-level activity. The move to a new location can be a strategic opportunity to breathe life into a specific part of the Northbank core by taking advantage of the Three C’s of urban revitalization: the clustering of complementing uses in a compact, walkable setting. Move 600 employees in, and enhance foot traffic for existing struggling retailers and contribute to a market that fills some vacant storefronts.

DCPS even has a good model for how a government agency can use a new headquarters to help inject life into Downtown streets: Jacksonville’s public utility, JEA. In 2019, JEA was looking to leave the Universal Marion Building for new digs. While the project was quickly overshadowed when JEA became the subject of the city’s biggest public corruption scandal in decades, it survived the ouster of the utility’s previous leadership and is currently moving forward on a less lavish scale than originally proposed.

Also by The Jaxson: The forgotten factor behind Downtown Jax’s struggles

After reviewing several locations, including some on the outskirts of Downtown’s official boundaries, JEA chose a centrally located site at 325 W. Adams St. This move kept hundreds of JEA employees in the heart of Downtown and filled a long-blighted block that had sat vacant since the Hotel George Washington was demolished in 1971. The selection of this site clustered JEA’s new headquarters amid more than a dozen major projects now moving forward within three blocks of James Weldon Johnson Park, allowing it to build on a level of energy it could never generate on its own. It immediately created interest in the leasing of vacant street-level storefronts along West Adams Street between the Duval County Courthouse and Laura Street Trio, a trend that will continue as more and more of these developments come online.

Duval County Public Schools now has the same opportunity to cluster and help build up the walkable Northbank. The board has a choice to make: contribute to Downtown’s vitality, or take away from it.