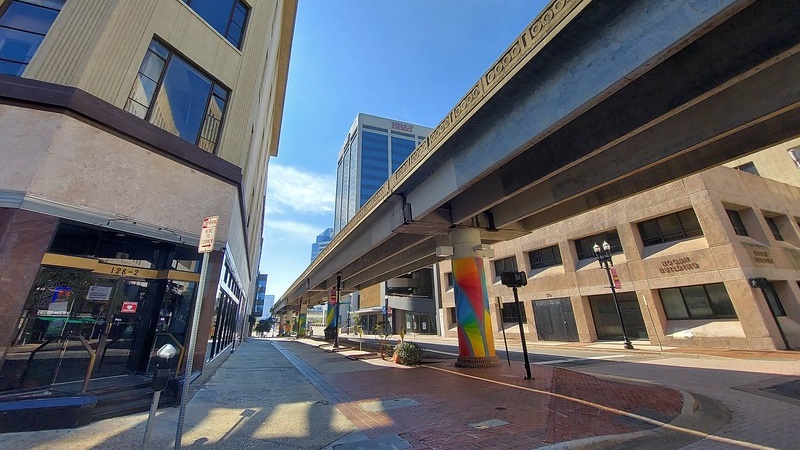 Analyses of Downtown Jacksonville’s continued struggles typically focus on factors within Downtown’s boundaries. Though generally overlooked, one external factor may play the biggest role: the Urban Core neighborhoods that historically sustained Downtown have seen their population plummet by 100,000 since 1950.

Most takes on why Jacksonville’s Downtown continues to struggle while our peers are turning the corner tend to focus on factors internal to Downtown. While there are no shortage of reasons to be found within Downtown’s official boundaries, one major culprit lies outside Downtown itself.

Downtown’s fate has always been tied to that of the neighborhoods around it. These neighborhoods eventually grew into what’s now known as the Urban Core – the area within the old city limits before the consolidation of the city and county governments in 1968. The Urban Core neighborhoods reached their greatest population and density in the mid-20th century, with 204,275 people, according to the 1950 Census. At that time, Downtown Jacksonville was vibrant and thriving. Over the next several decades, however, the Urban Core entered a period of precipitous decline despite rapid growth in the greater metropolitan area. According to the 2010 Census, the Urban Core’s population had fallen to 104,047, a drop of more than 100,000 people.

Downtown declined as the commercial and cultural heart of Jacksonville in the same period. If we hope to revive it, it’s worth exploring the relationship between Downtown and the neighborhoods that make up the 30-square-mile Urban Core for solutions.

Downtown Jacksonville has been the heart of the city since it was founded in 1822. In the late 19th and early 20th centuries, neighborhoods like LaVilla, Brooklyn, Sugar Hill, Hansontown, Springfield, Riverside, the Eastside and Durkeeville grew up around the city center. After the Great Fire of 1901 destroyed most of Downtown, most Jaxsons who had lived there relocated to these outer neighborhoods, and Downtown transitioned into an office, retail and government district.

Despite losing most of its own population, Downtown remained vibrant for decades as the hub of culture and commerce for tens of thousands of people in the surrounding neighborhoods. Those neighborhoods were largely designed to be walkable and well-connected, with gridded streets, mixed-use commercial centers and, for a time, a robust public transit system. Despite growth sprawling out further and further from Downtown, from 1879 to 1936, the neighborhoods continued to be easily reached from the business center via a vast streetcar system that grew with the city. Established by railroad tycoon Henry B. Plant, Jacksonville’s streetcar system carried more than 13.8 million passengers in 1912 and ultimately became Florida’s largest streetcar system, with more than 60 miles of track throughout the city.

Even after streetcars were removed in 1936, the Urban Core benefited from high residential population density, cohesive mixed-use neighborhoods and well-connected, walkable streets.

Starting in the 1930s, Jacksonville’s Black neighborhoods, like very many across the country, suffered from the discriminatory practice known as redlining. The National Housing Act of 1934 spurred the creation of residential security maps that ranked neighborhoods across the countries by the estimated riskiness of mortgage loans.

In practice, redlining resulted in Black communities’ being flagged as locales where banks specifically avoided investing and thus faced declining property values and home equity. In Jacksonville’s Urban Core, Black neighborhoods like Brooklyn, LaVilla, Durkeeville, Moncrief and the Eastside were all redlined, as was Springfield, then a white community surrounded by Black neighborhoods.

Building on the legacy of redlining, one of the biggest monuments to racism in America and Jacksonville in the mid-20th century is the urban highway system. Locally, the expressway system developed by the Jacksonville Expressway Authority, the predecessor to the modern Jacksonville Transportation Authority (JTA), served as a major contributor to the ultimate decline of Downtown Jacksonville.

Proposed as early as 1945, Jacksonville’s initial expressway routes were locally determined by targeting historic African American communities with suppressed property values due to redlining and systemic discriminatory local zoning practices. Paths were also selected to serve as urban renewal projects and new racial demarcation lines between neighborhoods. In the 1950s and 60s, construction of highways including the Jacksonville Expressway (now Interstate 95), I-10, 20th Street Expressway, Haines Street Expressway and the Mathews Bridge Expressway saw the destruction of neighborhoods and the diversion of traffic from Downtown streets. Homes that had been a short walk to shops, public parks, community centers and a library, now overlooked wide highways that split neighborhoods in half and severed connectivity with adjacent neighborhoods. As a result, Downtown Jacksonville lost a significant portion of the population density that historically had sustained it.

Other factors that came into play that contributed to the decline of the Urban Core include the urban renewal of the neighborhoods of Sugar Hill and Hansontown. With thousands purposely removed for redevelopment that was slow to come, the Urban Core’s population rapidly nosedived. This was bolstered by government programs such as the G.I. Bill that were primarily designed to provide housing to white middle- and lower-middle class families. As a result, new suburban communities such as Arlington, Englewood, Cedar Hills and Lake Forest began to grow outside of the Urban Core. Additional contributors to the decline of Downtown include the closure of the Jacksonville Terminal and the relocation of industry that once lined Bay Street and the St. Johns riverfront. In 1950, the Jacksonville city limits were home to 204,275 people, while Duval County’s total population was 304,029. By 2010, Duval’s population had boomed to 864,263, but the Urban Core’s population had shrunk to only 104,047.

Some critics of Jacksonville Consolidation argue that this merger itself is the reason for the decline and continued struggle of Downtown and the Urban Core. However, this decline had started years before Consolidation and was hardly unique to Jacksonville; most North American cities faced the same problems. In fact, this is one of the major reasons voters implemented the strategy. That said, Consolidation did mask the level of decline in the Urban Core. Because the rest of Duval County saw such healthy growth, it was easy to overlook the fact that the population of the historic neighborhoods of the Urban Core continued to drop over the next 60 years.

Where do we go from here?

The decline of the Urban Core since the mid-20th century is often overlooked as a factor in the struggles of Downtown. However, there’s good news on the horizon. After six decades of continuous decline, Jacksonville’s Urban Core is growing again. According to the 2020 Census, the population increased by more than 6,000 residents for a total population of 110,000. While Downtown has received most of the attention thanks to a series of new residential developments and a concerted campaign to increase its population, other parts of the Urban Core including Durkeeville, Springfield and New Town are also growing.

If we hope to see a vibrant Downtown Jacksonville again, we should focus less on the Downtown population and big silver bullet projects, and put more work into building up and connecting the Urban Core. With the Urban Core now growing again, this is an opportunity that Downtown advocates should be gearing up to seize.