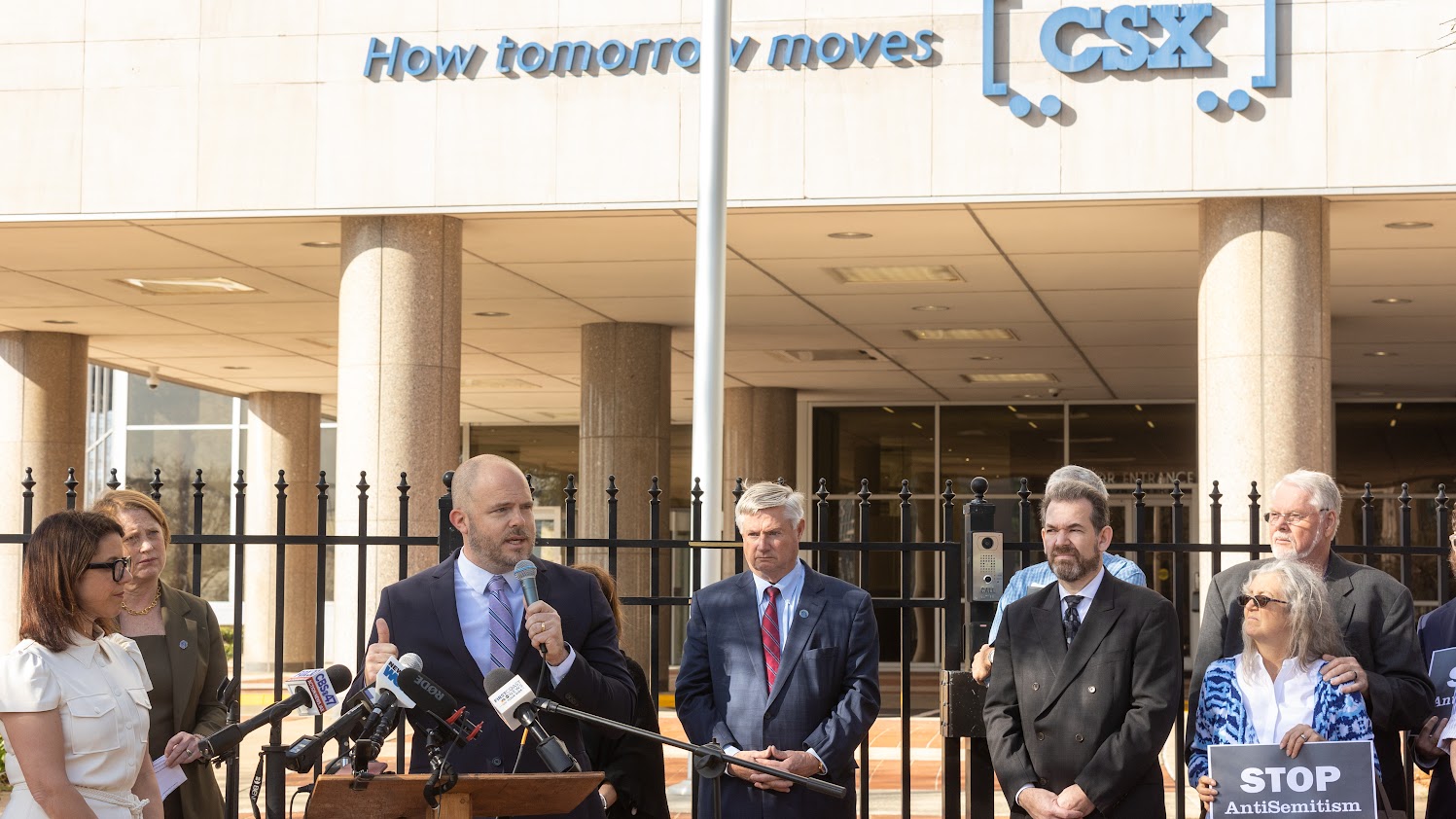 Less than a week after the towering image of a cross and swastika were projected onto the CSX Transportation building Downtown, the City Council will have two emergency bills to review Tuesday night to fight similar actions.

Both bills say the same thing.

The first, filed Monday by Councilwoman LeAnna Cumber and supported by four others, makes projecting any message onto a building or structure illegal without the property owner’s permission. Those who do the deed are liable for arrest and up to 60 days in jail, a $2,000 fine, and confiscation of the equipment used to project it.

A bill from City Council President Terrance Freeman, introduced after Cumber’s, proposes the same thing, with support from 11 council members.

The bills surface months after football games in October when anti-Jewish statements were projected onto the outside wall of TIAA Bank Field as well as a Downtown apartment building. Antisemitic banners also were flown from a nearby highway overpass.

After Saturday’s swastika projection at CSX, the city needs to have a unified voice against all hate groups, said Mariam Feist, CEO for the Jewish Federation and Foundation.

“So whether it is antisemitism, racism, homophobia, anti-Muslim — it doesn’t matter,” Feist said. “Hate is hate, and we need to bond together. We need to have a collective voice to drown out those small voices that are spewing hatred. They do not define Jacksonville. They do not define Northeast Florida. We will define it.”

Jewish Community Alliance CEO Adam Chaskin sought help from Cumber and fellow Councilman Matt Carlucci after learning of Saturday’s projection onto the CSX building. He said he hopes legislation will make it much more difficult for any expression of hate.

“We know this won’t be the thing that stops hate,” Chaskin said. “But it will be one thing that makes it that much harder and brings attention to it so this community can come together around this issue, not just for antisemitism, but hate in general, to help stomp it out wherever it exists and let everyone know that it is not acceptable, that it is against the law.”

Speaking on Thursday in front of the CSX building, company spokesman Bryan Tucker said he learned of the cross and swastika projection on the side of his office building as he sat at Saturday’s Jaguars game.

That’s when he went from “excitement to being completely crestfallen and sad for our city, and angry.”

“We immediately condemned what we all saw,” he said. “I think we all know, as you can see by everyone gathered here and the reaction to it, that this certainly doesn’t represent CSX and it does not represent the city of Jacksonville.”

Other issues of hate speech have also surfaced with repeated airplane banners flying over TIAA Bank Field and Downtown, in support of Confederate monuments that many demand the city remove. 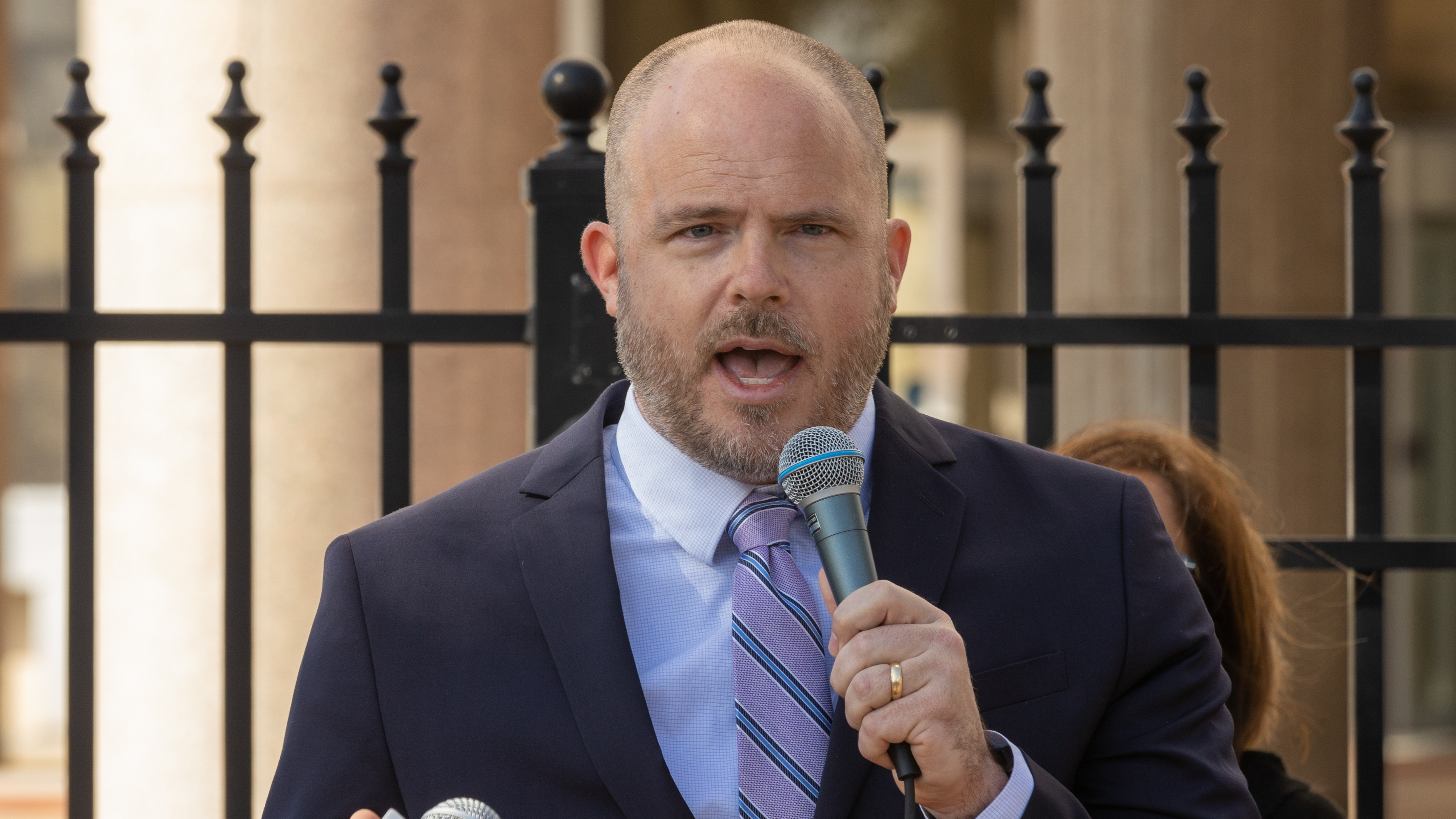 Law enforcement officials said there was little they could do about the banners and projected displays because they are protected as free speech. But on Thursday morning, the supporters of both emergency bills, set for review and a vote at Tuesday’s City Council meeting, announced the reasoning behind them.

Filed after Cumber’s bill, it prohibits unauthorized signs, messages or text from being projected onto buildings or structures without permission of the property owner. Twelve council members have signed on as cosponsors or introducers.

“Hate has no place in our city. This is what unified consolidated government looks like,” Freeman said, pointing to the mayor, sheriff and other council members with him.

The bill “won’t change the hearts and minds of those who spew hate. But it will, however, set a clear and common sense guardrail,” he said. “This legislation complies with the First Amendment as it does not base prosecution on the content of the message, but instead it will apply regardless of the message if projected onto a building that doesn’t have the owner’s consent.”

Curry said he is so tired of a “handful of people that are filled with hate,” projecting antisemitic images around the city, particularly during nationally televised football games. He said the displays do not represent who we are as a city, which he said stands together with the Jewish community. 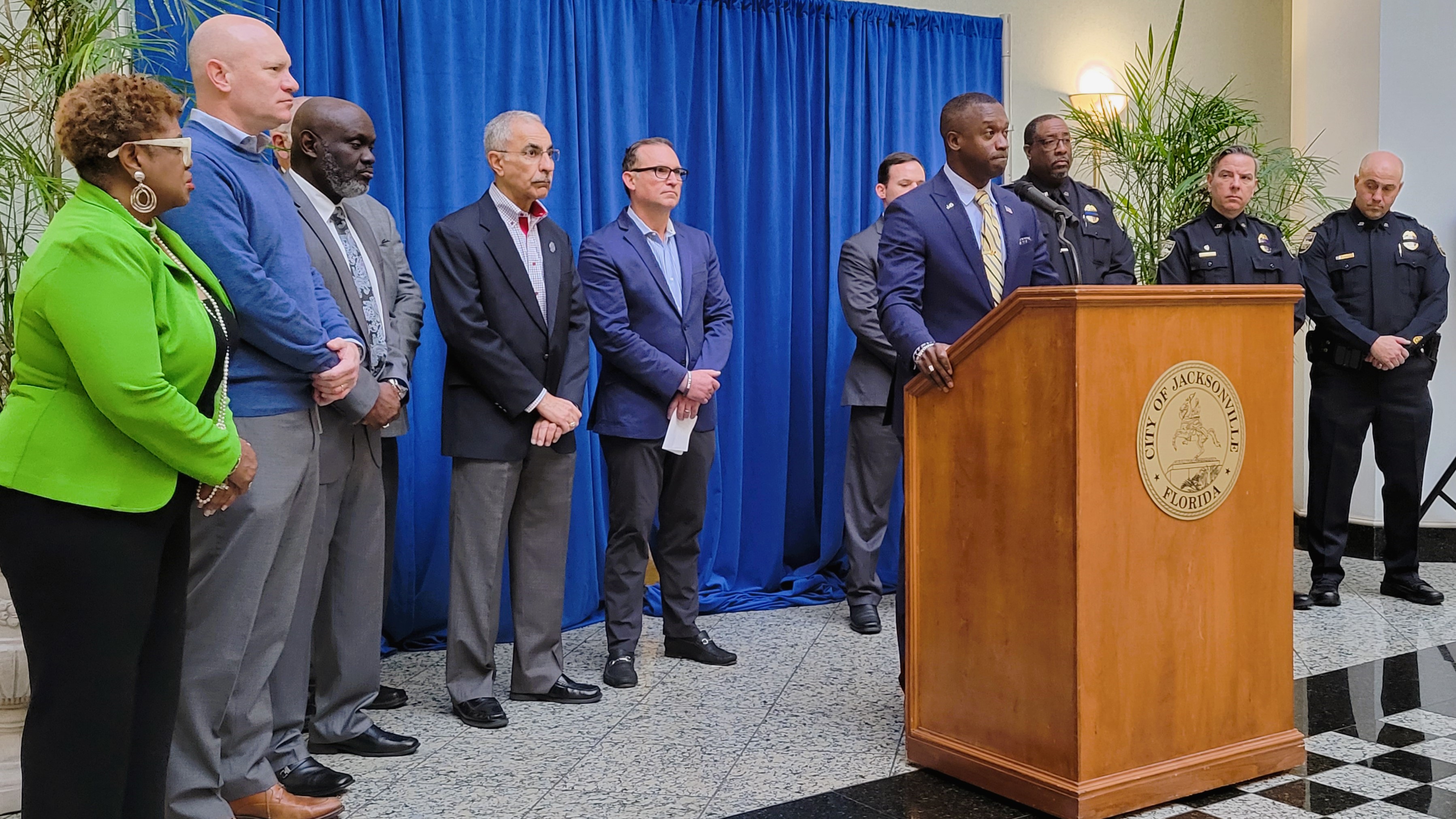 Waters said police know who is projecting the images and now his officers “can address it effectively.” The proposed law has nothing to do with freedom of speech, he said.

“If you project those type of images, I would say you are a hate group,” Waters said. “This is not addressing speech. This is addressing an image projected onto a private business who does not give their consent. Very simple.”

Cumber, joined by Carlucci, council member Randy DeFoor and two others, held her own news conference an hour later at the CSX buildingn. Her bill, which she said is identical to Freeman’s, was born after conversations with Carlucci and the JCA’s Chaskin.

Flanked by council members and the clergy as many others in the audience held “Stop Anti-Semitism” signs, Cumber said her bill will show Jacksonville that they will not allow these messages anymore.

“We need and must find every legal avenue to stop it. These evil antisemitic messages that are being displayed throughout Jacksonville are starting to spread through the state of Florida,” Cumber said. “My hope is that this will be a model for the rest of the country and the rest of the state.” 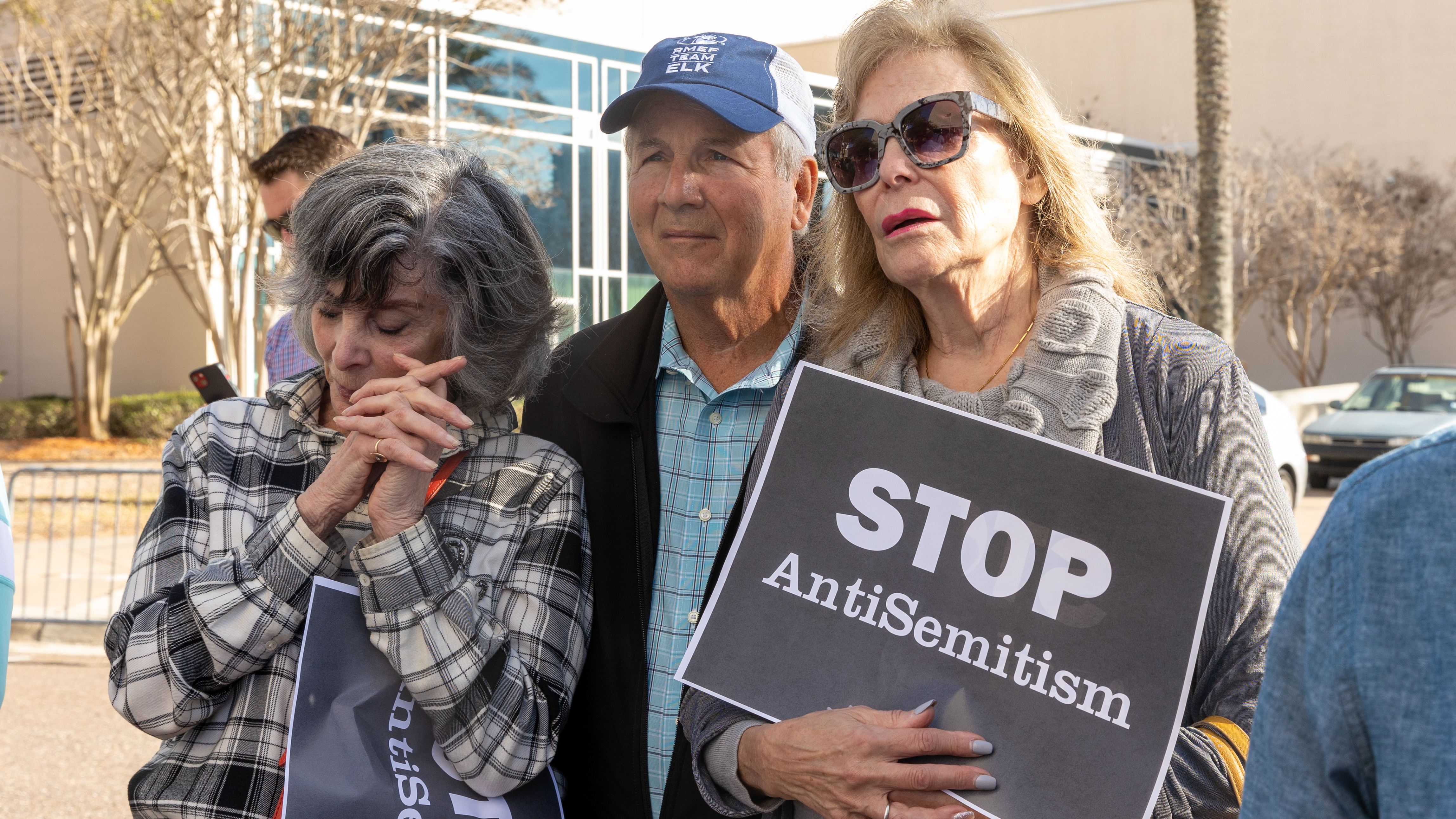 The legislative question remains: With two bills that make the same changes and offer the same penalties, which one will get voted on Tuesday?

Cumber’s bill, filed first, will receive the first shot at a vote since it is at the top of the agenda, she said.

“I am hoping that all of my colleagues jump on board because it really is a time to unite and not a time to be divisive,” Cumber said. “It would seem odd that my colleagues would vote down a bill that is so critical and important to the community, and is identical. So if that happens, it is pure politics.”

Asked whether the two bills could be consolidated, Freeman said 12 people have cointroduced or cosponsored his, and he hopes more will join it by Tuesday.

“Most importantly, let us not lose the fact of this: We have an issue that was impacting our city,” he said. “We have a process and a plan now to address it, and it’s going to be addressed. Who gets the credit? That shouldn’t matter.”

And what about the debate over the Confederate monuments in Jacksonville, which has seen multiple speakers pressing lawmakers to act to tear them down at recent City Council meetings, as well as its own examples of pro-Confederate displays?

In recent weeks, a pro-Confederate banner, paid for by Save Southern Heritage Inc., was flown over TIAA Bank Field prior to Jaguars games. Then in early December, a similar banner with a Confederate flag and the phrase “Curry, Stop Your Hate!” flew over Downtown, also including the group’s web address.

The group, which apparently sponsored both banners, calls itself a voluntary association of people who “revere the South, Southern history and Southern heritage.”

Curry did remove a Confederate soldier statue from a pedestal in the middle of what was then called Hemming Park, later renamed James Weldon Johnson Park. And he has tweeted support for removal of a large Confederate statue in Springfield Park, but the City Council has not acted on multiple proposals to do so.

Cumber, who is running for mayor, said she would discuss that issue at a later date.

Freeman said this bill addresses only projections on private property and not the pro-monument activities. He reiterated his statement in late December that he intends to bring the long-running debate over Confederate monuments to a decision by the council this year. He said he will “lead on issues that are impacting our great city,” like the monuments. 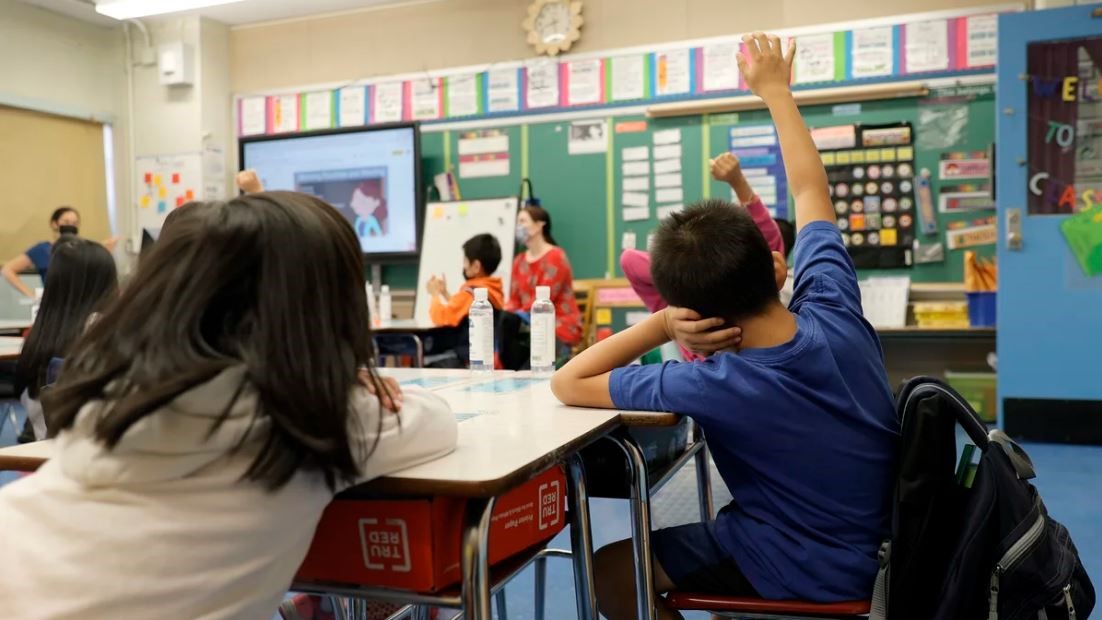 Teachers plan to protest their pay by working only 7.5 hours a day, the amount of time they're paid for. Read More