The Republican-dominated Senate voted 27-13 largely along party lines to approve the bill (SB 2-A), which is expected to pass the House on Wednesday and go to Gov. Ron DeSantis. Sen. Linda Stewart, D-Orlando, was the only Democrat to support the bill, while Sen. Ileana Garcia, R-Miami, and Sen. Erin Grall, R-Vero Beach, voted against it.

Lawmakers began a special legislative session Monday, and it was quickly clear that the bill, which leaders had negotiated behind the scenes, would pass. Senate and House Republicans rejected numerous proposed amendments by Democrats, who argued the measure would not reduce rates and would make it difficult for homeowners to challenge insurers in court.

“Is everybody in a rush to go home?” Sen. Jason Pizzo, a North Miami Beach Democrat, asked at one point Tuesday before one of his proposed amendments was rejected.

Supporters of the 105-page bill said the changes are needed to stabilize the insurance market, which Sen. Doug Broxson, R-Gulf Breeze, likened to being in a “death march.”

The special session — the second such session in seven months on property insurance — came after two years of major problems in the property-insurance system.

For homeowners, that has meant soaring rates and difficulties in finding coverage. For the industry, that has meant financial losses, homeowners pouring into Citizens Property Insurance for coverage and, in some cases, companies going insolvent.

Republican leaders have acknowledged the bill likely would not lead to immediate rate reductions for homeowners. But they say it is designed, at least in part, to draw investments in the insurance market and spur competition.

“Private carriers, hopefully and I believe they will, will be thriving … and want to bring capital to this market,” Senate Banking and Insurance Chairman Jim Boyd, R-Bradenton, said. “National carriers will want to come back to this market and participate. That drives opportunity. That drives competition, which will drive rates down.”

The most fiercely debated part of the bill involves moves to limit lawsuits in claims disputes. Insurers have long blamed lawsuits for driving up costs that lead to financial losses and higher homeowner premiums.

Boyd, who is sponsoring the bill, said litigation-related changes would help stabilize rates and bring more insurers to the state.

“We’re getting at what I believe is the root cause of the problem,” Boyd, an insurance agent, said.

Democrats, however, argued the changes would take away legal rights and force homeowners to pay attorney fees out of whatever money they might receive in lawsuits. Polsky pointed to other issues that have created insurance problems, such as hurricanes and building on the coast.

“We have allowed the (property insurance) system to become what it is, so let’s just blame the attorneys,” Polsky, an attorney, said.

Another major part of the bill focuses on helping provide reinsurance, which is important backup coverage, to private insurers. That includes setting aside $1 billion in tax dollars for reinsurance coverage, after providing $2 billion during a May special session.

Private reinsurance prices have increased, while the coverage has become harder to buy, with the higher costs baked into homeowners’ rates. Fitch Ratings released an analysis last month that said overall reinsurance prices are expected to increase by more than 10% in 2023, pointing to losses from disasters such as Hurricane Ian and “increasing frequency and severity of natural catastrophe claims.”

Property insurers buy a combination of reinsurance coverage on the private market and from the Florida Hurricane Catastrophe Fund, a state program. The bill would essentially offer additional levels, known as “layers,” of reinsurance funded through $1 billion from the state and premiums paid by insurers.

Rep. Tom Leek, an Ormond Beach Republican sponsoring the House version of the bill (HB 1A), said the goal is to provide stability.

“The (new) program’s not designed to replace the private market but to supplement,” Leek said.

The troubles in the overall insurance market have led to massive growth in Citizens Property Insurance, which has more than doubled in size during the past two years to about 1.13 million policies.

But changes to Citizens are often controversial, in part because residents of some areas have few other places to turn for coverage. For example, the bill would phase in a requirement that Citizens customers buy flood insurance, which is not part of typical homeowners’ policies.

Pizzo mocked the flood insurance requirement, saying it would apply to people — such as him — who live in high-rise condominiums.

“Noah didn’t need an ark for something that high,” he said. 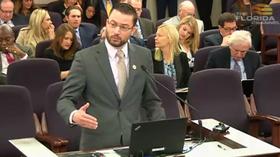 After lawmakers this week passed an overhaul of the state’s property-insurance system, Florida Insurance Commissioner David Altmaier on Thursday submitted his resignation to Gov. Ron DeSantis. Altmaier, who made the resignation effective Dec. 28, has been Florida’s top insurance regulator since 2016. The letter did not detail his future plans. “Under your leadership, we have worked with the Florida Legislature ...
END_OF_DOCUMENT_TOKEN_TO_BE_REPLACED
Read More