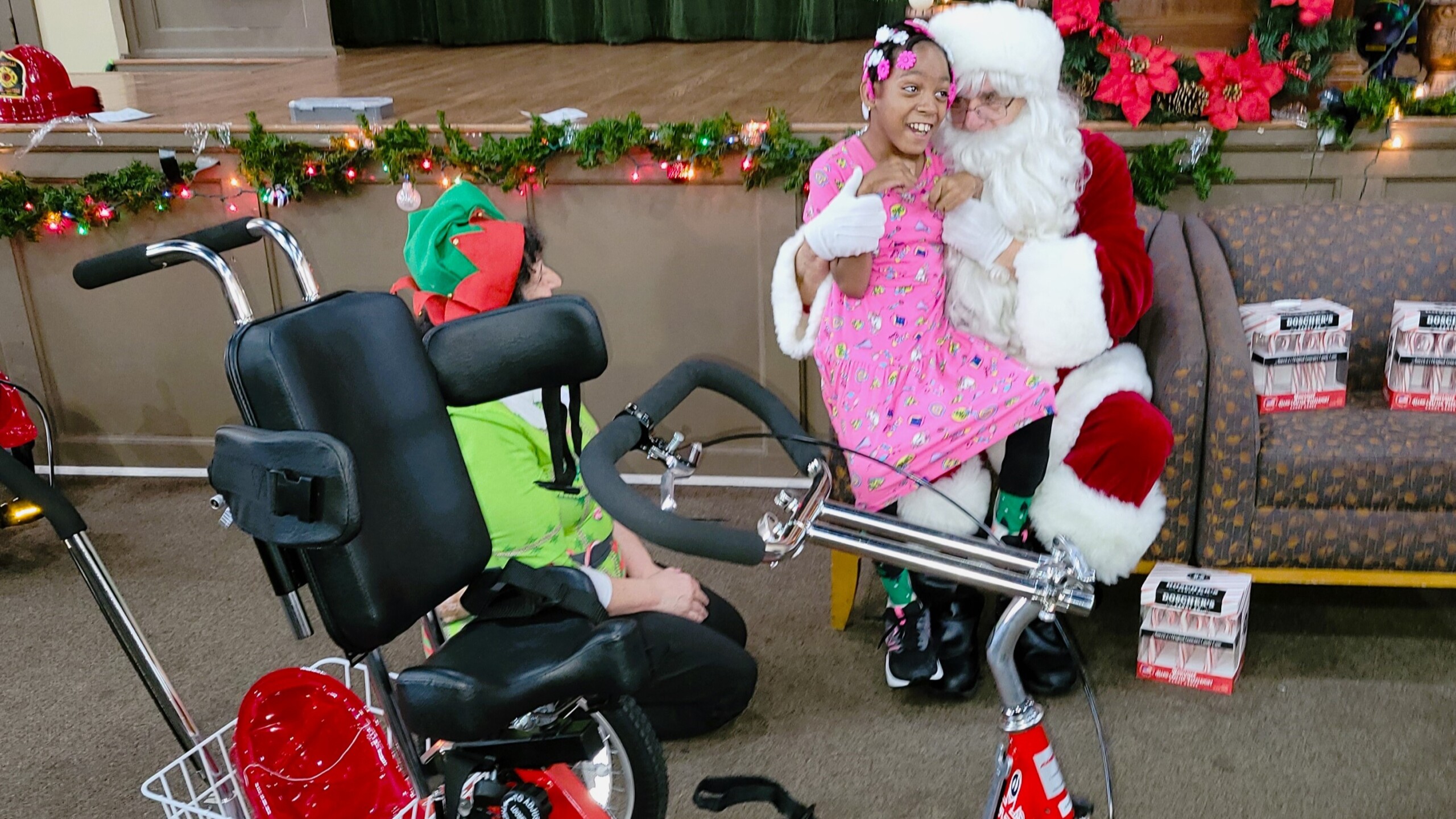 Just for them: Kids with special needs get customized new wheels

Blake Barber was hanging with Santa Claus on Thursday at the Jacksonville Association of Firefighters hall when the jolly old elf asked the pertinent question.

“Where’s this guy’s bike? We have got to have a bike,” Santa said.

James Parkhurst, a technician from Wolfson Children’s Rehabilitation Center, rolled up the red bicycle, built by firefighters along with nine bikes nearby for children with physical disabilities. Within seconds, the 11-year-old boy was belted in to the specially-design supportive seat and grabbing the padded steering arm as Parkhurst Velcroed his feet in the pedals.

“Everybody get out of the way,” Santa yelled. “There he goes.”

At first, Blake didn’t know why he was at the firefighter union hall on Stockton Street when his family brought him there. Then he learned a bicycle from Santa was in store — designed for someone with physical issues like him. 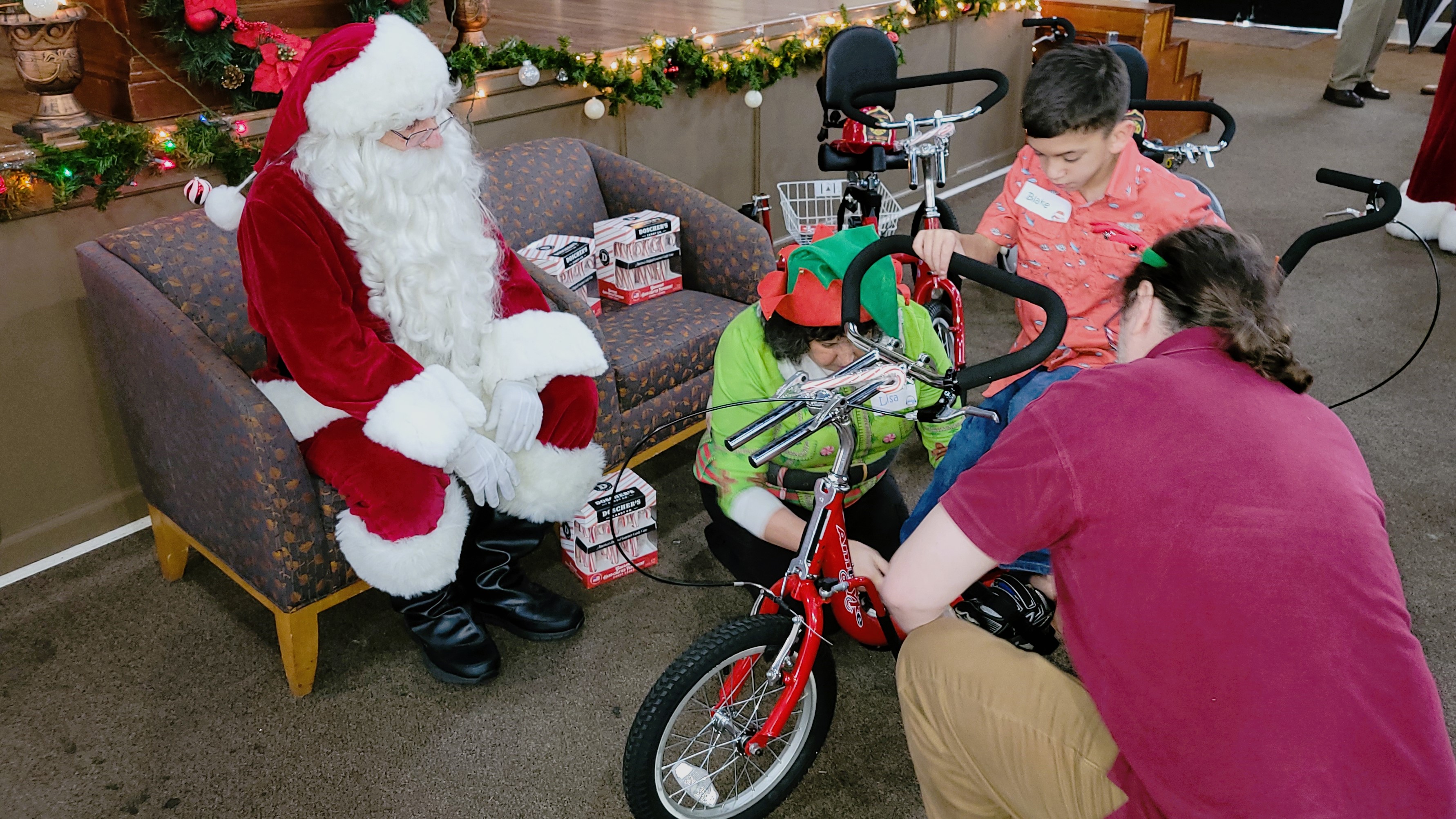 Wolfson Rehabilitation Center builds the tricycles for children who can’t ride a regular bicycle. The firefighters union stepped in to help build them and host the party nine years ago.

The donated AmTrykes tricycles have adjustable padded seats with backrests and seatbelts, plus pedals with straps and a long handle in back for the parents to help steer and push. Some also get a separate handbrake on the rear steering arm so the parents can stop it.

The rehab center has only one staff member who can build them, Wolfson physical therapist Lisa Federico said. So they built 10 other tricycles earlier this year, making the firefighters’ help much appreciated, she said.

“We needed a partner and the firefighters were our first choice. I asked, ‘Will you help us?’ The answer was, ‘Of course,'” Federico said. “These bikes are designed for those kids that need a little extra back support, their feet strapped in, and they need maybe a handlebar to push when Mom gets tired. Our motto is ‘Every child deserves a bike,’ and we want to make that happen.”

Angel Malcolm was all smiles when Santa showed her new tricycle to her as happy tears ran down grandmother Rosa Baker’s face nearby. For the 9-year-old girl, bedecked in pink dress and pink and white flowers in her hair, the bicycle meant she can ride “with Momma.” 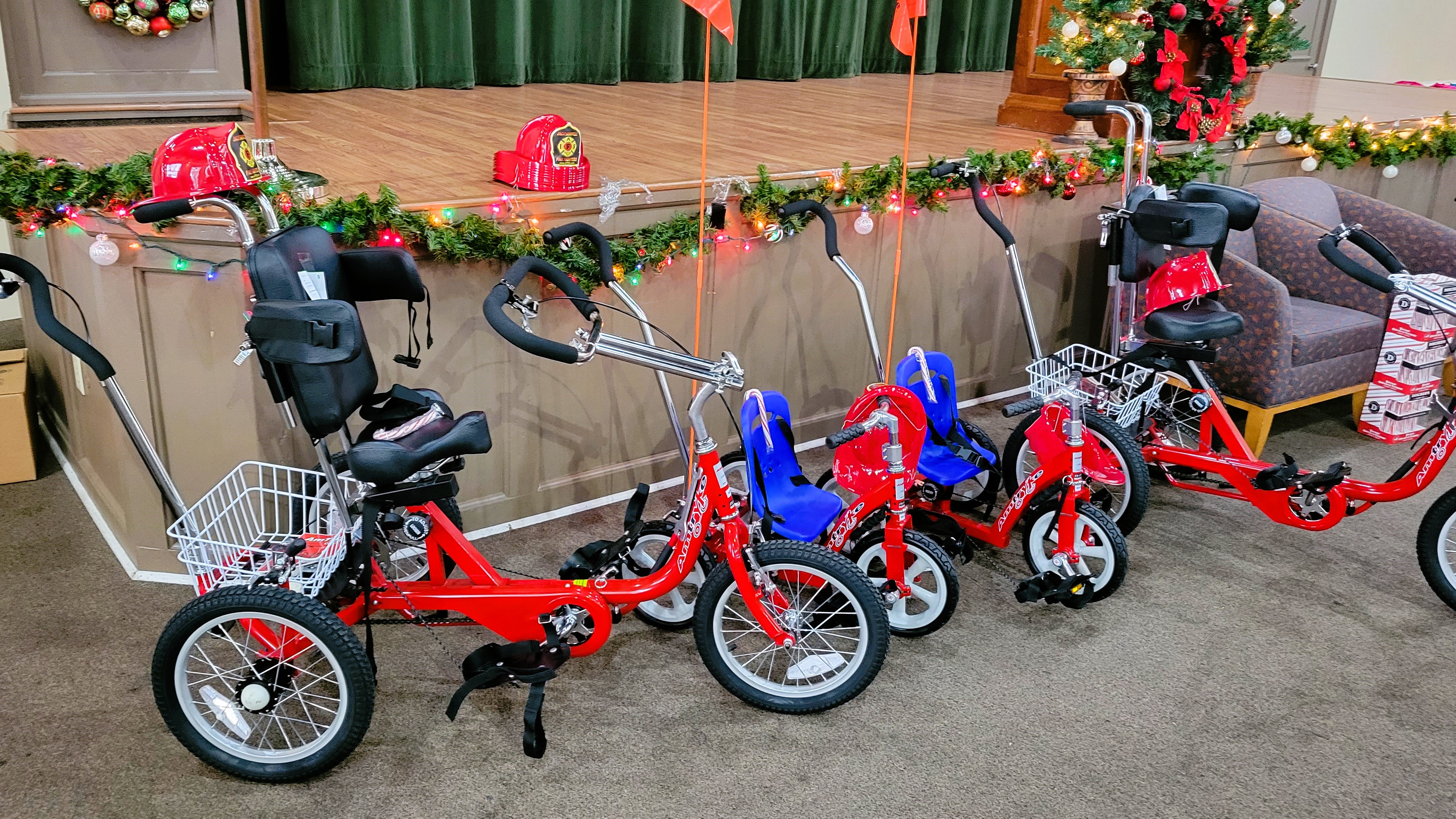 The children who get the tricycles don’t know what’s coming when they and family attend the Association of Firefighters’ annual Christmas party, featuring a barbecued whole pig, roast beef and all the fixings. Firefighter union chief Randy Wyse said many fire stations have toy drives or parties for children in their neighborhoods, but this event is a special one that “does the heart good.”

“At this time of the year we like to do what we can for people who need help so it was an easy fit for us; our guys are pretty mechanically inclined,” Wyse said. “We respond to people’s worst days. The men and women who respond are going to very bad things. This is a point where you can do some service and respond to someone’s need in a positive sense. This helps those firefighters.”

It was pretty special for Baker, happy tears already in her eyes as she waited for the tricycle to be rolled up for Angel. She says what the firefighters do “is a wonderful thing.”

“I am so grateful. This gives her a chance to be free. We can get out and go to the park and she can ride around as I push her,” Baker said. “It gives us a chance to get out, see the world, and give her some freedom. She loves to be out and meet people.” 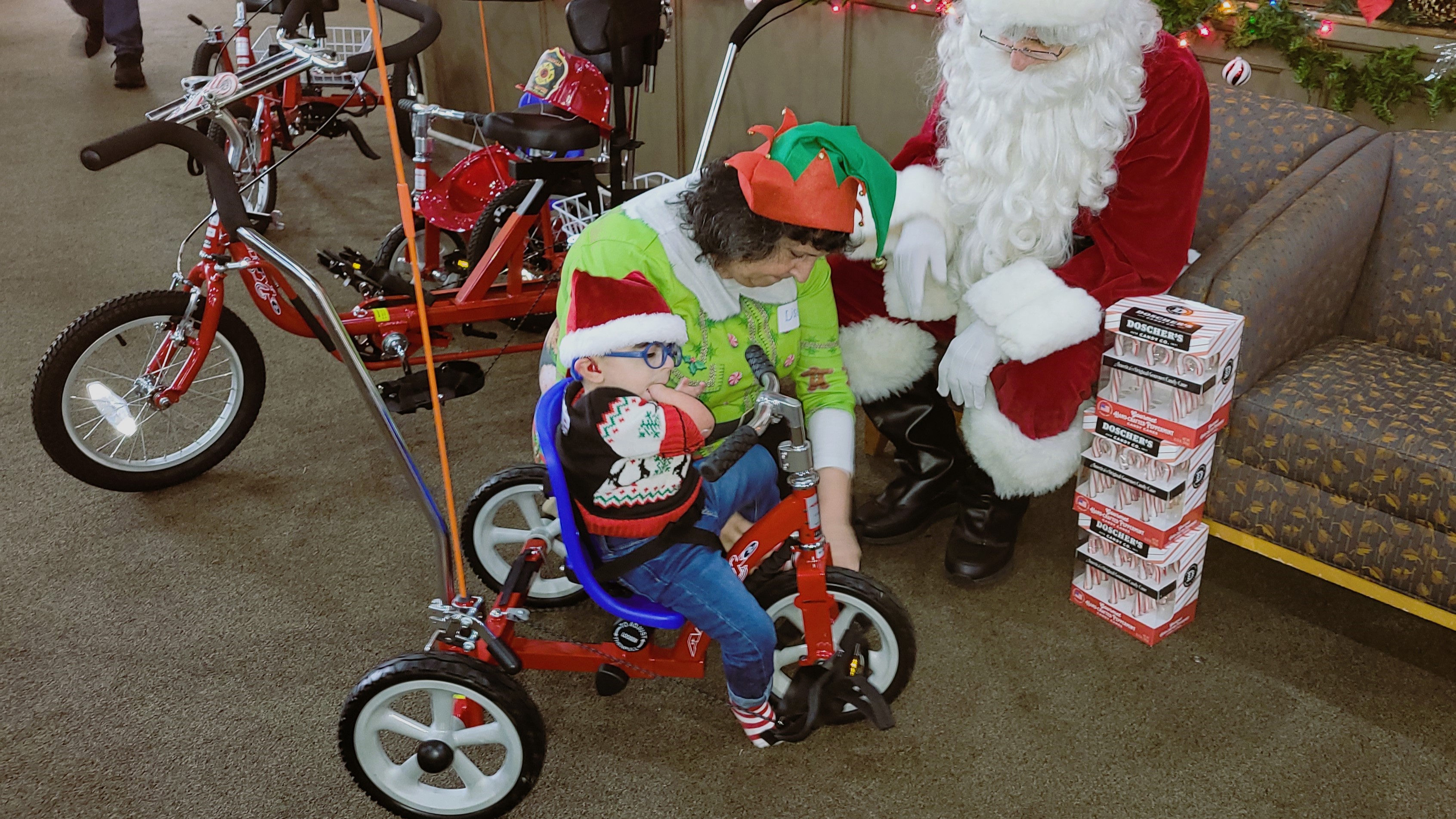 This wasn’t the only holiday event for children this week.

On Wednesday, the Jacksonville Fraternal Order of Police held its 19th Annual “FOP COP’s and Kids” at Walmart at 8808 Beach Blvd. The long-running event teams children with law enforcement officers for a holiday shopping spree, with children nominated by several Jacksonville organizations including Big Brothers/Big Sisters, 100 Black Men of Jacksonville, Police Athletic League and the Jacksonville Housing Authority. Each child is paired with an officer and given a $100 gift card, designed to build relationships between officers and the community. 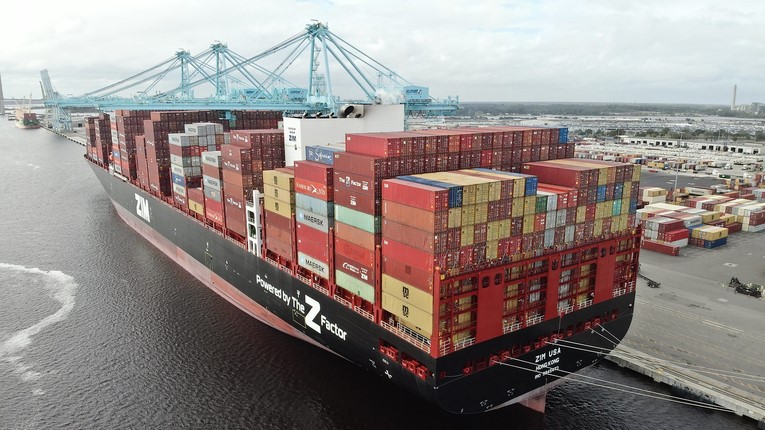 A container ship tying the record for the largest to visit Jacksonville arrived at JAXPORT this week, the Jacksonville Port Authority announced. The ZIM USA has a cargo capacity of 11,923 TEU and is one of four new ships replacing smaller vessels in ZIM’s weekly container service, according to a JAXPORT news release. The recently completed 47-foot harbor deepening project ...
END_OF_DOCUMENT_TOKEN_TO_BE_REPLACED
Read More