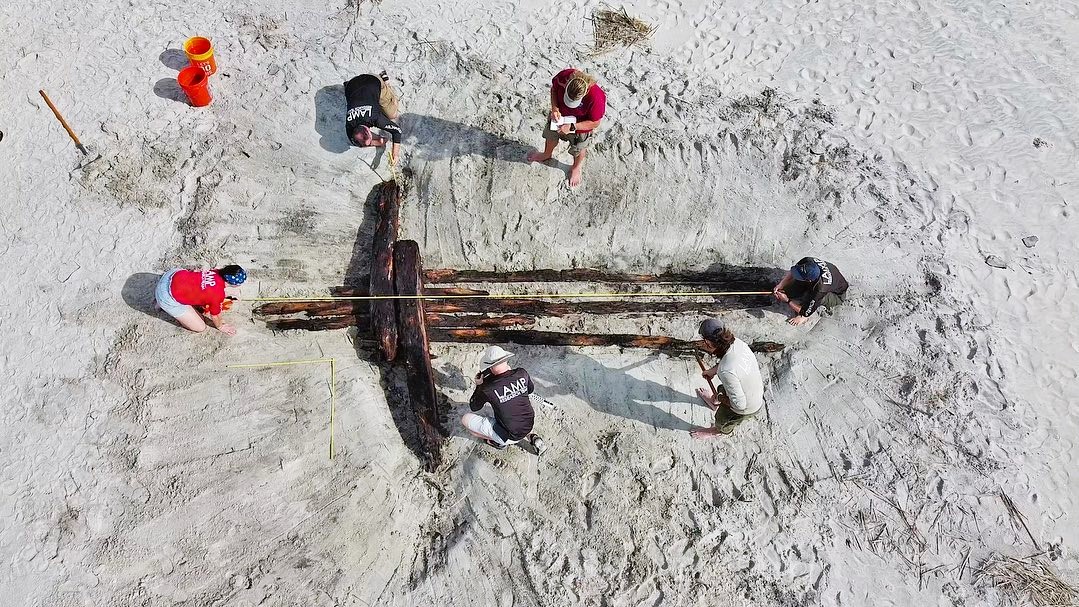 A hunk of wooden hull from the 1800s lies among wave-flattened grasses on a beach of Little Talbot Island, uncovered bit by bit by Tropical Storms Nicole and Ian.

Nearby rests the T-shaped remains of the ship’s bow, more of its weathered wooden beams uncovered by a team from the Lighthouse Archaeological Maritime Program.

Wind and waves initially revealed the wreck’s pieces in 1987, after decades buried in the sand on the barrier island north of Jacksonville. But after Ian in September and Nicole in November, the battered old hull’s ribs reappeared, archaeologist Chuck Meide said. 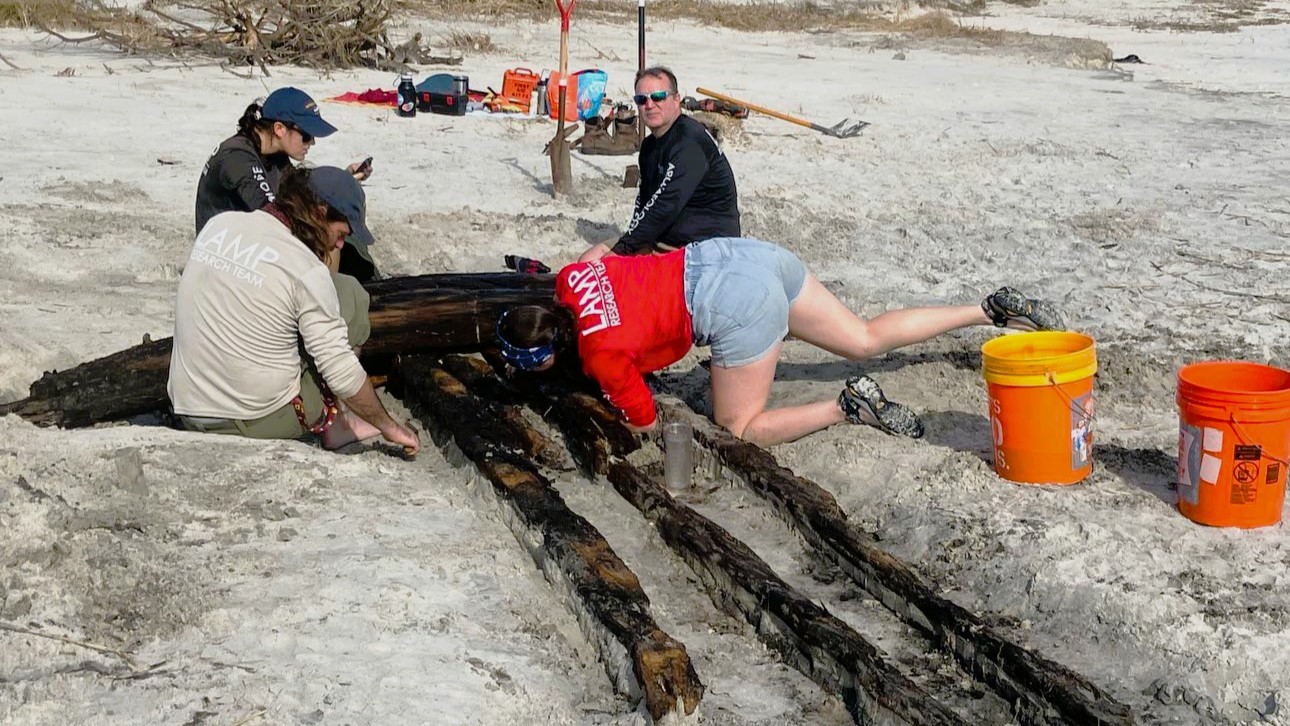 So back they went to the beachfront park off Heckscher Drive, this time trying to find out what this wreck might have been in its sailing days, he said.

“Over the last 30 years, it has been buried and exposed and reburied by storms, and has been moved by major hurricanes,” Meide said. “LAMP came out to assess its condition after Hurricane Dorian, Ian and now Nicole. We are hoping to study the wreckage and see if we can narrow down the date range and geographic origins for the ship, and possibly its identity.”

The Lighthouse Archaeological Maritime Program is the research arm of the St. Augustine Lighthouse and Museum, seeking and preserving the offshore history of the nation’s oldest city. Started in 1996 by archaeologist John Morris and his team, the group’s first underwater surveys targeted more than 50 possible wrecks around St. Augustine, founded by Spain in 1565. 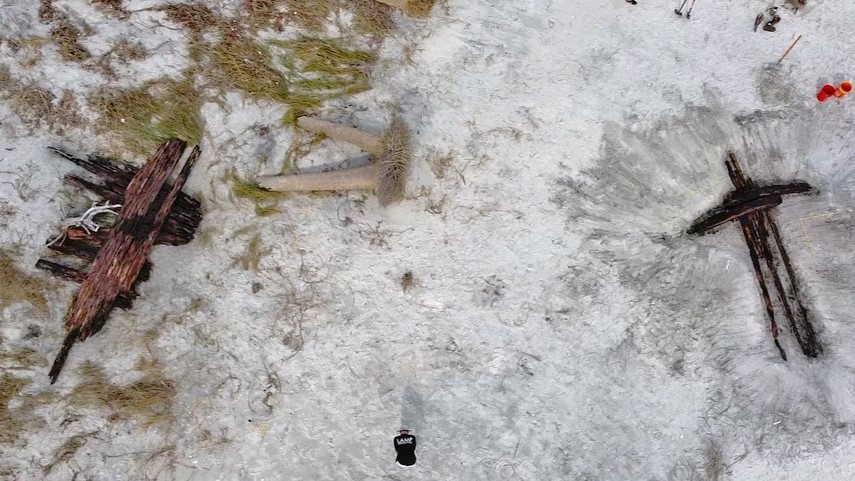 The team’s first major discovery was the British sloop Industry, sunk in 1764 while entering St. Augustine’s harbor inlet, then just south of the current lighthouse. They recovered numerous artifacts including a cannon and tools that never made it to St. Augustine’s then-British outpost.

Since then, the LAMP team has investigated shipwrecks off the coast of Northeast Florida, from Cape Canaveral to the St. Marys River. Many artifacts recovered from ships found underwater or uncovered on beaches are conserved, then displayed at the lighthouse museum. 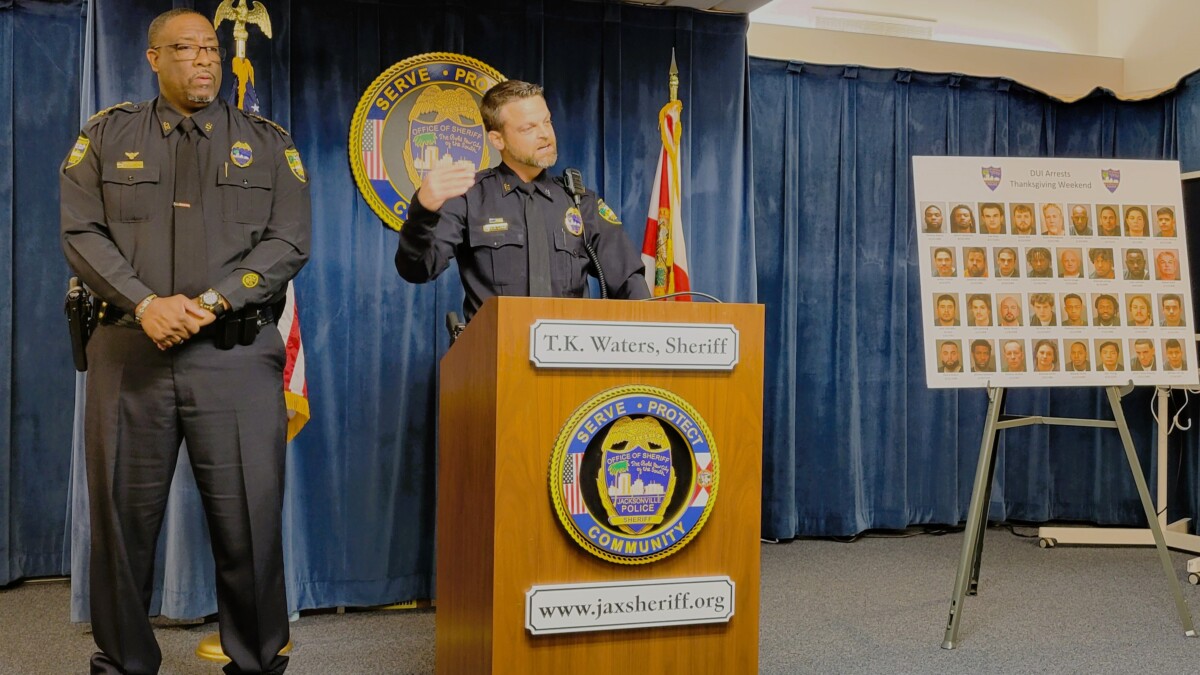 News Police on the hunt for drunken holiday drivers

Be forewarned: Police plan an aggressive campaign to target and stop impaired drivers over the Christmas holiday. The Jacksonville Sheriff’s Office announced the crackdown Friday, also announcing 33 DUI arrests over the Thanksgiving holiday. Deaths from car crashes are far lower than this time last year, the department says. Sheriff T.K. Waters said traffic crashes are one of the leading ...
END_OF_DOCUMENT_TOKEN_TO_BE_REPLACED
Read More