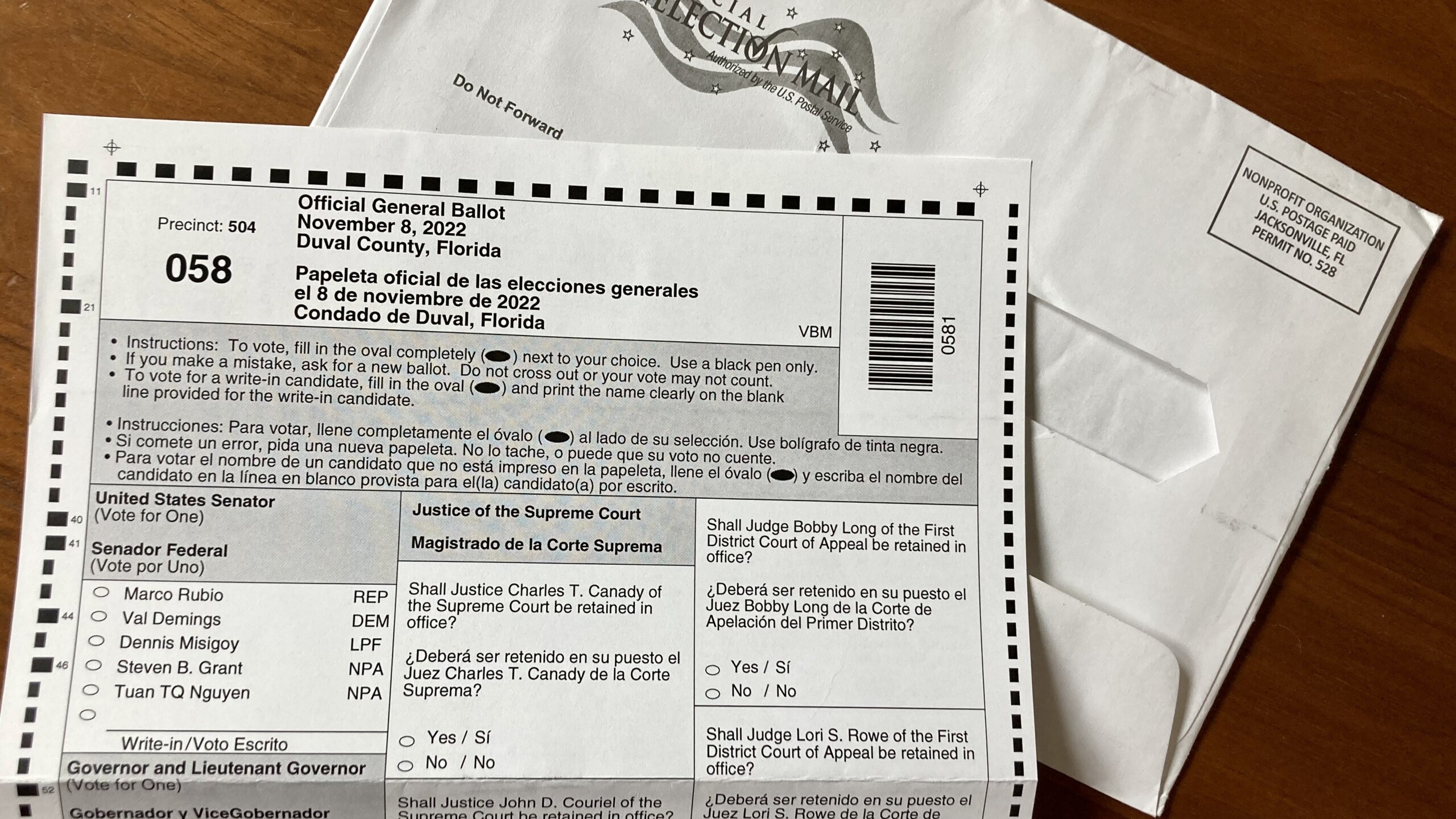 Races in this guide are sorted by largest area of jurisdiction to smallest. Candidates are sorted alphabetically. The Florida Bar approval rating is from an August poll of its members. We included the results from attorneys who said they had “considerable knowledge” of the judge in question.

For appointed judges, the ballot will ask a yes or no question: Do you want the judge to be retained in office? Since the mid-70s, Florida Supreme Court and appellate judges have been appointed to six-year terms by the governor.

Judges have to go before a public “merit retention vote” within the first two years of appointment – and again at the end of their term, if a judge wants to remain in the seat. If most voters say yes, they can stay in place. If most voters say no, the governor has to appoint a replacement (it would also be the first time; no Florida judge has ever lost a retention vote.)

Appointment: Justice Charles Canady was appointed in 2008 by former Gov. Charlie Crist (then a Republican, he is currently the Democratic candidate for governor).

Key rulings: Canady was a frequent conservative dissenter when the court had a more liberal-leaning majority, including in a 2016 ruling that blocked a 24-hour waiting period to get an abortion. He was also one of two dissenters to the court’s decision upholding a requirement for a unanimous jury for the death sentence in 2016. Later that year, he appeared on former President Trump’s list of potential Supreme Court candidates.

Key rulings: A key DeSantis pick in cementing the Supreme Court’s current conservative-leaning majority, Couriel has agreed with rulings that could make it harder for people to sue tobacco companies for smoking-related disease and kept a challenge to DeSantis’ redistricting in the lower courts.

Key rulings: Since joining the bench, Grosshans has largely sided with the conservative majority, including rejecting a challenge to charter schools’ getting voter-approved tax funds and a challenge to DeSantis-drawn redistricting maps. Though an infrequent dissenter, she did join Justices Labarga and Lawson in opposing a ruling that sided with the Florida Bar and admonished a traffic ticket clinic.

Appointment: Justice Jorge Labarga was appointed in 2008 by former Gov. Charlie Crist (then a Republican, currently the Democratic candidate for governor).

Key rulings: The most moderate justice currently sitting on the conservative bench, Labarga was the only dissenter in a 2020 decision that blocked a new, broader intellectual disability standard from back-applying to an 1980s death row case. Larbarga said the ruling results in “an increased risk that certain individuals may be executed.” He was also the only dissenter in a Supreme Court decision to stay out of a lower court challenge of DeSantis’ redistricting plan.

Appointment: Justice Ricky Polston was appointed in 2008 by former Gov. Charlie Crist (then a Republican, currently the Democratic candidate for governor).

Key rulings: Conservative-leaning Polston opposed a majority ruling that blocked a 24-hour abortion waiting period law from going into effect while it was being litigated in 2017. Polston was also the only dissenter in a ruling to create a sixth appellate court, which the other judges said was necessary to compensate for underrepresentation of appellate judges from Jacksonville.

Key rulings: In recent years, Bilbrey has chided the Florida Department of Health and DeSantis administration for dragging its feet in issuing cannabis licenses and upheld the removal of a Confederate monument in Madison, Florida. He also upheld the Gainesville Chamber of Commerce’s tax-exempt status.

Key rulings: In recent rulings, Kelsey disagreed with allowing Florida’s abortion ban to remain in effect while it was being challenged, handed a win to the National Rifle Association in upholding a 2011 state law that punishes local governments who pass stricter gun laws and rejected a transgender woman’s allegations of discrimation (Bilbrey dissented that ruling).

Key rulings: Judge Long upheld that a family couldn’t force Mayo Clinic to administer ivermectin to a Duval COVID-19 patient, said Duval Schools’ mask mandates “cannot stand between parents and their lawful right to make decisions on behalf of their children” and sided with a police union in allowing Tallahassee officers who say they were victims in a police shooting to shield their identities from the public under Marsy’s Law. Long was also on DeSantis’ list of finalists for the Florida Supreme Court this summer.

Appointment: Judge Lori Rowe was appointed in 2009 by former Gov. Charlie Crist (then a Republican, currently the Democratic candidate for governor).

Key rulings: Rowe sided with JEA in a challenge to a change in reimbursements for customers with solar panels, upheld a 7.5-year limit to workers’ compensation claims and upheld the state’s order that schools offer in-person teaching in 2020. Rowe was also on DeSantis’ list of finalists for the Florida Supreme Court two years ago.

Key rulings: In recent years, Winokur upheld a ruling requiring a 17-year-old to have parental consent to get an abortion, tossed out a verdict against a tobacco company and sided with life insurance companies in a dissent opposing applying new regulations retroactively.

Covers more than a dozen Northeast and Central Florida counties, including Flagler, Putnam and St. Johns

Appointment: Judge Jay Cohen was appointed in 2008 by former Gov. Charlie Crist (then a Republican, currently the Democratic candidate for governor).

Key rulings: Cohen sided with Wal-Mart in a union trespassing dispute in 2016, ruled in favor of Planned Parenthood to use a covenant-restricted Orlando-area property in 2014 and ruled last year that security footage on buses are exempt from public records.

Key rulings: Edwards has ruled that state and local officials don’t have to pay damages to bars they forced to close during the early days of the COVID-19 pandemic, dissented to overturning a lifetime pet-ownership ban for a Volusia County man who had been arrested for killing a dog, and struck down a drug sentence handed down by a St. Augustine judge with a reputation for refusing plea deals in opioid cases.

Key rulings: Lambert dissented to a ruling (handed down by Edwards and Cohen) that sided with a tobacco company. He also sided with the ruling in Wal-Mart’s favor in the union fight and favored an online news site in a public records battle with Citrus County in 2016.

Key rulings: DeSantis came under criticism for his choice of Federalist Society (a libertarian and conservative legal organization) member Mary Nardella last year, due to her limited trial experience. In her time on the appeals court, she has sided with a decision that ruled Orange County’s human rights ordinance unconstitutional and in conflict with state law, and called for a new murder trial for a defendent whose request to represent himself was denied.

Key rulings: Traver sided with a teacher after a school district tried to bar him from keeping a gun in his car on campus, ruled against an insurance company that tried to deny a third-party claim after Hurricane Irma, and sided with overturning a sentence handed down by the St. Augustine judge reputed for refusing plea deals in opioid cases.

Key rulings: Wozniak is an active Federalist Society member. Rulings include one in favor of homeowners for additional Hurricane Matthew damage claims. She also signed off on the ruling that part of Orange County’s human rights ordinance was unconstitutional.

County and circuit judges are elected, not appointed, to their six-year terms. Primary elections narrowed the field to the top two candidates for each seat, who are in run-offs in the general election.

Background: Gainesville-based Sean Brewer has worked as a prosecutor for the state attorney’s office, including as division chief for felony crimes, crimes against women and children and felony gun crimes. He garnered 29% of the Alachua County primary vote in August.

Background: Gainesville-based AuBroncee Martin has worked as a public defender for 24 years and an adjunct professor at the University of Florida Levin College of Law. He led the Alachua County primary with 34% of the vote in August.

Fundraising: $48,947, according to state finance records

If you see a judge on your ballot who’s not on this list, let us know! Contact reporter Claire Heddles at claire@jaxtoday.org.

Jacksonville sheriff candidates Lakesha Burton (D) and T.K. Waters (R) answered questions about crime, police misconduct, money and more during Thursday’s candidate debate hosted by Jacksonville Today and the Jacksonville Bar Association. It was their first public debate since the August 23 election, when Waters got 47% of the vote to Burton’s 33%. Because no candidate got more than half ...
END_OF_DOCUMENT_TOKEN_TO_BE_REPLACED
Read More