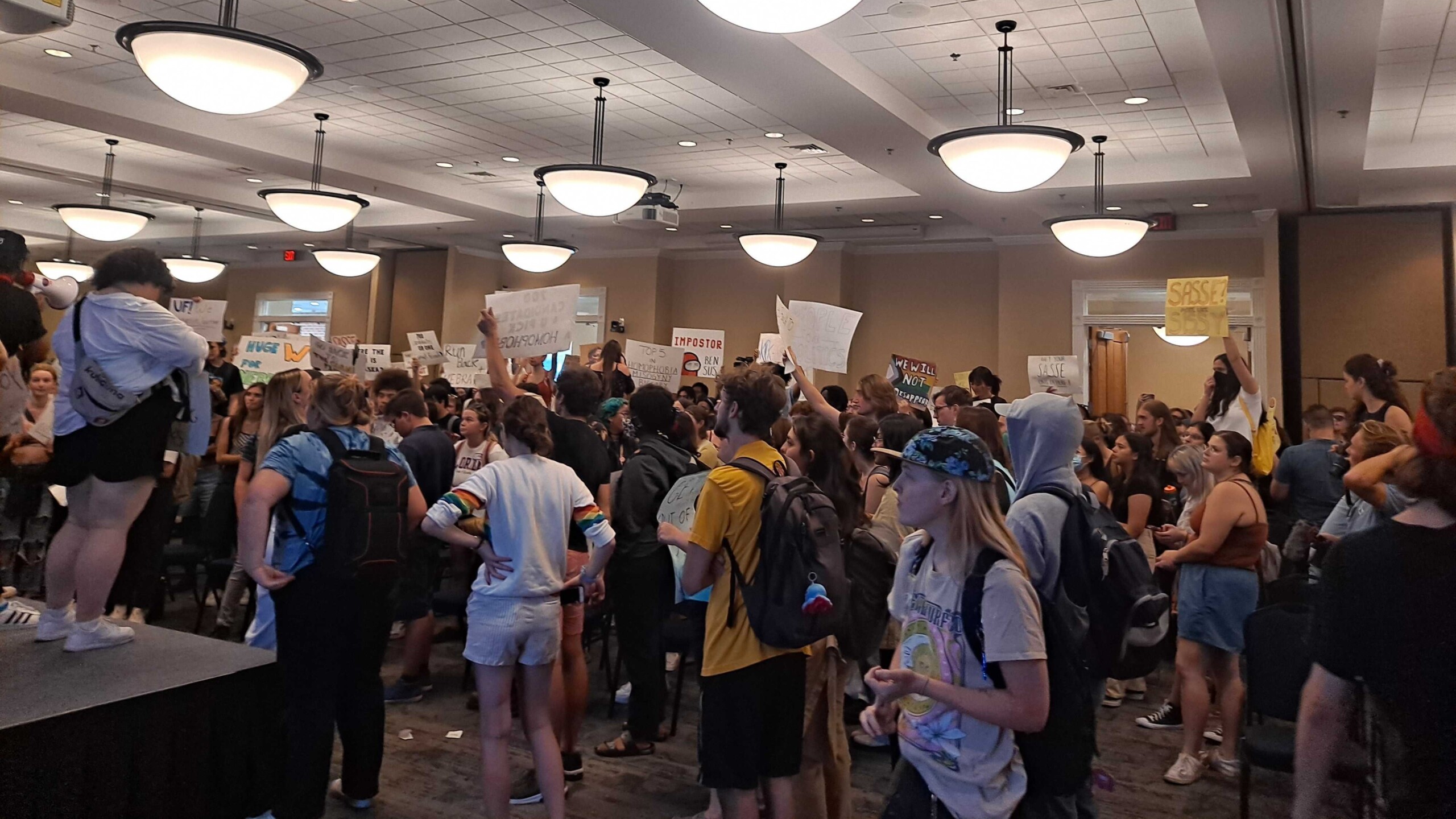 Hundreds of boisterous student protesters drove Sen. Ben Sasse from a stage Monday afternoon at the University of Florida, where he has been selected as the sole finalist to become the school’s next president.

Before he was interrupted, Sasse — a conservative Republican — defended his remarks opposing forgiveness of student loans, endorsed tenure reviews for faculty and praised hybrid college classes that include online components as especially effective.

He did not offer a clear answer responding to concerns that his appointment would further politicize the University of Florida. Sasse noted that he would be resigning from the Senate to take the job, and said the prospect of stepping back from politics is appealing.

The campus visit by Sasse, elected twice to the U.S. Senate in Nebraska since 2015, came just days after the unexpected announcement last week by the university’s board of trustees that Sasse was the only finalist to replace the school’s outgoing president, Kent Fuchs.

Early reactions to Sasse’s pending appointment as UF’s president-select were mixed last week among students and faculty on the campus in one of Florida’s most progressive cities. Chief among concerns were Sasse’s past statements and positions in opposition to gay marriage.

Halfway through Sasse’s hour-long session with students inside Emerson Hall, a group of about 250 protestors, some communicating information over handheld radios, entered the building. Sasse was escorted off-stage as chanting protestors with signs took control of the room. No one immediately appeared to have been arrested.

Sasse had acknowledged the protesters — whose shouts were audible from the room — before they barged inside, saying he respected their First Amendment rights to express their concerns even if he disagreed with them. Some shouted profane slogans about Sasse. Another carried a sign that said, “Keep your Sasse out of our swamp.” At one point, with the din rising outside, Sasse praised the group for chanting rhythmically so effectively.

Sasse’s planned third session with university employees was replaced with a livestreamed discussion moderated by Rahul Patel, a university trustee and chair of the search committee.

The selection follows years of political storms under Gov. Ron DeSantis and dominant conservatives in the Legislature that have swirled over the flagship university, even as the governor’s administration has increased the university’s funding and allowed it to hire more professors. Education – even higher education – has become one of the front lines for conservatives in the culture wars ahead of November’s elections.

The political disputes have covered whether professors can testify in lawsuits against DeSantis, limits on how professors can talk in classrooms about racism in America, surveys of professors and students about their political beliefs, tenure reviews for professors, and whether UF — which recorded more COVID-19 cases than any other university in the U.S. — should have required vaccinations or masks in classrooms (it never did). The school also hired as a medical professor the governor’s controversial pick to become surgeon general, Dr. Joseph Ladapo, and pays him $337,000 on top of his state salary. 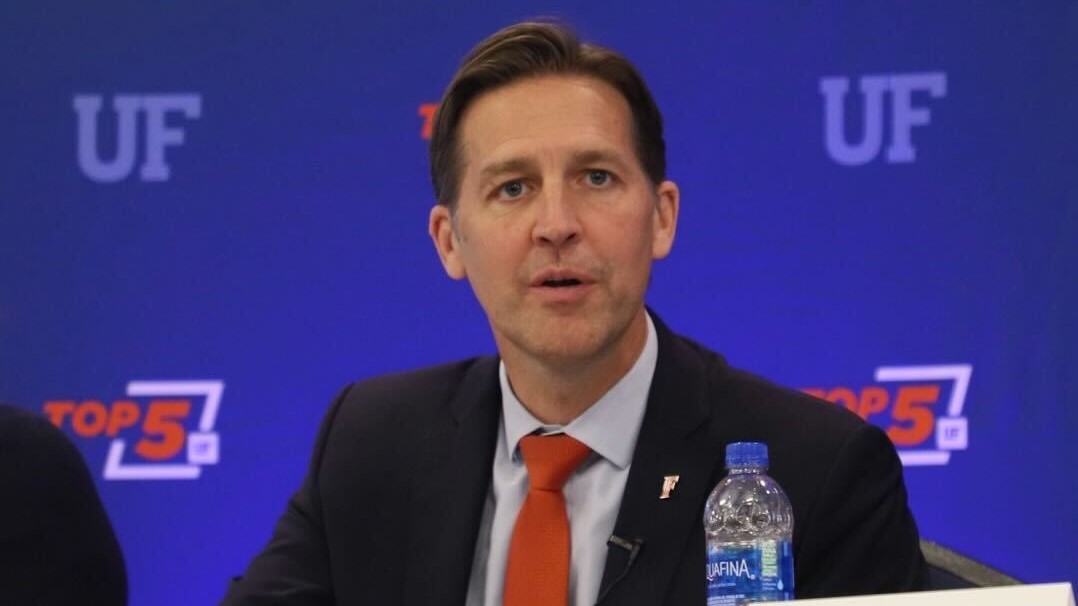 Sasse is aligned on many political issues with DeSantis, including support for restrictions on abortions and opposing student-loan forgiveness. Sasse also condemned the 2015 Supreme Court ruling requiring states to recognize same-sex marriages. UF has a vocal LGBTQ community, and that has been the source of some of the earliest criticisms against Sasse on campus.

Sasse sought Monday to allay those concerns, telling the audience he values both diversity and the LGBTQ community.

“I believe deeply in the immeasurable worth and universal dignity of every single person, and I believe in creating a culture and community of inclusivity,” he said.

Like DeSantis, Sasse has a tense relationship with former President Donald Trump. Sasse was among seven GOP senators to vote to impeach Trump on a charge of inciting an insurrection at the Capitol. He also has accused Trump of lying that he won the 2020 election, bungling the response to the pandemic and cozying up to dictators and white supremacists. Trump’s endorsement in 2018 helped propel DeSantis into the governor’s mansion, but their relationship has turned cold and the two may face off in the 2024 Republican presidential nomination.

Trump, who now lives in Florida, wrote last week that he was glad to see Sasse resigning from the Senate and said the University of Florida will regret hiring him as president.

On the Senate’s intelligence committee, Sasse has sharply criticized China for exploiting its academic partnerships to commit espionage. DeSantis and Florida lawmakers have been similarly critical. It was unclear how or whether that might affect UF’s international research.

The search for a new university president took place over about seven months in near total secrecy, under a new Florida law that allowed the school to withhold the names and information about potential candidates until the final stages of the process when finalists emerged.

The 15-member committee that chose Sasse said it interviewed more than 700 candidates and only Sasse – former president of 1,600-student Midland University in his hometown of Fremont, Nebraska – was its unanimous recommendation. UF has roughly 52,000 students on its main campus in Gainesville and facilities in all 67 counties across Florida.

The search committee included one student, three professors and the dean of the law school. The others included four trustees, three graduates, an athletics representative, a member of the state board of governors and a former aide to President Bill Clinton who now works with the university’s fundraising arm.

Fuchs was UF’s president during the school’s ascension to a Top 5 ranked public university, but his leadership was questioned over his reluctance to challenge DeSantis. The influential trade publication Chronicle of Higher Education last year described Fuchs as the Gator “who won’t bite.”

Fuchs announced in January that he will remain president through the fall semester and until his successor is appointed, then will return to conducting research and teaching electrical and computer engineering at Florida after a sabbatical.

This story was produced by Fresh Take Florida, a news service of the University of Florida College of Journalism and Communications. The reporter can be reached at ebarrera@freshtakeflorida.com. You can donate to support the students here. 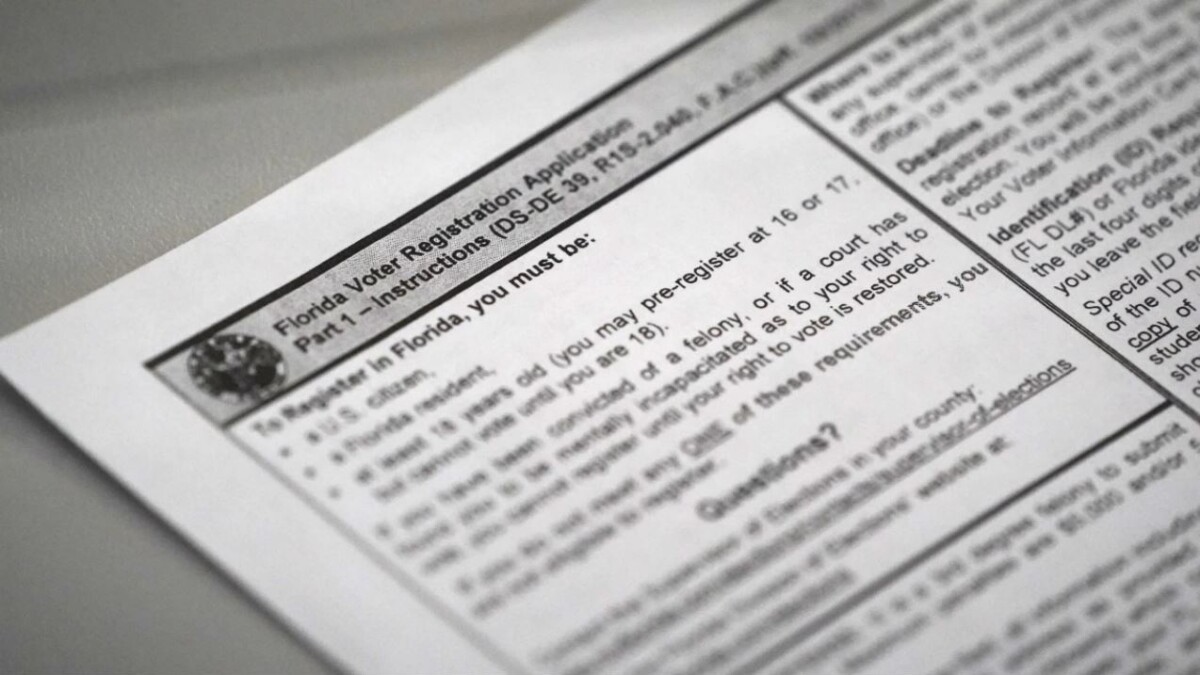 Happening Now Want to vote? Tuesday is the deadline to register

New voters have until Tuesday to register to vote in the Nov. 8 midterm election, which includes races for Congress, governor, other statewide offices, state Legislature, judges and others. Duval County residents also will elect a sheriff. Here’s what you should know about registering to vote: How can I check whether I’m registered? Go to the Florida Department of State ...
END_OF_DOCUMENT_TOKEN_TO_BE_REPLACED
Read More