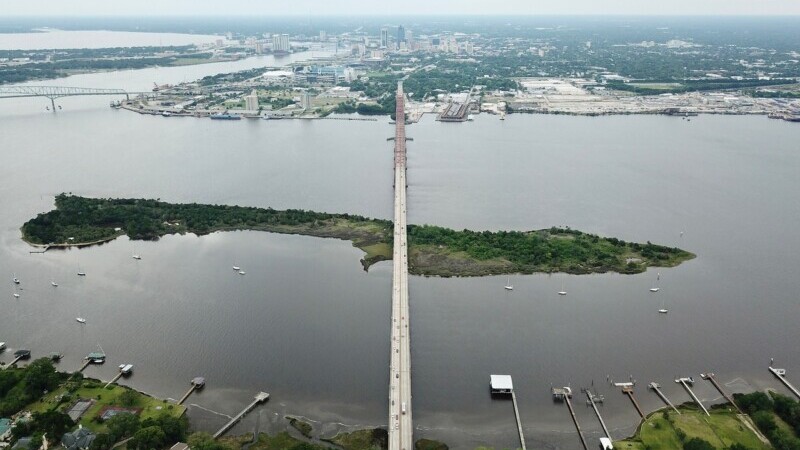 Although it hasn’t always been accessible or maintained, Exchange Club Island is an official city park and one of Jacksonville’s unique urban spaces. Here’s a dive into the colorful history of the accidental island beneath the Mathews Bridge.

More than 50,000 people drive over one of Jacksonville’s most singular parks every day without ever realizing it. Officially named Exchange Club Island — more on that in a minute — the island beneath the Mathews Bridge is an official city park that can only be reached by boat.

The island is not a natural feature of the river. It only formed around 1940 from river muck raised up when the Army Corps of Engineers dredged an auxiliary shipping channel alongside Commodores Point to allow access to Downtown Jacksonville by larger ships. The corps pumped sediment across the river to what was then a wide bay, ultimately forming a dredge-spoil island that today covers 34 acres and is more than half-mile long.

The new island across from Commodores Point saw no immediate human use, leaving Florida’s famously adaptable flora and fauna to take over. Almost immediately, the accidental island became a verdant paradise full of rabbits, snakes, birds, lizards and wildcats near Jacksonville’s busy docks. The island was just one of several new or seriously altered features that cropped up on the St. Johns River in the early 20th Century. Blount Island and Quarantine Island near the Dames Point Bridge were similarly formed from dredging projects.

Locals dubbed the place Mud Island after its origin. Others knew it as Snake Island or Rattlesnake Island, as it was said to have been swarming with serpents. The island’s reputation as a snake haven, which may have started as folk wisdom aimed at keeping curious visitors away, persists even today, although the snake population now doesn’t seem to be larger than any other wooded park. Still other locals knew the island as Rabbit Island after another animal commonly seen there. Today, some have proposed naming it Swan Island, after one Jaxson who made it his home: Capt. Augustus Swan.

Augustus Swan and the squatters of Mud Island

In 1941, Mud Island’s population increased to one. Augustus Swan, a retired mariner, came upon the uninhabited island, already green with scrub and vegetation, while cruising up the St. Johns River in search of a secluded place to dock his houseboat and settle down. He decided Mud Island would be the perfect spot. Though the island officially belonged to the federal government, Swan made it his home for eight years. Florida Times-Union photographer Grover Henley, who visited Swan and wrote an article about him in June 1945, called him the “sole inhabitant and ruler of the land.”
In 2016 Times-Union writer Matt Soergel dove deeper into Swan’s story. Originally from Cumberland Island, Georgia, Swan was a veteran sailor who had made seven voyages around the globe. Around 1910 he and his family came to the Jacksonville area, where Swan continued working in the maritime trade. Around the time of the death of his estranged wife Hattie in 1941, Swan, then aged 71 or 72, bought the houseboat that would become his island home.

On Mud Island, Swan lived the self-sufficient life of a pioneer. He caught fish from the deck of his houseboat, grew vegetables in his robust garden (tomatoes were his specialty), and raised chickens and rabbits. He enjoyed sharing his bounty with his family, who he regularly visited or hosted on the island. His sojourn on the island might have ended in 1944, when the Cuba-Florida Hurricane pushed his boat up on the shore, but the ever-resilient Swan simply built stairs so he could access his now permanent home.

Swan died in 1949 at the age of 82, having become one of the most colorful characters in Jacksonville history. He wasn’t the only person to stay on Mud Island; even during his time, the island saw use by a sand mining operation and by U.S. Navy personnel who used it as an ammo dump. News reports and the recollections of elder Jaxsons indicate that others also squatted on the island. According to these stories, fisherman R.H. Jones also made the island his home with his wife, a woman known to locals as Tugboat Annie.

An exotic urban park is born… and abandoned

Major change came to Mud Island — and the rest of Jacksonville — in 1951 with the construction of the Mathews Bridge, the eastern approach of which runs directly over the thin northern end of the island. When completed in 1953, the bridge enabled the rapid development of Arlington as a booming suburban bedroom community, transforming this part of Jacksonville. The bridge also made Mud Island visible to the thousands of drivers who crossed it each day.

In 1956, local businessmen announced a proposal to place large billboards on the island. City leaders found this both tacky and potentially dangerous, as it would encourage drivers to crane their necks to read the signs when they should be focusing on the road. At this time the island was under the control of the state of Florida, but following the billboard controversy, the state transferred the island to Duval County with the stipulation that it be used as a public park.

In 1956, local civic group the Exchange Club offered to help transform Mud Island into a park. Over the next few years, the club added a clubhouse building, picnic areas, bathrooms and small harbors for boats. The new park had its grand opening on July 4th, 1960, with visitors’ crossing to the island from Arlington on a temporary pontoon bridge installed for the occasion. A marble marker dedicated to the Exchange Club was erected, and the island was officially named Exchange Club Island after its benefactors.

For a brief time, Exchange Club Island was an idyllic space. Unfortunately, the new park was beset by vandals and looters, who damaged the buildings, stole the barbecue grills and left heaps of beer cans and trash. Even the marble marker was riddled with bullet holes and graffiti. The city cleaned up the park several times, but by 1972 the parks department had had enough. They called it quits on the park, capping the artesian well and leaving the island to nature.

Exchange Club Island still saw use by adventurous boaters and campers, but it was largely left abandoned. Locals dreamed of restoring it, while developers pitched new uses for the land involving everything from a housing development, a sailing school, a hippie commune and even a particularly hazard-ridden golf course. All of these ultimately fizzled out, and the island sat mostly unused for more than 40 years.

Finally in 2014, the city of Jacksonville decided to restore Exchange Club Island as an actively maintained park. The city added nature trails, a floating dock for boats, a kayak launch, pavilions and picnic areas. Work continued for the next three years until the park officially reopened in 2017, restoring one of Jacksonville’s most singular attractions. Today, Jaxsons and visitors can reach the island via boat (the nearest launch is the Arlington Public Boat Ramp) and once again enjoy the serenity of a wild island just half a mile from Downtown. 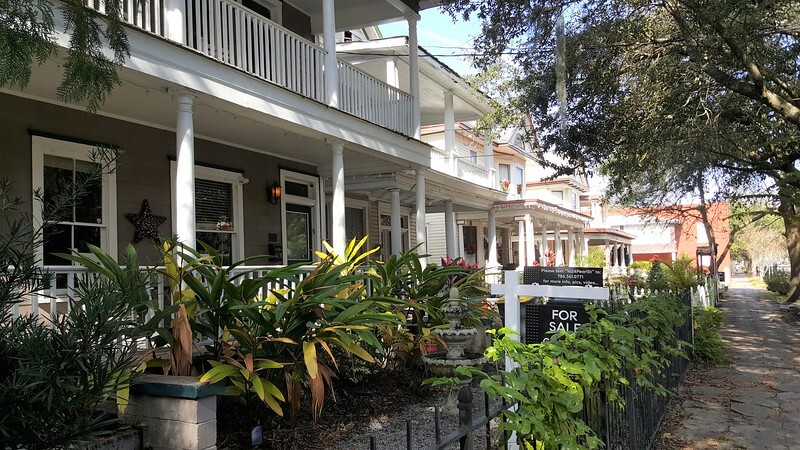 The Jaxson THE JAXSON | The 7 historic districts of Jacksonville