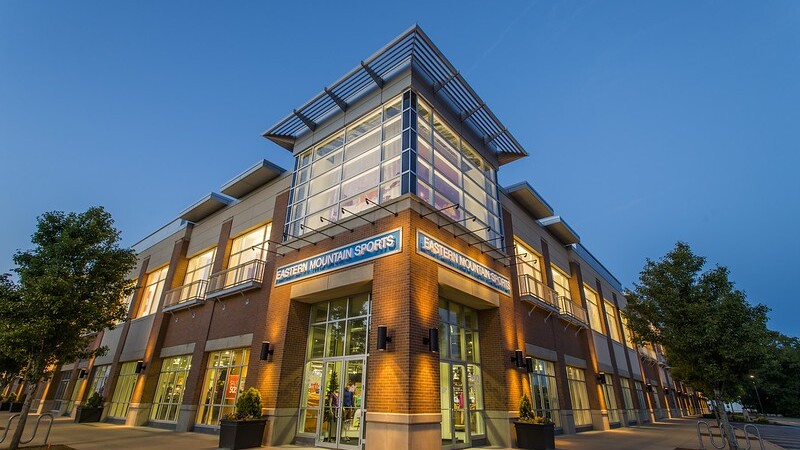 The Shops at 300 Needham Street/EZ Storage development in Newton, Massachusetts, are an example of a mixed-use storage center. | Avison Young.

Developers want to lift a ban on self-storage facilities in Downtown Jacksonville, but building such facilities haphazardly across the city center could stifle key streets and create more dead space in an area already plagued by it. City leaders should maintain the ban – and create a true master plan to give Jacksonville the vibrant Downtown it deserves.

The Jacksonville City Council is debating a proposed change to the Downtown zoning overlay that would allow for the construction of more self-storage facilities. The overlay, which Council approved unanimously in 2019, restricts construction of self-storage units in much of Downtown. The change has been requested by The Simpson Group, an Atlanta-based developer that is currently under contract to purchase a site on the corner of Prudential Drive and Hendricks Avenue in the Downtown Southbank, where they hope to build a storage center.

Supporters of the bill say that with residential development on the rise in Downtown Jacksonville, it’s necessary to add more self-storage to serve the people moving in. However, residents of the Southbank and adjacent San Marco have voiced strong opposition to the bill. There’s good reason: Not only would this particular site create a mostly dead space on one of the busiest corners in the Southbank, the change to the overlay would have wide-reaching effects across Downtown. Such a change should not be taken lightly, least of all for the benefit of a single developer. As LeAnna Cumber, the councilwoman representing the Southbank and San Marco, told the Jacksonville Daily Record, “We don’t have a plan that we stick with, and we change what people are trying to do on the whim of one developer.”

Council referred the bill back to the Land Use and Zoning (LUZ) Committee for further review, and debate is bound to continue. In the meantime, it’s worth taking a deeper dive into the issues of the bill and of self-storage facilities in urban areas generally.

A waste of time and energy

There is absolutely no reason to change the Downtown overlay to allow more self-storage, as there are already plenty of areas in and immediately surrounding Downtown where these facilities are allowed. According to the Downtown overlay, self-storage facilities that are a part of a mixed-use building with ground-floor activation are already permissible by exception in Downtown’s Brooklyn, LaVilla and Church (north of James Weldon Johnson Park) districts. There are storage facilities in these areas already — and because they were completed before the overlay was adopted in 2019, none of them have ground-floor activation. More could easily be built there so long as they follow the city’s reasonable requirements.

In addition, according to sections 656.313 of the city’s Code of Ordinances, self-storage facilities are allowed in various community/general commercial and industrial use categories and zoning districts. In other words, self-storage facilities that don’t require a mix of uses or ground-floor retail are already permissible in adjacent urban districts including Talleyrand, the Rail Yard District, Mixon Town, San Marco’s Kings Avenue and the Historic Eastside. As such, the attempt to change the entire overlay to the benefit of one developer is a waste of time for everyone involved.

Not all self-storage facilities are inherently bad for walkability and urban vibrancy, but traditional designs are notorious for creating dead space. We’ve written before about Jacksonville’s problem with vibrancy-killing parking craters, but empty lots aren’t the only things that can negatively affect a neighborhood’s walkability. By creating a vast, blank wall with no chance of generating activity, traditional self-storage facilities contribute to the same problem. Arguably, they’re worse than an empty lot, as they’re more or less permanent fixtures. They also employ relatively few people and thus add little to local foot traffic. While there are ways to mitigate the impact of self-storage facilities (more on that in a minute), Jacksonville’s leadership needs to do what it can to prevent more dead space in Downtown, stat.

A look at some of Downtown’s existing self-storage facilities provides a good case study for why Council shouldn’t change the current overlay. The U-Haul self-storage at 400 W. Ashley St. in the Northbank created a dead space that, between the former office building and truck parking, spans an entire block right in the middle of an area that’s otherwise seeing a burgeoning renaissance of new development. In Brooklyn, the Cubesmart facility on Park Street and the Extra Space Storage building on Myrtle Avenue both create swaths of dead space on streets that are prime candidates to be redeveloped with pedestrian-oriented retail and amenities.

If anything, there’s too much leeway for developers to build self-storage, and they should be further restricted in areas where it’s currently allowed, not expanded into even more places. And given that keeping self-storage out of Downtown might tempt developers to build in surrounding urban districts like the Eastside’s A. Philip Randolph Boulevard and San Marco’s Kings Avenue, the zoning code should be beefed up there to require higher-quality facilities with ground-floor activation.

Council should just axe The Simpson Group’s request to alter the Downtown overlay. Self-storage can already be built in plenty of areas Downtown, if not the specific high-profile intersection that the developers are currently eyeing. Instead of attempting to gut a perfectly sensible overlay, it’s time for The Simpson Group to simply find another site where their desired use is already permissible.

From there, Council and the Downtown Investment Authority should rework the city code to encourage the type of development that will finally move Downtown forward. As we’ve argued for years, it’s time for the city to draft a comprehensive, strategic, publicly vetted master plan to guide Downtown development. Part of this plan should be the designation of primary retail-oriented streets where highly active uses are clustered and passive uses like self-storage would absolutely not be allowed. In conjunction with this, the master plan should designate service-oriented secondary streets and industrial areas where self-storage may well be an acceptable use. Finally, for any self-storage to even be considered in Downtown (or any other urban neighborhood), developers should come out of the gate with mitigating features such as ground-floor retail and limited entry points for cars.

Jacksonville doesn’t have any examples of such higher-quality storage facilities, but they’re allowed by exception in parts of Downtown, and common in other cities. The My Neighborhood Storage Center on Colonial Drive in Downtown Orlando mitigates the tendency of storage facilities to create dead space by including 12,000 square feet of retail below a 92,000-square-foot storage center. Similarly, in Newton, Massachusetts, in the Boston area, the Shops at 300 Needham St. contain 31,000 square feet of retail on the ground floor below a 190,000-square-foot EZ Storage facility. Other cities have taken a different route and kept storage out of higher-activity areas. In Charleston, South Carolina, the city tightened its standards in 2017 by not allowing self-storage facilities to be constructed within 200 feet of mixed-use residential districts.

The city needs to overhaul the entire Downtown zoning overlay and approach self-storage, retail and a lot of other uses from a completely different perspective. Jaxsons want a vibrant Downtown, and it’s the City Council’s job to make it happen. It’s time that city leaders start demanding better for our citizens and cut off bad policy decisions like this at the root.