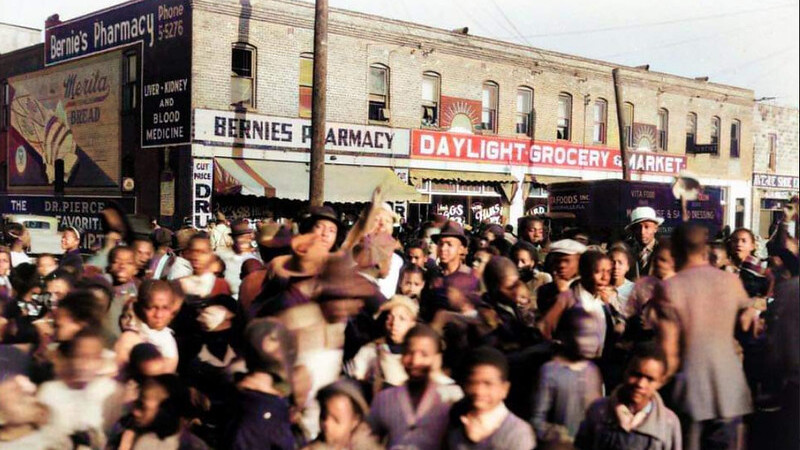 As Jacksonville celebrates its 200th birthday this week, here are five moments that made the city what it is today:

Though part of Confederate Florida, Jacksonville was a hotbed of Unionist sentiment throughout the Civil War,

Many prominent citizens and virtually all Black Americans supported the Union effort. Union forces occupied Jacksonville four times through the war, and held the city permanently after February 1864. Blacks in particular played a major role in the Union war effort. Thousands of enslaved people escaped to freedom behind Union lines in Jacksonville as well as U.S.-held St. Augustine and Fernandina. Each escape weakened the Confederates, and thousands of freed enslaved joined the fight as members of the U.S. Army and Navy.

Following the war, thousands of Black U.S. troops settled in and around Jacksonville, establishing historic Gullah Geechee neighborhoods like Brooklyn, Hanson Town and Oakland (the modern Eastside). Thanks to the protection of current and former Union soldiers, Jacksonville emerged as a comparatively safe place for African Americans to settle. This reputation remained intact for several decades, and Jacksonville saw the rise of a large, vibrant and politically involved Black community. Over the next decades, Jacksonville transformed from a small town into a thriving, rapidly growing city.

The Reconstruction era ended in 1877, ending much in the way of formal federal protection and services for freedmen and women. As ex-Confederates and their sympathizers returned to power, the state of Florida passed increasingly repressive Jim Crow laws aimed at curtailing the rights and progress of African Americans. However, in Jacksonville, the Black community had gained enough power and political influence that the city fended off Jim Crow for another decade.

In 1887, Jacksonville annexed several surrounding communities, like LaVilla and Springfield. This made Jacksonville a Black-majority city just as the white Democratic elite was working to introduce Jim Crow. In the local December 1887 elections, a coalition of Black and white Republicans and the labor movement dealt a major blow to the establishment in electing a historic progressive government. The coalition took 13 of the 18 City Council seats, including five Black election winners. African Americans were appointed to various high offices, including police commissioner, city marshal and municipal judge. Progressive white Republican Charles Bristol Smith served as mayor and led an ambitious campaign for reform.

The progressive government was derailed when Jacksonville was struck with the yellow fever epidemic of July 1888. Smith was out of town when the fever broke out and did not return. Eight City Council members fled, and two others died of the fever, leaving the city government unable to reach quorum. In response, some prominent citizens formed the Sanitary Association to take charge of the city’s core functions. Subsequently, the state government removed the entire City Council and replaced them with appointees who introduced a poll tax and other measures to disenfranchise Black citizens as well as many working-class whites. Home rule did not return until 1893, by which time the local elite and Jim Crow were firmly established. Not until the 1960s did Black residents again begin to see the level of representation they had won in 1887, the year Jacksonville stood firm against Jim Crow.

It was here on May 3rd, 1901, around noon, a spark from a small wood-burning stove would set ablaze Spanish moss laid out to dry at Cleaveland’s factory. Eight hours later, 146 city blocks, 2,368 buildings and seven lives had been lost, resulting in nearly 10,000 homeless Jaxsons. Known as the Great Fire of 1901, the fire was the largest metropolitan fire recorded in the American South, with a black plume of smoke being seen as far north as Raleigh, North Carolina. It was also the third-largest urban fire in American history behind the 1906 San Francisco Earthquake and Chicago Fire of 1871. While a major disaster, Jacksonville would never be the same again as the rebuilding effort transformed the city into Florida’s first city to surpass 100,000 residents.

In the years before the United States’ entry into World War II, the country built up its military resources in strategic parts of the country. In 1940, this led to the creation of one of the biggest naval air bases, on the outskirts of Jacksonville. Naval Air Station Jacksonville was followed in 1942 by a major sea base at the mouth of the St. Johns River, Naval Station Mayport, as well as several more installations around the region. During the war, the bases were hubs for the Navy’s women’s auxiliary, the WAVES, and the city’s shipyards and factories went to work building and supplying Navy vessels. By the end of the war in 1945, Jacksonville had emerged as one of the country’s biggest military hubs.

This U.S. Navy presence has shaped Jacksonville’s growth and identity ever since. NAS Jacksonville was the birthplace of the Blue Angels, the Navy’s famous demonstration squadron. The Navy has also transformed the city in other ways. During the 1940s, the U.S. Navy enlisted thousands of Filipinos, offering them a pathway to American citizenship. As one of the major Navy centers, Jacksonville saw a considerable influx of Filipino sailors and their families. Today, Jacksonville’s Filipino population numbers around 25,000, the largest Filipino community in Florida and one of the largest anywhere in the Southeast.

Like most North American cities, Jacksonville faced a transformative crisis in the 1950s and ’60s. Mass suburbanization and white flight led thousands of families to move outside the city limits to new residential developments, leaving the city with a diminishing tax base at a time investment was badly needed in the old city neighborhoods. Ultimately, the urban core lost more than 100,000 people, half of its population. Local leaders, headed by Mayor Hans Tanzler and supported by a wide array of citizens, both urban and suburban, Black and white, proposed a radical solution: consolidating the city of Jacksonville and Duval County governments into one. This would extend city resources to those in the unincorporated county while providing a badly needed source of tax funding for Jaxsons in the urban core. In 1967, voters approved consolidation by a margin of more than 60%, and it was implemented the following year.

Consolidation has changed Jacksonville in a variety of ways. Because of the vast size of Duval County, Jacksonville became the largest city by landmass in the contiguous United States, as well as the largest city in Florida by population. Bragging rights aside, it also saved the old city from insolvency in a more equitable, efficient and effective manner than the solutions in other cities like Orlando, Tampa and Miami. Although its benefits haven’t been capitalized on consistently, when used properly, consolidation allows the city to tap the resources of a county nearly 1 million strong to bolster its urban core and distressed neighborhoods.

The Jaxson Opinion: Between the cheerleaders and cynics

The Jaxson team is often accused of being cheerleaders for Jacksonville who don’t do enough to acknowledge our city’s problems. Conversely, we’re also frequently accused of being cynics who don’t do anything but focus on our city’s problems. From our perspective, where we really fall is in the pragmatic in-between: We celebrate the things that work and critique the things ...
END_OF_DOCUMENT_TOKEN_TO_BE_REPLACED
Read More