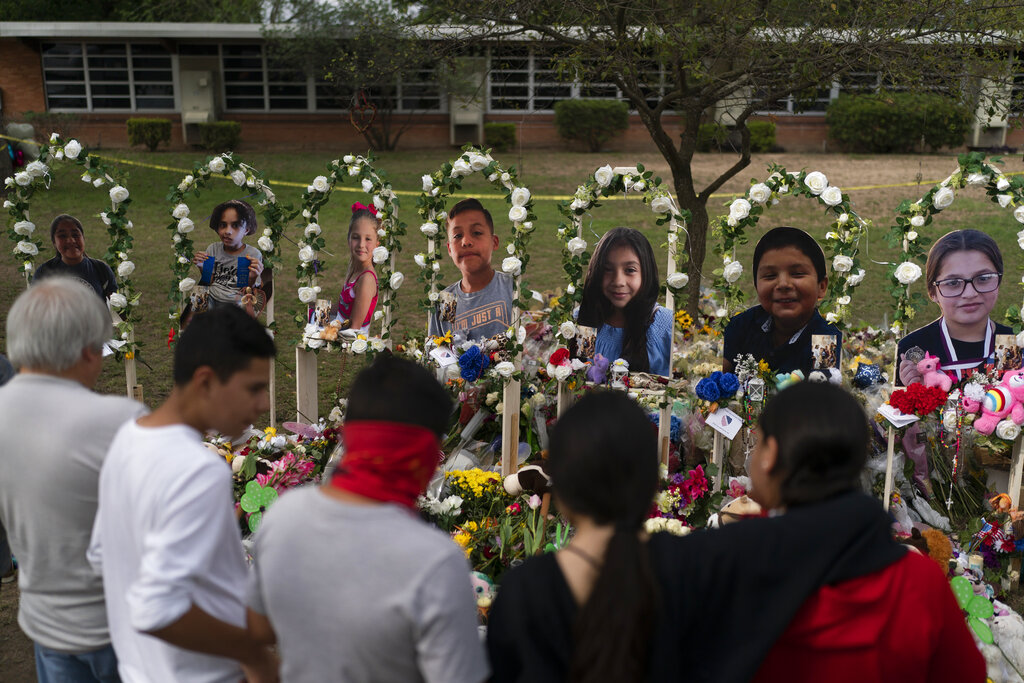 Gathering at a memorial at Robb Elementary School in Uvalde, Texas. | AP

Last week, I dropped off and picked up my son from school for the last time until the next school year begins. It’s a commonality I share with parents across the country. Another commonality we all share is the fear that grips us when we relinquish control over the safety of our children to educators and institutions we presume to be safe.

Unfortunately, children in America haven’t been safe for a long time.

I remember Columbine. I remember Virginia Tech. I remember Northern Illinois. I remember Sandy Hook. I remember Parkland. Yet for some reason, the massacre of 19 elementary school children in Uvalde, Texas, last week has set a sadness inside me no amount of breath work, movement, alignment, meditation, thoughts or prayers can unseat from my soul.

For 78 agonizing minutes parents gathered, begged and pleaded with responding officers to do something — to use their weapons and turn on their training to rescue their children. Their cries were ignored, and 19 children were left to be slaughtered because of inaction by those sworn to protect and serve.

This cowardice is unconscionable. The grief insurmountable. My empathy ineffable. Quite possibly because, for the first time, my own child is in elementary school and was enjoying his last week of school. Another state, another space, another time, and he could have been among the victims.

When my son began kindergarten in the fall of 2020, I was unsettled by how he was snatched from my car by a teacher and a safety patrol, ushered through the courtyard and into the building when I had not even set foot inside the school because of COVID precautions. On his first day in 2020, I couldn’t have picked out his teacher in a lineup if I’d wanted to. Eventually, I got to know his teacher — at least what she looked like.

In 2021, parents were welcomed back on campus for orientation and my concerns eased because I at least had an idea of where my son was throughout the day. Yet this is all a false sense of security and safety, because just like in Uvalde, an armed mad man can enter what you believe to be a safe zone and take from you the very being you gave life.

The district’s policy that came through last Tuesday evening, no longer allowing book bags for the remainder of the school year, along with the message about increased security, did not make me feel safe. I did not believe that my child would be safe. The precautionary measures only enhanced my anxiety and paranoia about what could happen just seven minutes from my front door.

Going to school in Chicago, from seventh grade through 12th grade, I passed through metal detectors before I was admitted to the building. During my time in high school, security measures increased from metal detectors and ID cards to hand wands, ID scanners and conveyor belts on which we placed our book bags to check for anything we were not supposed to have. This was in addition to the armed police officers who routinely walked our campus, the police car parked in our courtyard as a deterrent, and the fact that a police station and fire station were our neighbors.

When I tell people in Jacksonville this story, many feel sorry for me. They want to know how I felt going to school in such a carceral state. All I can do is shrug my shoulders. It was normal to me. School shootings are just as normal. Our demand for the most basic safety is abysmal.

What Uvalde and Parkland and Sandy Hook and all the other names suggest to us is that life is meaningless for many, much less than the perceived right to bear arms.

Texas Democratic gubernatorial candidate Beto O’Rourke was called a “sick son of a bitch” for wanting to discuss gun control, gun reform and gun safety during the press conference where Texas Gov. Greg Abbott and Sen. Ted Cruz were offering their thoughts and prayers.

If in the middle of a national tragedy due to guns is not the time to talk about safety, about prevention, about the preservation of life, when is?

The Republican Party line is “guns don’t kill people, people kill people.” Then I ask, where are their reforms to restrict the access of guns to people who don’t need them?

Who NEEDS a gun?

Expanded background checks, increasing age limits, a ban on assault rifles, closing the gun show loophole, all of these measures work to make the use and presence of guns in this country more safe. But in the richest nation in the world, a developed and innovative democracy with a highly capable military, why do average citizens need guns?

Right now, America’s most popular pastime is watching footage of the carnage that comes after a mass shooting or one-off homicide on a loop on network, cable, or streaming channels.

Imagine, how many children would still be here to hug their mothers, dap their fathers, wink at cute girls, smile at cute boys and make plans for their future if there were no guns.

Guns are easy. Co-existing and resolving differences is what’s difficult. Providing services to improve mental health, combat bullying, reducing the number of unhoused, and caring for the abused, addicted and afflicted is what’s difficult. Actually working outside of existing crime and punishment frameworks to improve quality of life so that there may be no more “gone too soons” is difficult.

We elected our leaders in the House and Senate to be courageous and to work for us, in our interest, and in the interest of our children. But instead, we’ve been condemned by their silence to continue dying from senseless gun violence because our lives don’t matter.

If they did, we’d hear more than just lukewarm and lackadaisical calls for gun control, gun reform and gun safety.

Why control what can be abolished?

The courageous call that will preserve life and lead to the end of the carceral state in which citizens of this country have constantly lived under for decades begins and ends with abolition.