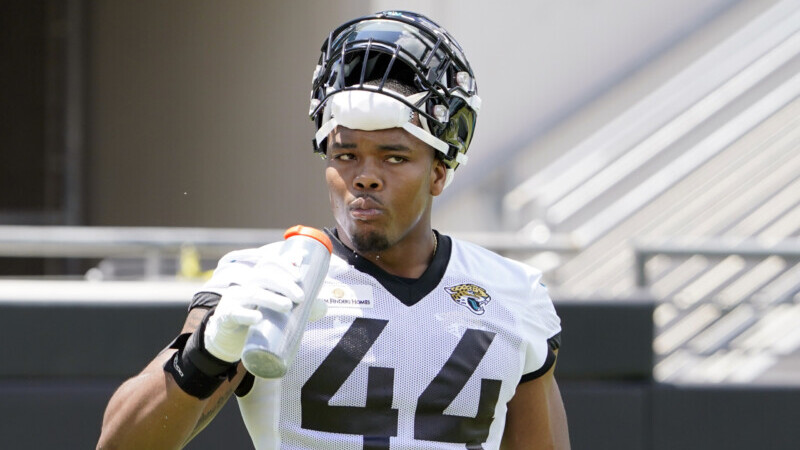 Jacksonville Jaguars outside linebacker Travon Walker (44) takes a break during rookie minicamp on May 13th. | AP

Of all the statistics showing how bad the Jaguars franchise has been in the 21st Century, perhaps one data point illustrates it the best.

The Jaguars have won their division one time since 1999. Once.

And in the NFL, it pays to win your division if you want to win it all.

Since 2011, only one team, Tom Brady’s 2020 Tampa Bay Buccaneers, have won the Super Bowl without winning their division. And to do it, the Bucs had to win three straight road playoff games, against the best regular-season teams, to make the big game.

So if you are looking for the root of the Jags’ futility for the last 20 years, start with their dismal performance in the AFC South, which they share with the Tennessee Titans, Indianapolis Colts and Houston Texans.

If Jacksonville is going to take advantage of having a generational talent (Trevor Lawrence) at the most important position in sports (NFL quarterback), it needs to start by winning its division.

The Jags surprised everyone when they used three of their first four draft picks on linebackers in this year’s draft. However, when you look at the rest of the AFC South, the approach starts to make sense.

The two best running backs in the NFL, Derrick Henry and Jonathan Taylor, play for the two best teams in the division, the Titans and the Colts, respectively.

To win the division, the Jaguars have to beat the Titans and the Colts (they play them both twice), and to beat them, they have to stop the run.

While Jax’s interior defensive line was serviceable in 2021, the linebackers were consistently out of position and a step slow. Teams held onto the ball for long stretches by exploiting this weakness, sucking the life out of the Jaguar team and its fans. The San Francisco 49ers possessed the ball in one game for almost the entire first quarter, the longest sustained drive in the NFL since 2000.

If the Jags had failed to significantly improve their linebacker play this year by acquiring new talent, they would get steamrolled in their division this fall.

So they drafted Travon Walker (first overall pick), Devin Lloyd (Round 1) and Chad Muma (Round 3), and signed free agent Foyesade Oluokun from the Falcons for big money. That is a stunning investment of draft capital and money in the linebacking corps. There is no doubt that Jacksonville now has as much raw athletic ability and talent as any team. But will it translate into performance?

While most of the NFL will be focused on the continuing development of Trevor Lawrence, and rightfully so, it will be equally important to watch the other side of the ball.

In particular, watch the second line of the defense closely. If you see the Titans and the Colts and other teams breaking big runs in the secondary for big yardage, the entire offseason approach will be a failure.

And the Jags certainly won’t win a second division title since 1999.