Opinion: Pro-birth is not the same as pro-life 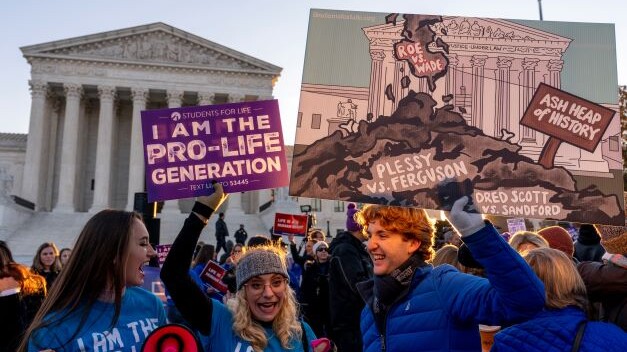 This body carried two children. My son to 41 weeks and one day. My daughter to 40 weeks and a day.

As a teen, I struggled with body dysmorphia and bulimia. As an adult, I gained 30 pounds carrying my son. I lost 20 of them after his birth. I gained 35 to 40 pounds carrying my daughter. So far, I’ve lost 15 to 20. My body looks nothing like it used to. It feels nothing like it used to. It is sustaining life because I’m still nursing my daughter, but that also means I can’t wear anything other than a T-shirt. The teenager I was and the adult I am struggle when we look in the mirror.

These are the superficial sacrifices of motherhood. We haven’t touched on the physical changes you can’t see that may need to be surgically removed. Then there’s the depression and anxiety I struggled with until February of this year after the birth of my daughter in June.

Knowing what I know now about the requirements, the sacrifices of pregnancy, birth and motherhood (some of which I touched upon in this 2018 TED Talk) — and the fact that I could have died at each step along the way — I would do it all over again. I would make the same decisions to bring my babies into being.

But I will not do it again. Never again.

During a Women in Literature course in college, I remember an instructor’s telling me that the “my body, my choice” mantra used by pro-choice activists was not a compelling argument. She said it could not compare to the arguments made by those who called themselves pro-life. Who doesn’t empathize with fathers wanting to have a choice in whether their child lives or dies? Who doesn’t empathize with wanting to save the lives of cherubic Black babies whose hearts start beating as soon as 18 days after conception?

You bleeding hearts may certainly be pro-birth, but you are not pro-life.

The United States has the worst maternal mortality rate among developed nations. Seven hundred women die every year from pregnancy complications. There is no universal health care to guarantee birthing people and their children receive the care they need to sustain their life. There is no federally mandated parental leave in this country. There is no universal pre-kindergarten or even subsidized daycare which at some facilities costs more than college.

But even if these social safety nets were in place in the United States, the government of this country or its individual states do not have the right to force half the population to have babies. And for the record, adoption is not a viable argument. This debate is not about whether people want to parent. It’s about whether they want to give birth. And as Family Support Services well knows, there are plenty of children languishing in the system because some who thought they could parent found out they in fact could not.

We, the people, deserve better social policies and access to abortion services. Forced birth is no better than the forced sterilization Black and brown women have been continuously subjected to in this country (see what’s happening at the border for a current example).

The ire over the coming revocation of Roe v. Wade is not only about abortion, or choice, or life. It is about justice. Without Roe, the fate and future of a birthing person will be inextricably tied to their womb, the potential of their earnings and standard of living cross checked against future conception.

I was as adamant about having my two children as I am about not having any more. I know well what it’s cost me physically, mentally, financially and more. I will never be on the side of those who feel good about forcing people to give birth.

Being pro-birth costs nothing. It is as politically advantageous as it is socially ambiguous. You’re not solving a problem, you’re not trying to improve the conditions and living standards of our most impoverished, marginalized or vulnerable people. You’re giving rights to something that is basically a parasite until the umbilical cord is cut.

How would I feel if my mother aborted me?

I wouldn’t feel a thing because I wouldn’t be here to answer the question. But I am here. And I do feel. I feel immense gratitude to mother my children while I hold space for those who choose differently. Who want differently.

Their choices, their lives matter too. Not everyone wants to be subsumed by motherhood and have to eat their way out of that identity to find themselves again. To find their lives again.

Being pro-birth makes for great propaganda. It makes for great talking points. But it is not justice for the unborn, it is enslavement for the living. And that’s hardly pro-life.