Capturing the magic of Black motherhood despite the maternal mortality crisis 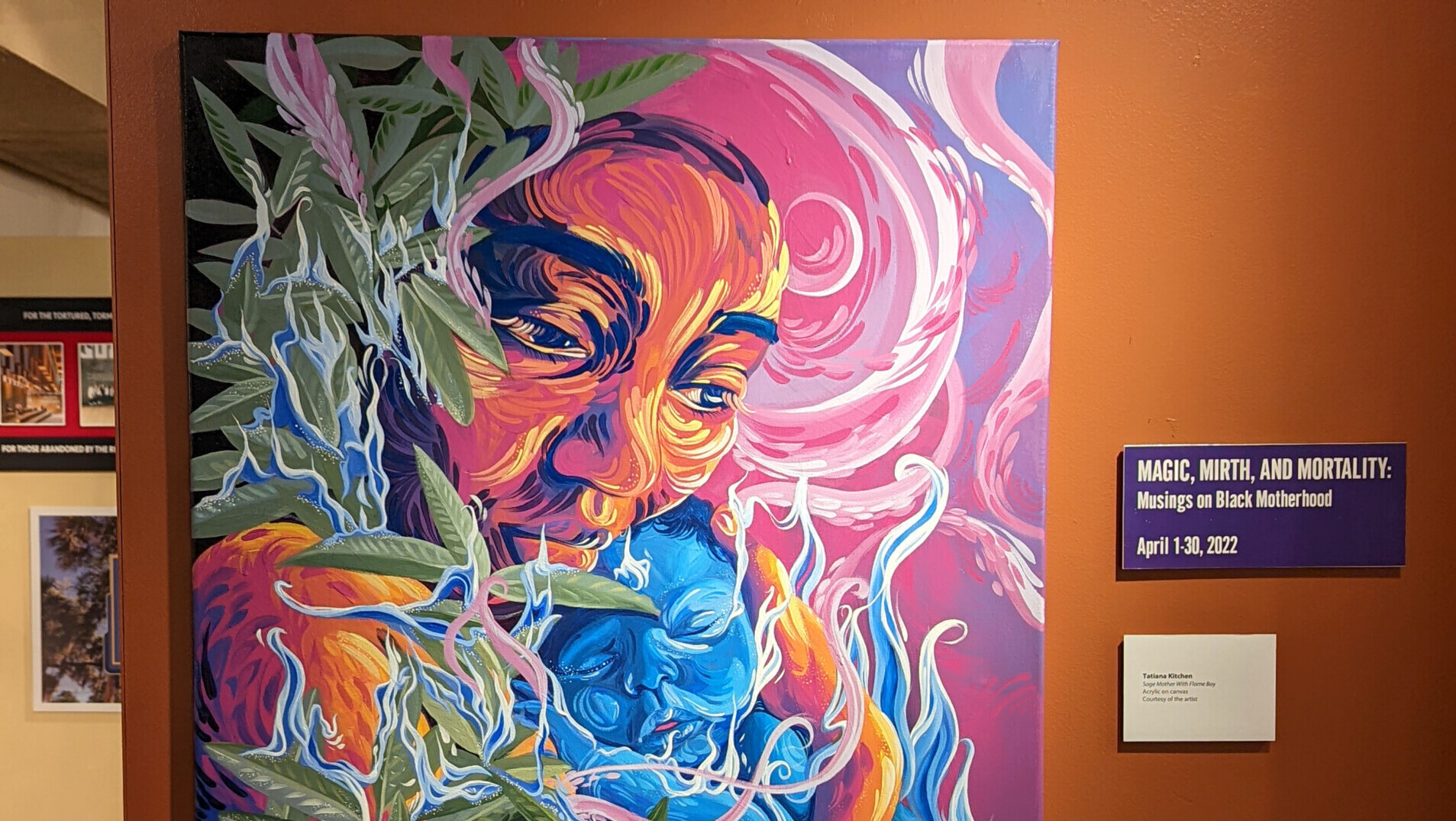 It’s one thing to know something. It’s an entirely different experience to be immersed in your knowledge, feel it with your heart, and see it reflected back at you. That is exactly how local curator, writer, wife and mother Shawanna Brooks wants you to feel when you experience her visual and literary art exhibition, Magic, Mirth, & Mortality: Musings on Black Motherhood, an exhibition inspired by and in tribute to the country’s Black maternal health crisis.

The first iteration of the show opened on March 7, 2020 at the Yellow House Art Gallery in Riverside — four days before the World Health Organization declared the COVID-19 global pandemic and all programming was halted. In the summer of 2020, Yellow House Director Hope McMath allowed small groups into her intimate space to view the exhibit she and Shawanna had conceived together.

Now the magic is back at three locations in St. Augustine: the Lincolnville Museum and Cultural Center, the St. Augustine Historical Society, and Flagler College’s Crisp-Ellert Art Museum.

The multi-institutional exhibition features works by Jacksonville visual artists Marsha Hatcher and Tatiana Kitchen as well as the photographs of Cheryl McCain. These works hold space side by side with Brooks’ musings from her pregnancy experience, which originally appeared as lengthy Facebook posts about her journey to motherhood. She had suffered two losses before, delivering children who did not survive at 23 and 24 weeks. During her third pregnancy she documented all of her angst leading up to the eventual delivery of her miracle baby, Roosevelt, who was born prematurely. In sharing her truth, Brooks connected with women who saw themselves in her story.

“It got me thinking about making it into a book,” Brooks said. “But the curator in me really saw it like . . . Why couldn’t this be an exhibition?”

As she considered whose work she wanted to personify her writings, her mind immediately went to Marsha Hatcher, who’s been painting mother and child for years.

Hatcher created three new pieces for this exhibition. She says she connected to the theme because as a Black mother she knows the realities of what she, her children, and grandchildren face all too well.

“We’re tasked with the job of giving them life and keeping them going as well as keeping them alive,” Hatcher said. “As much energy as you put into getting them here, they can be gone . . . especially in the society we live in today.”

Tatiana Kitchen wanted her images in the exhibition to reflect the theme of magic. To capture that feeling, she used a lot of texture in her paintings and swirl designs. But as much as her work embodies the energy, movement and magic of motherhood, she also shines a light on how mothers sometimes lose themselves to their children.

Kitchen says, “In the paintings I created, one of them was a mother holding her child and she was basically a personalization of a sage bush and she was on fire from the child. I just wanted to show in that painting how even though these children are . . . beautiful. It can still have its toll on the mother.”

At the heart of the exhibition is the humanity of Black mothers and Black children. That is what Cheryl McCain’s photographs exude.

“I wanted to speak to all of the issues,” McCain said. “Education, childbirth, the bonds between mother and daughter, and even the generations.”

McCain specifically wanted to address the breaking of generational curses. If there is one curse that passes between Black mother and Black daughter, it is that of the Black maternal care crisis. Black women are three to four times more likely than white women to die during childbirth. They are twice as likely to lose an infant to premature death. The United States’ maternal mortality rate ranks the highest among developed nations, at more than 26 deaths per 100,000 live births. The numbers have only escalated during the COVID-19 global pandemic.

This is the knowledge reflected back through the works by Brooks, Hatcher, McCain, and Kitchen. Visitors will be immersed in both the striking beauty of the paintings and photographs as well as Brooks’s own voice, which is captured reading some of her musings.

In this revival of the exhibition, all involved hope that once its residency in St. Augustine is complete it continues to travel nationwide and hopefully around the world informing people not only about Black maternal mortality but also the mirth — and let’s not forget the magic.

Tuesday, April 12 at 6 p.m.: Martha Bireda, Director of Blanchard House Museum of African History and Culture, will join curator Shawana Brooks and Lori Lee, associate professor of archeology and anthropology, in a discussion that will focus on Black maternal health through a historical lens. Attend at the Virginia Room of the Ringhaver Student Center at Flagler College, 50 Sevilla St. Watch the live stream here.

Saturday, April 23 at 6 p.m.: Shawana Brooks, Cheryl McCain, Marsha Hatcher, and Tatiana Kitchen will lead a panel discussion to discuss their work in relation to the exhibition, historical representations of motherhood in art, and issues around the representation of BIPOC women artists within the fields of visual and literary art. Attend at the Gamache-Koger Theater in the Ringhaver Student Center at Flagler College, 50 Sevilla St. Watch the live stream here.