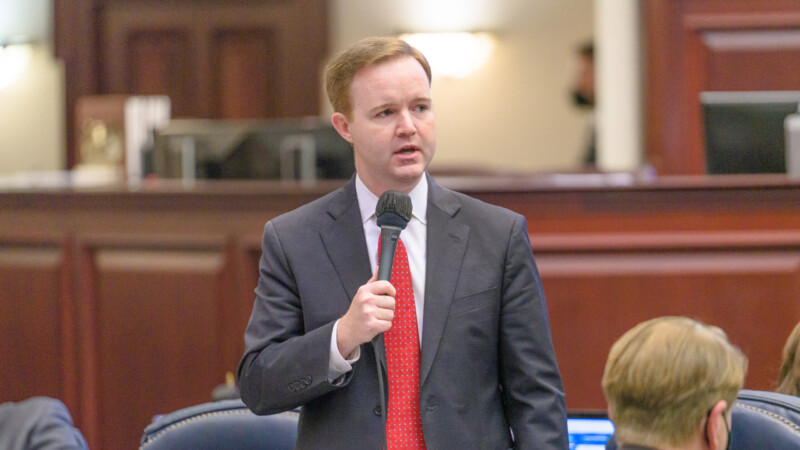 Clay Yarborough, a current state representative who thought the next campaign was all set. | Florida House of Representatives

Imagine you’re Clay Yarborough, a current state representative who thought the next campaign was all set.

A few months back, you basically were a shoo-in for state Senate. Your two opponents got out of the race to replace termed-out Aaron Bean after Senate leadership endorsed you.

One of those opponents, state Rep. Jason Fischer, had about a million bucks raised before he dropped out. The other one, state Rep. Cord Byrd, polled ahead of you in one internal survey people have talked up.

A win’s a win, and if you were Clay Yarborough, you were set for yet another victory, just like the two terms on City Council including the presidency, and just like the three terms in the House.

You were going to the Senate, because leadership wanted you there. And without the kind of nasty primary Tracie Davis and Reggie Gaffney are facing in the Duval Democratic district.

And then things got interesting. Or so the narrative goes.

Given an opportunity to back Gov. Ron DeSantis and vote against the Congressional reapportionment map that legislative leadership wanted, you went against him, voting for a map protecting a minority access district in North Florida, something that the governor is gunning to eliminate.

A couple of your colleagues went the other way. Specifically, those colleagues that Senate leadership buffaloed out of the race against you. See, they don’t owe leadership anything. Leadership picked against them already.

Imagine you’re Clay Yarborough. And you spent a big chunk of time after session so far looking in the rear view mirror.

The rumor at first was Jason Fischer would jump into the Senate race, and in doing so abandoning the dream of all politicians that is a term or two in the Duval County Property Appraiser office.

Fischer, a state legislator from Mandarin, has been atypical of candidates for that local constitutional office in his aggressive virtue signaling to show affinity with Gov. DeSantis. He tweeted this week, for example, in support of the Congressional map vision embraced by DeSantis. He also backs the ‘constitutional carry’ gun measure that could be part of the seemingly inevitable special session this summer.

There are those who say Fischer might want to run for Congress if the DeSantis map prevails and Duval, St. Johns, and Nassau are subdivided into two Republican-performing districts.

Meanwhile, the buzz of late is Cord Byrd jumping back in the Senate race, which would create an interesting predicament for Yarborough.

Byrd has carried Ron DeSantis’ water since 2018, and DeSantis showed his appreciation by picking Esther Byrd for the state Board of Education, in spite of/because of her rich history of incendiary rhetoric.

Some have said Byrd wants to be a judge. And that may be true. But DeSantis, the narrative suggests, wants his guy in the Senate seat. And Byrd is closer to that ideal than Yarborough.

Yarborough’s independence has been an issue throughout his political career, which is now well into its second decade. When he ran for House in 2016, the business community wanted Terrance Freeman over him.

And when Lenny Curry was elected Mayor, Yarborough applied for a gig in the Mayor’s Office, turning down a position in Mike Hogan’s Supervisor of Elections office to do so.

Susie Wiles, who was key to the transitional period, allegedly told Yarborough he should have taken that gig with Hogan at the time.

Could history repeat here? Ron DeSantis wants tribute. And Clay Yarborough is not that guy.

He could of course run for House one more time, perhaps from the new HD 16. Or he could run for a citywide office in 2023.

But if Ron DeSantis wants Cord Byrd, given the vast political capital the Governor commands, that’s what likely would happen. The governor isn’t interested in debate or dialogue. That’s why he’s trying to leverage the Senate to begin with, as a check against that chamber’s independence.

You may ask yourself why the governor is picking winners and losers in Senate primaries. That’s likely what Ralph Massullo, running for a House seat again after DeSantis endorsed Blaise Ingoglia over him for a Senate seat near Tampa, is asking. And that may be the question Clay Yarborough is posing right now.

None of the players — Byrd, Fischer, or Yarborough — are talking right now. At least not to me. But this Senate situation will be one to watch in the next week or two, to see what develops and how it ultimately affects the rest of the map.