THE JAXSON | Bronzeville: A revitalization example for Jacksonville 

Those hoping to revitalize Jacksonville’s historic Black neighborhoods should take a look at Chicago’s Bronzeville. Located in the South Side, Bronzeville rose to prominence as a national hub for blues music during the Great Migration. Today, the neighborhood is in the midst of revitalization while continuing to embrace its heritage and culture.

The revitalization of Chicago’s Bronzeville

South Side Chicago’s Bronzeville neighborhood became a well known “Great Migration” destination between the 1920s and 1950s. It’s believed the Great Migration can be traced to a poem, “Bound for the Promised Land,” which was published by the Chicago Defender in 1916. The poem was written by Matthew Ward, who lived in Jacksonville’s historic Eastside neighborhood. Largely as a result of Ward’s poem, from 1916 to 1970, it is estimated that more than 6 million Black Southerners relocated to urban areas in the North and West.

The Bronzeville name was suggested by James Gentry, a theater editor for the Chicago Bee, and was popularized by the Chicago Defender. Gentry said that African Americans’ skin color was closer to bronze than black. Due to a combination of white flight and Black Southerners pouring into the area, the neighborhood was home to a quarter million African Americans by the 1930s. During the height of segregation, it transformed into the center for African American culture, business and entertainment in the city.

Like many segregation-era Black communities across the nation, Bronzeville declined economically after World War II. A number of public policy and infrastructure decisions, including the opening of the Day Ryan Expressway in 1961 and construction of several public housing projects by the Chicago Housing Authority between 1939 and 1970, played a negative role in the neighborhood’s quality of life. Home to the largest concentration of public housing projects in the country, many upper- and middle-class families left the community following desegregation, and poverty overwhelmed the neighborhood.

Due to management problems and deteriorated living conditions, the U.S. Department of Housing and Urban Development took over the Chicago Housing Authority’s public housing projects in 1995. With a goal of creating improved public housing, the majority of Bronzeville’s crime-riddled public housing complexes were razed over the next decade as a part of a plan for transformation. But with several large public housing buildings razed, as well as empty lots left over from dilapidated housing demolitions, the neighborhood became home to more than 2,000 city-owned vacant lots by the early 2000s.

Today, Bronzeville is an example of a historic Black community where revitalization is underway, but unlike many neighborhoods facing gentrification and the displacement of longtime residents, the neighborhood continues to maintain its cultural heritage. Some believe it could become a model for other communities seeking to revitalize without gentrification and displacement.

According to a recent article by Crain’s, what makes Bronzeville’s transition different from other places in Chicago where gentrification displaced longtime residents, such as Pilsen and the 606 Trail area, is that the neighborhood has thousands of vacant lots caused by years of disinvestment. Developers who once viewed them as eyesores that depressed home values in the area are now rushing to develop them. That’s lifting the area’s housing stock and income profile without driving residents away.

In addition, Bronzeville’s growth is largely being fueled by residents who have ascended the income ladder and others “returning” 30 or 40 years after the Black middle-class largely left the community. This phenomenon is known as “withintrification“, a term coined by University of Pittsburgh Professor John Wallace in 2016. In contrast to gentrification, withintrification is revitalization driven by the people already in the neighborhood. It means identifying assets in the community, bringing them together under common objectives and raising the value of the place from within at a pace appropriate for revitalizing the existing community, not displacing it. The current residents of the community take the lead in revitalization, rather than newcomers or outside developers telling residents what they need — and ultimately pricing them out.

Like Bronzeville, withintrification is a revitalization strategy currently underway in Jacksonville’s Historic Eastside community. The strategy (which will be highlighted in The Jaxson‘s March 26th Stadium District & Historic Eastside walking tour) could be applicable to similar communities across the country.

Here are a few of Bronzeville’s sites, scenes and redevelopment projects featuring withintrification strategies that may be applicable to neighborhoods in Jacksonville:

One of the lost truths of Jacksonville’s storied past is that it was known for having a progressive minority community during the late 19th Century. So progressive that it caught the attention of Ida B. Wells in 1892. On October 26, 1892, Wells began to publish her research on lynching in a pamphlet titled “Southern Horrors: Lynch Law in All Its Phases.” After highlighting several lynching cases across the country, Wells concluded her document by using Jacksonville as an example that self-help could overcome lynchings:

“Of the many inhuman outrages of this present year, the only case where the proposed lynching did not occur, was where the men armed themselves in Jacksonville, Fla., and Paducah, Ky., and prevented it. The only times an Afro-American who was assaulted got away has been when he had a gun and used it in self-defense. The lesson this teaches and which every Afro-American should ponder well, is that a Winchester rifle should have a place of honor in every black home, and it should be used for that protection which the law refuses to give.”

Subjected to continued threats for her outspoken nature, Wells eventually left the South for Chicago’s Bronzeville, where she remained active in both the Civil Rights and women’s suffrage movements, becoming the most famous Black woman in early 20th Century America.

The Ida B. Wells Homes, which also comprised the Clarence Darrow Homes and Madden Park Homes, was a Chicago Housing Authority public housing project that dated back to 1939. With 1,662 units, the public housing complex had become characterized by gang violence, crime and neglect by the housing authority. In 2002, the public housing complex was demolished and eventually replaced with a mixed-income community called Oakwood Shores. In 2016, Midwestern grocery store chain Mariano’s opened a new 74,800-square-foot grocery store on a portion of the former public housing development site. The opening of the store eliminated a food desert and its architectural elements pay homage to the neighborhood’s history and pioneering residents who once lived in Bronzeville. In addition, the new store created 400 jobs in the neighborhood and it features space for products produced by minority entrepreneurs.

The Flats on the Drive condominium development was constructed in 2020 on South Martin Luther King Drive. In 2000, there were more than 2,000 vacant properties in Bronzeville. Over the last two decades, the neighborhood’s vacant lots have become desirable for developers and newcomers seeking more affordable housing options in close proximity to the Loop and the lakefront park system.

New two-story, single family residences were constructed in 2017. Targeting new owner-occupied housing on vacant lots within the neighborhood has played an important role in limiting the displacement of existing and long time residents.

From the 1920s through the 1960s, Bronzeville was the center of African American culture and business in Chicago. During this period of time, East 47th Street in the vicinity of South Martin Luther King Drive emerged as a major destination for shopping, dining and entertainment. Home to venues such as The Regal, Savoy, Chez Paree and the Parkway Ballroom, many legendary Chitlin Circuit acts like Lena Horne, Duke Ellington, Josephine Baker, Louis Armstrong and Ella Fitzgerald spent time on East 47th Street. Today, East 47th Street survives as a business district in the heart of Bronzeville.

Centered around the intersection of East 47th Street and South Martin Luther King Drive, this section of Bronzeville was a national stop for Blues as musicians from Southern cities introduced the genre to the Midwest during the Great Migration. East 47th Street is served by the Chicago ‘L’ rapid transit station at 314 E. 47th St. Now the Chicago Transit Authority’s Green Line, the elevated transit line opened on August 15, 1892, when South Side Elevated Railroad extended its service south to serve the Chicago World’s Fair in 1893.

Many sites that are important to the community have been locally landmarked and added to the National Register, setting the stage for their restoration and preservation, such as the Rosenwald Court Apartments at East 47th Street and South Michigan Avenue.  Originally called the Michigan Boulevard Garden Apartments, the development was built in 1930 by former Sears, Roebuck & Co. President Julius Rosenwald. Provided as workforce housing during the Great Migration, past residents include Nat King Cole, Quincy Jones and boxer Joe Louis. With this rich history, the site was added to the National Register of Historic Places in 1981. Under the ownership of the Chicago Housing Authority, the complex fell into despair and was closed in 2000.

Faced with the ongoing threat of demolition, residents advocated for nearly two decades to save the complex, leading to its being added to the Landmarks Illinois Most Endangered Historic Places list in 2002 and the National Trust for Historic Places America’s 11 Most Endangered Historic Places list a year later. Overcoming potential demolition, the complex was ultimately saved and renovated into a $132 million mixed-use affordable-housing development in 2016. Now, once long boarded-up storefronts along West 47th Street are occupied by tenants such as Sip & Savor and Shawn Michelle’s Homemade Ice Cream.

The Forum Bronzeville at East 43rd Street and South Calumet Avenue is believed to be Chicago’s oldest assembly and social hall. Originally completed in 1892, it once served as the headquarters for the Improved Benevolent and Protective Order of the Elks, and its auditorium and ballroom were central to life in Bronzeville during the height of the Great Migration. Its massive dance floor played host to jazz and blues era greats including Nat King Cole, Muddy Waters and Milt Hinton. Targeted for preservation and restoration, The Forum was added to the National Register of Historic Places in 2019.

The Shops and Lofts at 47 development at the intersection of East 47th Street and South Cottage Grove Avenue. Completed in 2014, it was the first mixed-use project built in Bronzeville in over 50 years. The $46 million development includes a street-level Walmart Neighborhood Market and 96 mixed-income rental units on the upper floors. 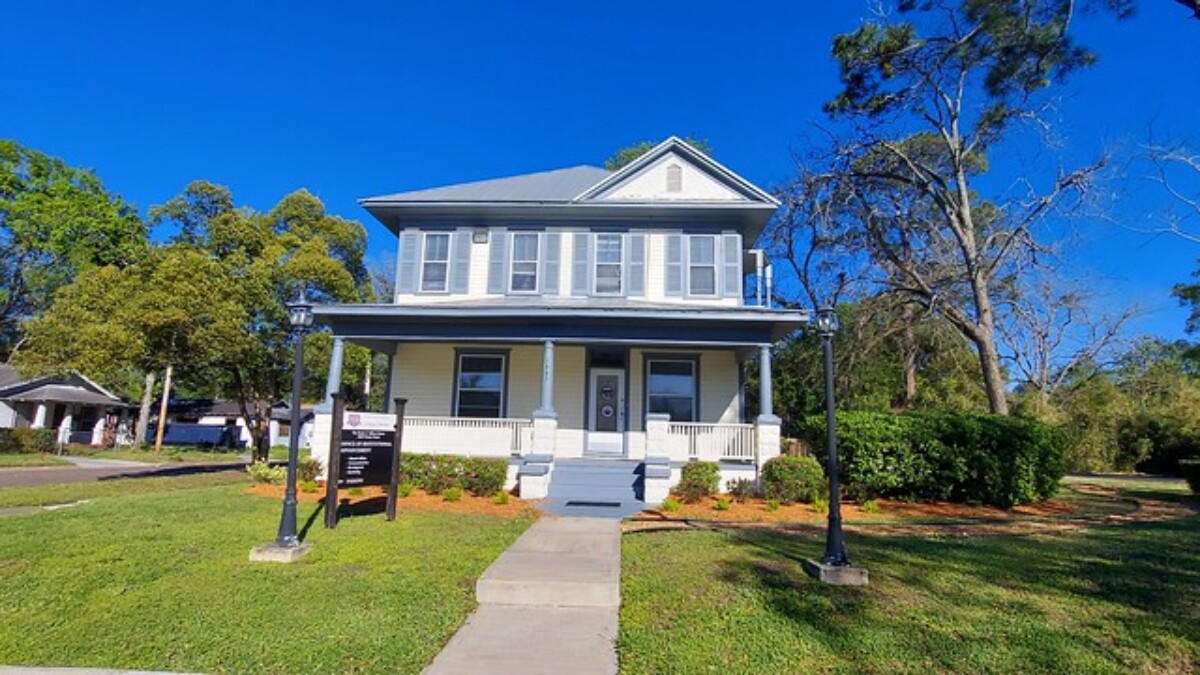 The Jaxson THE JAXSON | 6 women’s history sites in Jacksonville

In honor of Women’s History Month, here are six sites associated with women who transformed our community and nation. Born Ninah May Holden in 1875 and the wife of lumber magnate Arthur Cummer, Ninah was an avid gardener, parks advocate, art collector and philanthropist. She organized relief efforts in response to the Great Fire of 1901 and served as a ...
END_OF_DOCUMENT_TOKEN_TO_BE_REPLACED
Read More