Fun and games in the Florida Legislature 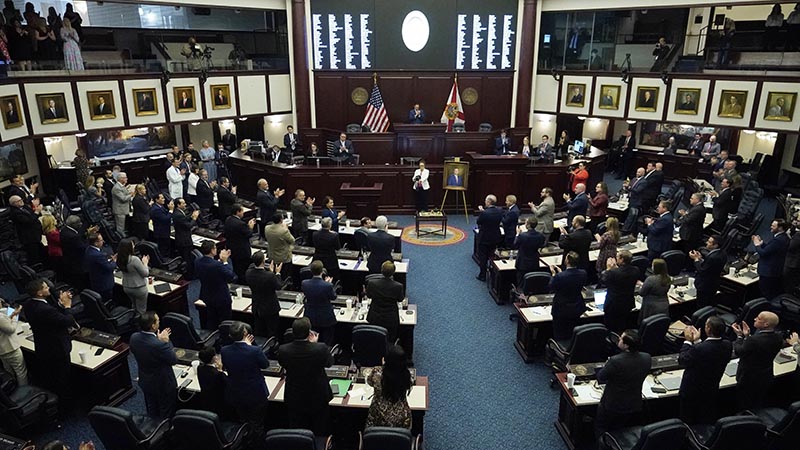 Members of the Florida House of Representatives give Speaker of the House Chris Sprowls a standing ovation after his farewell speech on Thursday, March 10, 2022. | AP Photo/Wilfredo Lee

Florida has gotten a well-earned rep for being the country’s sideshow. “Florida Man” headlines alone illustrate why we’re considered America’s three-ring circus. (No shade to the dearly departed Barnum & Bailey from Sarasota.) But there comes a point for every prankster and practical joker, for every comedian, comic, and clown when you realize your audience is no longer laughing with you but at you.

I’m not sure some Florida politicos will ever realize that their decisions make our state the laughing stock compared to more progressive places in the nation.

While the Republican Party is adept at winning elections in Florida, the consistency of the left lean in presidential election popular votes since at least 2000 is telling. But pockets of progressives are no match for the red lines that have sent a majority GOP to the statehouse since the early 90s.

Lawmakers’ fealty to conservatism and fidelity to the Republican Party specifically gave us 2005’s Stand Your Ground law. Florida was the first in the nation to pass the statute before it was exported across the country and adopted in some way by 37 other states. But if “Stand Your Ground” was the lead single from the Florida album Foolishness, then the recently passed bills out of the Legislature make up the B-sides and deep cuts only true fans can appreciate.

This year, Governor Ron DeSantis will certainly sign (or has already signed) bills into law that:

Many of these laws have passed strictly along partisan lines—under the guise that they put parents in control of their children’s education, prevent fraud in our elections, protect the lives of the unborn, and ensure that undocumented immigrants aren’t taking jobs away from out-of-work citizens. All of these bills are coded in the language of care as if they are doing the public a favor and looking after their best interests. You know what else was coded in the language of care? Slavery. Because what would us darkies do if left to our own devices?

Did you cringe reading that last sentence? Good. The Florida Legislature is what legalized violence looks like. It starts small like the tiny, baby steps requested in the children’s game “Mother May I?” But as the saying goes, if you give an inch, they’ll take a mile. Florida has surpassed the mile. Its protection of the sanctity of elections, its care and concern for parents, for babies, for jobs, for students, is harmful to those who identify as BIPOC or LGBTQ+, to women, to the undocumented, to those who dare to want to learn something different.

As humans, when our sense of fear is triggered so too is our fight-or-flight response. By legislating the inherent fear of the other coded in the language of care we are also willfully ignoring the harm that can come to that other when the fight response is activated. Harm easily leads to hate. Hate easily manifests as violence.

A social justice activist recently described Florida to me as a training ground, a petri dish for legislation that begins here and spreads across the country. Like yeast or bacteria it only takes a sprinkle of these policies that get tested, tried, and trusted in Florida before they crawl across the nation county by county, state by state, affecting everyone. These local and state issues will become national platforms. Guiding lights and the origination points for the future direction of America.

But for now it’s all fun and games. A day at the circus. A night at the comedy club. Go ahead, keep laughing.