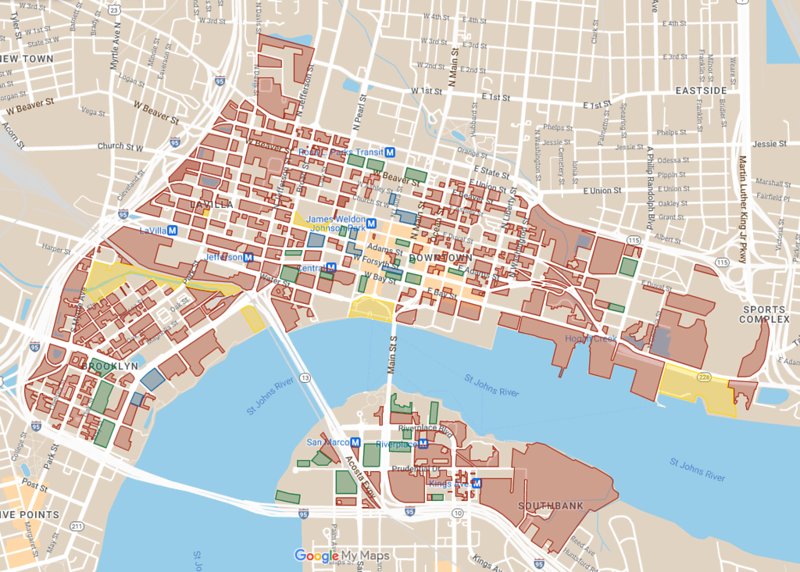 Despite a common perception that parking is difficult in the city center, Downtown Jacksonville has more surface parking lots, garages and empty land – in other words, “parking craters” – than standing buildings. This vast amount of dead space has long been one of the biggest hindrances to Downtown’s progress.

What is a parking crater?

Urban planners have been grappling with the problem of vast swaths of empty land in the middle of Downtowns and other urban areas long before there was a term for it. Back in 2011, fellow Jaxson cofounder Ennis Davis wrote about the prevalence of empty lots in Downtown Jacksonville and other cities. The tyranny of parking lots is also a recurring theme in Donald Shoup’s classic 2005 urban planning text The High Cost of Free Parking, which argues that much surface parking owes its existence to local governments’ minimum parking requirements and related policies, rather than to actual need or market demand.

The primary problem of parking craters has to do with what urban planners call the walkshed, or pedestrian shed. This is the distance most pedestrians will comfortably walk to reach a destination. Studies show this is about a 5-minute walk, or about 1/4 mile. The more amenities that can be clustered within the same walkable area, the more energy and vibrancy will result. Urban planners have increasingly embraced the concept of the walkshed since the turn of the 21st Century, but the idea is rooted in the walkable form of neighborhood development widely employed in the early 20th Century and before. As far back as 1929, New York City planner Clarence Perry identified a quarter-mile walk as key to developing a vibrant, self-contained neighborhood unit.

Researchers have noted that the distance people will walk comfortably may be shortened or extended depending on how pedestrian-friendly the area is. This is where parking craters are an issue. A built environment with good pedestrian infrastructure and active storefronts and amenities on the street level create energy and encourage people to walk more, but empty lots create large stretches of dead space that are inhospitable for pedestrians. Unfortunately, Downtown Jacksonville has become a perfect example (or cautionary tale) of the negative effect dead space has on the vibrancy of an area.

There’s a common perception that Downtown Jacksonville suffers from a lack of parking, and that this is a major reason it continues to lag behind our peer cities’ downtowns. While parking difficulties may certainly be keeping some individuals from coming Downtown, a look at the data suggests that parking supply isn’t a major factor in Downtown’s struggles compared to others that hold it back. Many cities have vibrant Downtowns despite having less or more difficult parking than Jacksonville. As of 2019, Downtown Jacksonville had 44,000 public parking spaces to Nashville’s 39,000, but Nashville’s Downtown is considerably livelier. Downtown Miami has even fewer public parking spots – 34,000 – despite being several times the size of either city.

Downtown Jacksonville does have one major parking problem: Unfortunately, it has considerably more parking lots and other dead space than actively used buildings. A number of its buildings are isolated in a sea of surface lots, and we keep razing buildings to create even more.

These maps illustrate the huge number of empty lots in the area included in the city’s definition of Downtown, which includes not only the Northbank but Brooklyn, LaVilla, the Southbank and the Stadium District. Not all of this space is actually available for public parking; some of it is reserved for private parking and some of it prohibits any parking, creating a crater without the parking. Others are retention ponds. A significant number of these lots are owned by the city. On the other hand, the map reveals why it’s so much more pleasant to walk around in the Northbank core than, say, LaVilla – there are comparatively more intact buildings and fewer empty lots to walk past.

Parking lots aren’t the only dead spaces to be found in Downtown Jacksonville. These map shows official park space that isn’t currently developed (developed parks are not included). Some of these yellow areas, such as the stretch along McCoys Creek and Lift E’vry Voice and Sing Park on Jefferson Street, have development plans currently moving forward. Others, like the former Landing site (“Lenny’s Lawn”) and Metropolitan Park, are years away from being developed. Together with the other empty lots, this has created approximately 12 near-continuous blocks of grass on the waterfront.

Empty lots aren’t the only things that create dead space Downtown. Many parking garages create blank walls that sometimes encompass entire blocks. For this reason, some more recent garages are incorporated into buildings or are wrapped with retail bays that reduce the amount of dead space they create on the street. In these maps, the green spaces represent freestanding garages with no current retail, while the blue spaces are garages with at least some ground-floor retail.

These maps show that parking craters are a deep-seated problem for Downtown Jacksonville, but they also show where targeting specific areas for redevelopment can pay big dividends. The Northbank core, the historic city center, has fewer craters today than surrounding neighborhoods and far more density within the 1/4-mile walkshed. As we’ve written about before, the area is also seeing a renaissance of adaptive reuse and new development. As such, it represents perhaps the single best opportunity in all of Downtown for the city to build on what’s working and create the best return on investment.