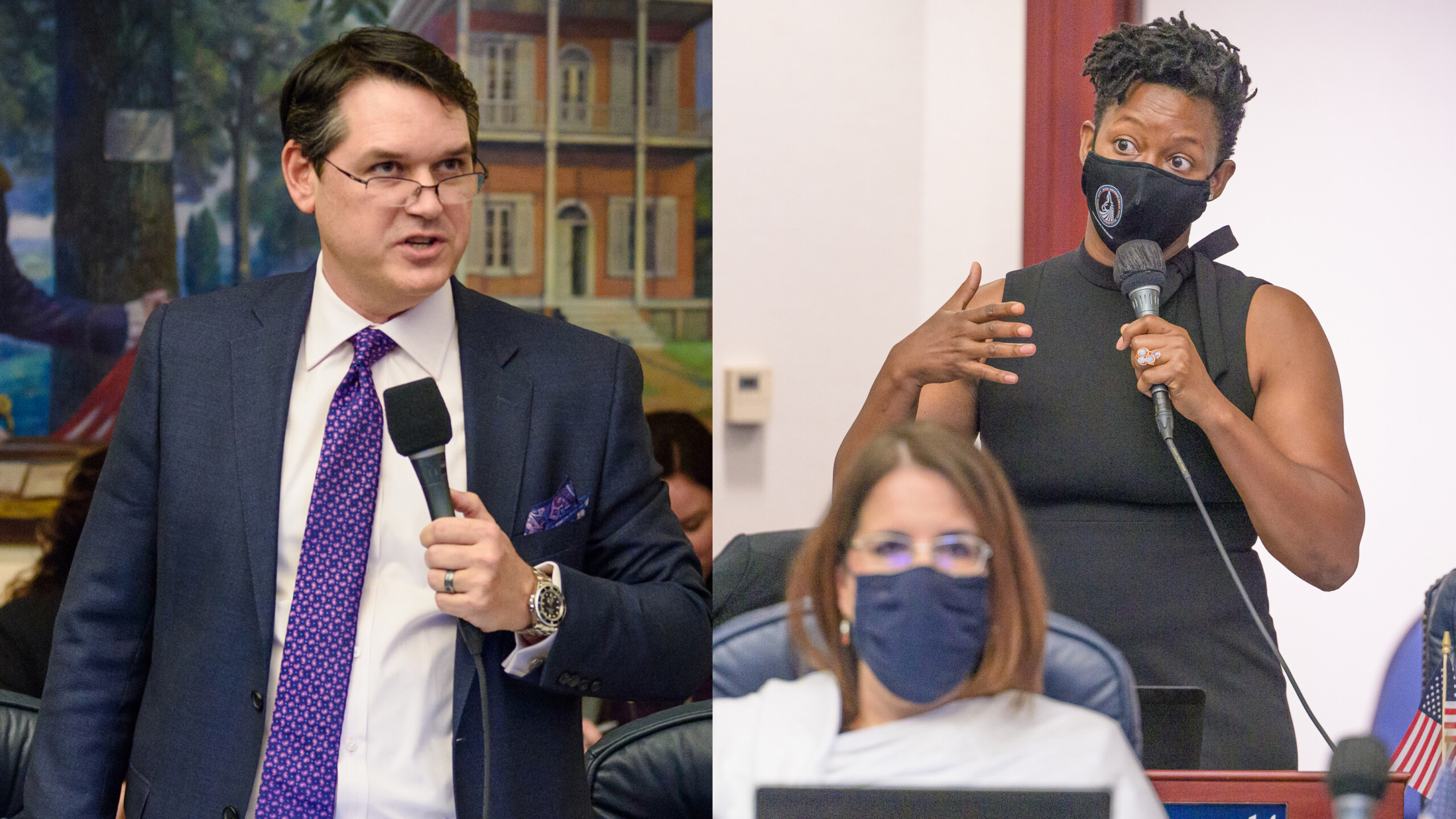 Duval County legislators were at the center of drama in the Florida Legislature last week, and the confrontation spoke to an essential truth in regional politics: Jacksonville has not resolved its race issues.

As the House approved a ban on abortions after 15 weeks (that’s a tad more than three months past conception), protests rose in the chamber, with chants of “My body, my choice!” Rep. Cord Byrd, a Republican who represents Jacksonville’s beaches and Nassau County in the current House District 11, took umbrage.

Not at the protesters, contended Rep. Angie Nixon, a Democrat from Jacksonville’s House District 14, but at members of the legislative Black Caucus, whom Nixon and other Democrats say Byrd targeted.

“He turned around and began antagonizing and cussing at Black Caucus members during the HB 5 protest in the gallery. I’m disgusted. We can debate our values but to cuss Black Members out on the House floor illustrates he’s unfit to be in office,” Nixon asserted. “We are NOT f***ing jokes as he professed on the House floor.”

“He mouthed off to Rep. Travarus McCurdy calling him a f***ing joke after mouthing to many of us ‘I hope you’re f***ing proud’ during the protests in the gallery. As if we had something to do with it,” Nixon alleged.

Byrd, of course, tells it differently. He said he was irked with the protesters, calling them “f****ing jokes,” and went on to say Nixon is a “one-trick pony,” maligning political opponents as racists. He thinks the incident is just an example of her manufacturing a narrative.

Byrd apologized to Rep. McCurdy at the behest of Speaker Chris Sprowls, but created another issue in doing so. Nixon said Byrd then complained that she was calling him a white supremacist and a racist back home, which Nixon denies.

Nixon wants a censure of Byrd, but that doesn’t appear likely: the Speaker’s Office said Thursday that the matter had been “resolved.”

And that’s this column’s response too.

Having interviewed both Byrd and Nixon about what happened last week, I can tell you this: Both believe they are and were in the right.

Nixon proactively messaged and Byrd got back to me quickly to give his side of the story, which isn’t always the case for a politician under fire on a statewide level. But it’s what people do when they believe they have a case.

Byrd isn’t backing down from his stance and his version of the narrative, even as multiple Democrats contest it and no Republicans are taking his side.

The Speaker’s Office’s assertion that the matter is resolved is a calculated play, based on the realities of the legislative session’s moving toward budget conferences, with unresolved issues with the Senate and the governor’s office on a number of matters, not the least of which is the congressional redistricting map (which has direct effects on Duval, as we have noted here.)

Yet if Byrd and Nixon serve together for another two years, which could happen, given both are candidates for re-election in 2022, how do they work together on anything?

Duval Delegation meetings are going to have to happen. Stakeholders will have to be heard.

Though there is a persistent narrative that Byrd wants to be a judge, which likely would happen through gubernatorial appointment given that he is a filed House candidate currently, it’s hard to assume Byrd is bound for the bench. Especially now.

Byrd has flirted over the years with the iconography and the political totems of the hard right. He left Twitter last year around the Jan. 6 Capitol riots, recall, and that was after a campaign where he and his wife were linked to Proud Boys and Q-Anon elements.

That didn’t hurt him with the voters in HD 11, which included a lot of Nassau County.

But his new district cuts out Nassau and replaces it with areas on the other side of the Intracoastal Waterway, less hospitable terrain for a candidate whose big pushes have been base-baiting legislation targeting immigrants, via banning sanctuary cities and tweaking the E-Verify citizenship-check system.

Nixon, meanwhile, is a capital-D Democrat. The abortion debate was a flashpoint for Byrd and Nixon, but there is little common ground between the two otherwise.

In 2022, it’s sobering to think about a racially driven argument between two local legislators on the House floor, but racial tensions among politicians are not anomalous in local history.

A few decades back, police were called to ensure Black members of the Jacksonville City Council could not walk out in protest of a budget vote, and they used handcuffs and bolted doors to enforce that mandate from then-Council President Tillie Fowler. That was described by one local leader at the time as a “preview of apartheid.”

That wouldn’t happen today, and indeed the current Council has a Black president and vice president for the first time ever, both Republicans elected with strong White support in citywide contests.

But beyond leadership votes, racial politics of the past drive the structure of the Council itself.

The current redistricting discussion has roiled people citywide about the packing of Black Jacksonville residents into four districts North and West of the river. One vivid example of how the dynamic plays out: The serpentine District 9, which parallels District 14, absorbs Black voters and allows moneyed White Republicans to play and win in a “purple” Riverside/Avondale/Ortega district.

This cartography protects certain political players. (The Gaffneys in District 7 seem to have a generational hold on their seat, with Reggie Gaffney Sr. focusing intently in redistricting on ensuring White voters were cut out of the new map ahead of Reggie Gaffney Jr.’s 2023 run for the seat his father holds. Johnny Gaffney had held the seat before Reggie Sr., meaning we could see the same family hold effectively the same seat for over two decades if Reggie Jr. gets two terms.)

These maps also allow for a Republican supermajority on the Council, despite Jacksonville’s being D+5.

The result of Jacksonville politicians choosing to maintain the illusion this is a Republican supermajority city via creative map drawing?

Well, it’s been 50+ years, and we’re still talking about the “unfulfilled promises of Consolidation.” And even simple proposals, like Garrett Dennis’ cannabis decriminalization measure that would help to remove the temptation for pretextual police stops of Black men, went up in smoke.

We are headed into another decade with the same crap maps, and the locals will rehash the same arguments long resolved in peer cities across the region and beyond.

Issues of race and equity will be back burnered by another generation of local politicos until they are unavoidable. And as quickly as possible, they will be avoided again. 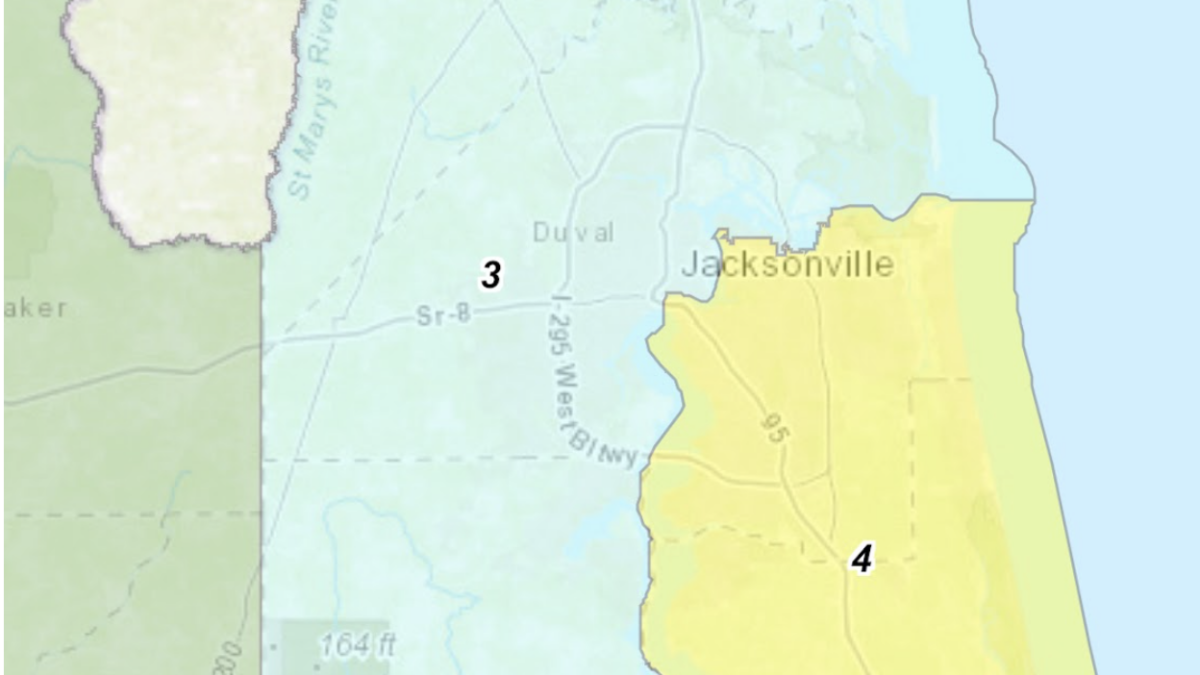 Many of those reading this rejoiced last week when the Florida Supreme Court rebuffed Gov. Ron DeSantis’ unprecedented ask for an advisory opinion regarding his proposed congressional redistricting map. DeSantis’ general counsel put forth a map, as we have discussed here, that would eliminate the Fifth Congressional District, which protects the interests of Black voters in North Florida by connecting ...
END_OF_DOCUMENT_TOKEN_TO_BE_REPLACED
Read More