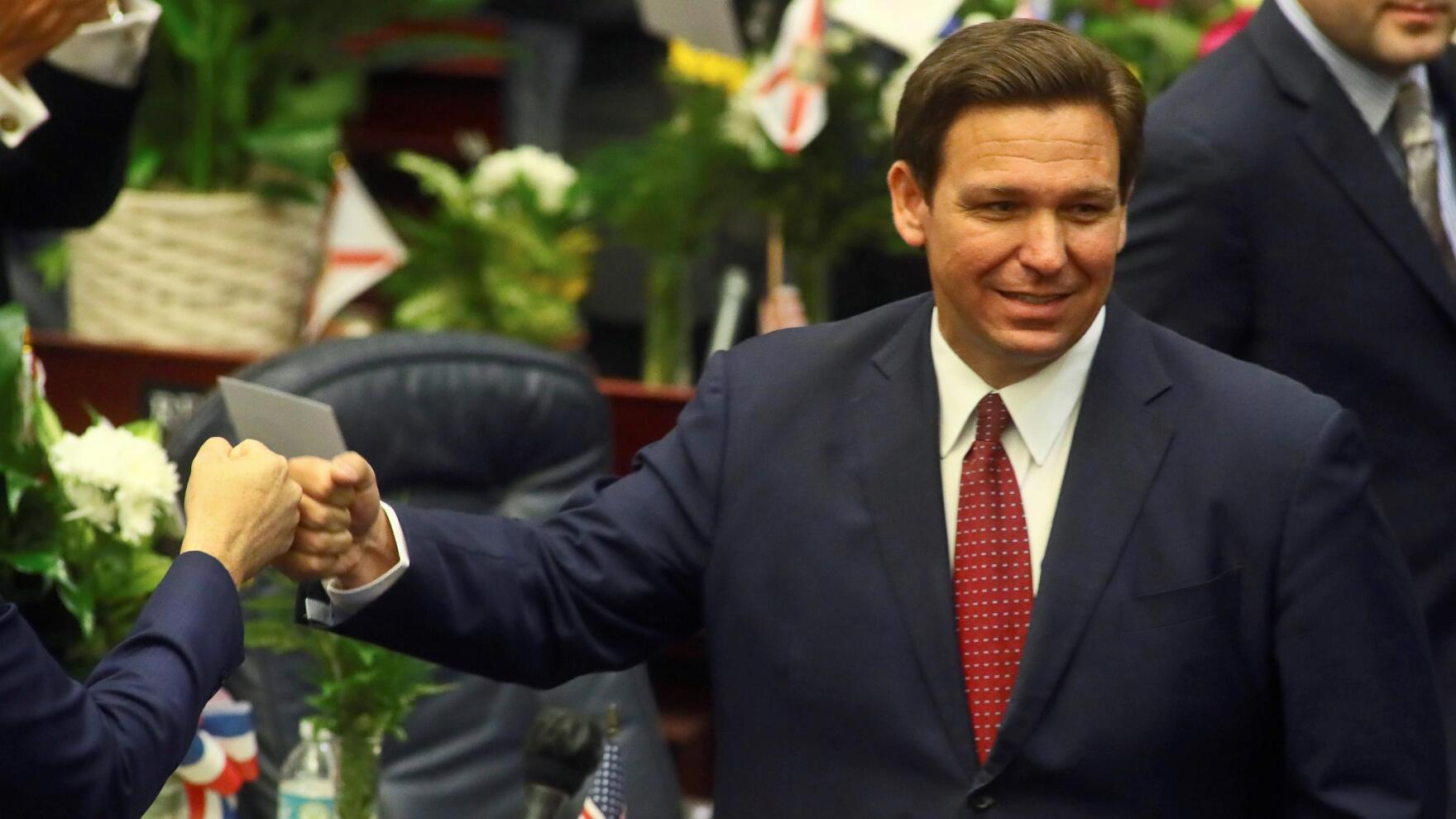 Florida Gov. Ron DeSantis fist bumps with legislators Tuesday, March 2, 2021, as he enters the House of Representatives prior to his State of the State address at the Capitol in Tallahassee. | Phil Sears, Associated Press

Ron DeSantis stopped doing press events for the most part.

His Twitter account aroused suspicion at year’s end, by recycling an appreciation from a couple weeks before for a bagel shop in Ocala.

He did a pre-taped segment for Christmas Day on Fox News, but it was the same old, same old in terms of the talking points.

Critics pounced on his relative lack of visibility.

“Hasn’t Gov. DeSantis been inexplicably missing for like 2 weeks? If he’s around, I would be happy to say hello. His social media team seems to have been posting old photos for weeks,” tweeted Rep. Alexandria Ocasio-Cortez, visiting the state on vacation.

“As governor, I’ll show up,” Nikki Fried, who has been running for governor for what feels like a decade, also said on Twitter Friday.

Show up for what?

Fried’s response was notable because it came after Fox News reported that DeSantis was out of the public eye in part because his wife Casey was having breast cancer treatment, and he was at her side.

It continued a recent theme of Fried’s casting aspersions at DeSantis’ integrity, which included an unsupported claim that board slots at universities were only for people who had donated six figures to his political operation. Some big donors got spots, but in many other cases there was no correlation between contributions and appointments.

Through the holiday season, the governor’s public schedule included meetings with staff at the Capitol and other quotidian events, which isn’t a full enough accounting of his day for many people, but which is par for the course for the weeks before the legislative session begins more years than not.

Some even said DeSantis was on vacation or in virus quarantine, as if they weren’t aware of the published schedule disproving those claims. If he had just used the “staff and call time” schedule notation that other governors and lieutenant governors have employed over the years, would that have been better?

Beyond the fabricated controversy here, which really involves the governor’s not doing press conferences about the latest COVID-19 case surge as if his position is not crystal clear, there is a salient question: Does the governor deserve privacy when it comes to struggles of this magnitude?

Imagine you are this governor, who made a very particular set of sacrifices and political bets a while back. You have aggressively pushed to maximize every opportunity since the heady days of the Tea Party movement. You couldn’t get the Senate seat, but you did ride the Trump wave to the Governor’s Mansion. Three beautiful kids and a halcion political future.

Then the woman you love gets a cancer diagnosis. And your world inexorably changes.

Would you feel like you had to give a play by play of the healing process to your political enemies? Do you owe anyone an itinerary of your wife’s struggles? Does one punch a timeclock when headed into the hospital?

These are legitimate questions, even if you are not a fan of Ron DeSantis the politician, and you think his messaging throughout the pandemic is tailored toward Republican primary voters in 2024.

DeSantis of course has frequently addressed COVID-19, and has evolved on it since 2020, becoming more oppositional to what he frames as federal government overreach since Biden got into office. The state is involved in many so-called “vaccine mandate” legal challenges, and Anthony Fauci and the like offer grist for DeSantis’ fundraising and policy initiatives.

Those with something of a long-term memory will recall DeSantis embraced various restrictions early in the pandemic. Bars were closed, schools were remote, and he issued a stay-at-home order in 2020, which Fried herself flouted to drive out of state to pick up her stepchildren and record an in-studio TV hit.

He has since made his position clear, ad nauseum, that “lockdowns” don’t work, and neither do masks, and that life presses on — omicron variant notwithstanding — because the “biomedical security state” is the real existential threat.

He seems to be, at best, agnostic to booster vaccines. He told Fox News’ Maria Bartiromo that he’d just gotten “the normal shot” when asked if he’d gotten the booster shot. His normal shot, recall, was the “one and done” jab from Johnson and Johnson.

Is DeSantis’ the correct position, amid a spike in cases and a shortage of tests and all of the other hallmarks of this latest wave of the pandemic?

It seems to be the one that is prevailing in terms of political dynamics, with the White House looking rudderless yet again. Voters will have their say in November.

DeSantis has built a national platform in the last year largely off his COVID positioning, while Fried resorts to weekly play by plays on Twitter of her increasingly small dollar fundraising, as she falls behind Charlie Crist in monthly totals.

But the Democratic issue is bigger than Fried’s travails.

National Democrats don’t appear to be too stoked to pour soft money into the state in 2022, the way they did in 2018. And is there any poll of the governor’s race in recent months showing it especially close, no matter who the Democratic nominee is?

That’s the context for this attack on Desantis, yet another swing on a pitch outside the strike zone.

It’s as if the governor’s critics, desperate to delegitimize him during the slowest news week of the year, glommed onto an issue of optics to feed a convenient and pre-existent #DeathSantis caricature, without considering the larger issue of the real and non-negotiable struggles the DeSantis family is dealing with. The enduring memory of this debacle won’t be “Where’s Ron?”

It will be, instead, political opportunists looking as if they are trying to score points off cancer treatments. And a reminder of Democrats’ history of unforced errors in this state.