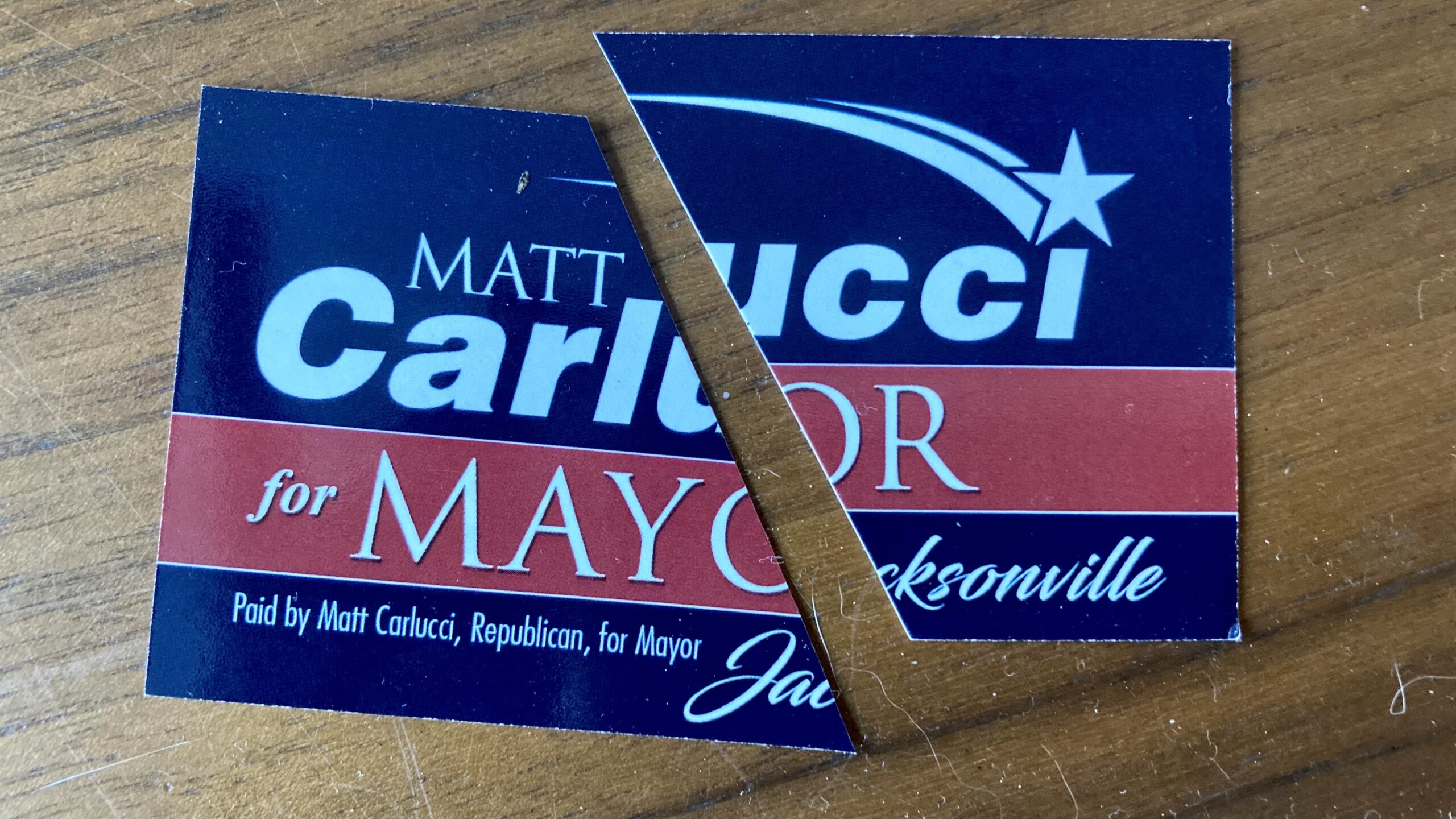 Carlucci launched his campaign at the beginning of 2021, with strong fundraising and seeming momentum. But the optimism of spring and summer gave way to the harsher reality of fall and a cold, cold winter ahead.

Early in his term, Carlucci said he didn’t want to run for mayor. But by January, he had changed his mind.

Strong fundraising followed. But in the spring, Carlucci fired a Council aide. And whether it was correlation or causation, the narrative changed.

Notably, his lead political consultant quit the campaign, saying that Carlucci himself should get out of the race.

“Voluntarily remove yourself from the mayor’s race. You can cite “personal” reasons because it is apparent you have several,” veteran Jacksonville operative Mike Tolbert sniped.

“What you have done to someone who has represented you apparently well and with loyalty is outrageous and most likely illegal. I can only assume that you somehow believed that your actions would be justified because of a personal situation. You must also have thought that no one would have noticed or cared, or you understood that such behavior would destroy your dream of being mayor and you were willing to blow up everything,” Tolbert wrote.

Carlucci tried to spin the loss of his consultants, saying he was auditioning “the best and the brightest” to replace them. But from then on, he appeared to be a dead man walking.

In May, when things went sour, he had roughly $700,000 on hand for his campaign and political committee. Six months later, he’s ending the campaign with roughly $242,000 in hard money and approximately $696,000 in his political committee. He’s been defensive on occasion when discussing his fundraising, which is always a bad sign.

The gossip mill said he was getting out, but until last week he and those close to him told me and other reporters he was staying in the race. But it was difficult to see his lane on the Republican side of the ballot, with other people gaining momentum and with real questions about whether an older white male is a citywide draw in an increasingly diverse and young Duval County.

Jacksonville Chamber of Commerce CEO Daniel Davis has been setting up for this race for nearly a decade, and he has $3 million or so in a political committee. And in just two months with a political committee, Councilwoman LeAnna Cumber had eclipsed Carlucci’s total fundraising for a year.

We have been assured that Cumber’s strong start didn’t scare Carlucci out of the race, but even those assurances come with the acknowledgement that the 2023 race was hotter than Carlucci anticipated last winter.

Though Carlucci’s fundraising dominated that of cash-strapped conservative Al Ferraro, who likely will need to reconsider his own candidacy given his own donation doldrums, that simply wouldn’t be enough.

Carlucci’s exit will change the race, and an open question is where the people who supported him will ultimately go, especially since he’s not endorsing anyone yet.

A sizable chunk of his supporters will back Democrat Donna Deegan, which may (or may not) affect the dynamics of the overall race. Deegan, as we have noted, has struggled to fundraise. Could Carlucci’s exit provide a boost for the former newscaster? That’s one potential scenario.

Also by A.G. Gancarski: Primaries to watch in 2022

One suspects we haven’t seen the final field, either. Word is that Sen. Audrey Gibson is looking for a campaign to run after she’s term-limited in Tallahassee this year. Some have suggested she may jump into the mayoral race herself, and Gibson isn’t shooting down the rumors.

We will have a few live August contests in this region next summer. While top-of-the-ticket stuff leaves some intrigue for the November general election, the down-ballot stuff is often of greatest interest in these primaries. For those who need it, here’s a cheat sheet breaking down the partisan dynamics in play and the potential outcomes.  The biggest-stakes competitive primary is ...
END_OF_DOCUMENT_TOKEN_TO_BE_REPLACED
Read More