At a meeting last spring, a Jacksonville climate action advocacy group acknowledged it has a problem.

“I’m thrilled to see the leaders here today, but we’re a bunch of white people, and we need to be a much more diverse organization,” Dr. Todd Sack told the assembled members of the Jacksonville Resiliency and Climate Change Coalition (today called Resilient Jax).

The group’s steering committee agreed: Increasing diversity should be a priority when trying to effect public policy change. The acknowledgment represented a shift from the historical pattern across the globe. Environmental advocacy has long been dominated by white voices, even as people of color are more affected by climate change and pollution.

That’s been the case in Jacksonville too. For decades, the city at the mouth of the St. Johns was less known for its sights than its stench. Night and day, paper mills and other industrial facilities belched foul odors — most of them in predominantly Black neighborhoods in the city’s northwest and urban core.

“That was intentional,” said Irvin PeDro Cohen, executive director of LISC Jacksonville. He said the city allowed polluting industries in Black communities, where land was cheap and citizens’ well-being largely overlooked by the political and business establishment. This phenomenon, dubbed “environmental racism,” isn’t unique to Jacksonville. A 2017 study found that Black Americans are 75% more likely to live near facilities that produce hazardous waste.

Today, some of the factories are gone and others have changed their ways. But the legacy remains: Industrial pollutants —  among them, major contributors to climate change —  persist in the neighborhoods’ soil, water, and air.

Cohen, a Jacksonville native, said local leaders have evolved over the last century from taking a largely lackadaisical approach that allowed polluters to contaminate Black neighborhoods to today acknowledging climate issues — and beginning to talk about tackling racial disparities. City Council has formed a Special Committee on Resiliency to focus on climate change and sea level rise, which disproportionately affect poor and minority communities. The city is poised to hire its first chief resiliency officer. And local organizations have begun working with and advocating for Black residents on environmental issues, including addressing the pollution that’s harmed their health for generations.

According to the U.S. Environmental Protection Agency, the vast majority of pollution cleanups in Jacksonville are in majority-Black neighborhoods.

“Those are all sites that are in fragile neighborhoods today, and I guarantee you that kids are playing on those sites,” Cohen said. “So whatever they have buried beneath them, they are giving off, and those communities are literally taking in what those sites are emanating.”

Extreme weather caused by climate change exacerbates the issue, as pollutants are stirred up.

But even where there’s the will to clean up contamination, harden infrastructure, or build homes that are resilient to storms, the cost is often seen as prohibitive by leaders and residents alike.

“The economics of it all hasn’t made a lot of sense to some people,” Cohen said.

He’s seen this attitude as LISC works to help people in vulnerable communities achieve home ownership. It’s not that community development corporations and investors don’t care about things like hurricane resilience, Cohen said, it’s that these communities have other, more pressing needs.

“Part of our job … is convincing the people we work with on the importance of investing in [storm resistance] as well,” he said.

He said Hurricane Irma opened many eyes. Still, it can be difficult to convince residents to move out of the floodplain, as two buyback programs are incentivizing, or to support costly city investment in infrastructural improvements. It’s even more difficult without effective communication with the Black community, which Cohen said had historically been an “afterthought” among local leaders.

When a hurricane hits, that power disparity plays out with devastating effect.

“If you look at the location of the minority communities, usually they’re located in low-lying areas, flood-prone areas, areas that have been blighted over the years, due to economic depressions and just the lack of access to good resources in the communities,” said Moore.

Nearly a year after setting its own membership diversity as a priority, Resilient Jax is in dialogue with Black communities.

“We are trying to do that work and are extremely open to any community organization that represents communities of color, any community that doesn’t feel represented in the resiliency effort,” said coalition Chair Shannon Blankinship, who is also the St. Johns Riverkeeper’s advocacy director.

So far, she said Resilient Jax has connected with Northwest Jacksonville civic organizations, and there’s been some interest and a few conversations with leaders, but so far no one has joined. Consequently, Resilient Jax has held off on fully developing its own mission until it more fully represents the entire community.

“At the same time, the momentum is there,” Blankinship said. “I wish I could say that our steering committee had representation from all groups in Jacksonville … [but] right now we just don’t.”

In the meantime, Resilient Jax is offering programming about environmental issues facing the Black community. State Rep. Angie Nixon, D-Jacksonville, gave a presentation about flooding and drainage in Black neighborhoods; the Cleo Institute presented about environmental racism; and Ashantae Green, who’s also a Duval Soil & Water Conservation District supervisor, spoke about how zoning decisions and cutting down trees have made urban communities literally hotter than other areas, what’s known as the “urban heat island effect.” The group recently hired Green for communication and outreach (a position shared with Riverfront Parks Now). It’s also encouraging Black residents to engage in the Jacksonville Special Committee on Resiliency that formed last spring.

Blankinship notes storms and floods increase the risk posed by contamination, as heavy metals and chemicals such as polychlorinated biphenyls (PCBs) are uncovered from the riverbed.

Of the 71 active Superfund sites in Duval County in the EPA database, human exposure is listed as “uncontrolled” at two: Brown’s Dump and the Jacksonville Ash Site, both in the majority-Black 32209 ZIP code.

Teri Sopp’s work as director of the juvenile resentencing project at the local Public Defender’s Office has led her to investigate pollutants that have negative impacts on behavior. She said that many of her Black criminal defense clients were exposed to lead and other pollution as children.

“There are several brownfield sites, some near elementary schools,” she said. “There’s a lot of old oil farms, tank farms on Talleyrand Avenue.”

Groundwater migration of pollution is considered “uncontrolled” at one Jacksonville site, the Talleyrand area’s riverfront Kerr-McGee Chemical Corp Superfund site in 32206, another majority-Black ZIP code. According to a documentary from the Eastside Environmental Council, 32206 has the highest asthma rate in the city, 132% higher than Jacksonville as a whole. A 2011 report underwritten by the Jessie Ball DuPont Fund found that the urban core, which includes part of 32206, also has the highest rate of diabetes. Both have been linked to exposure to pollutants.

The Eastside Environmental Council says that its advocacy helped convince the EPA to place the Kerr-McGee site on the National Priorities List in 2010. The EPA was set to begin decontamination there in November of 2020.

But Joey McKinnon, a local geologist and legislative liaison with the Florida Association of Professional Geologists, said that the average Superfund site cleanup could take years, even decades.

Last year, the EPA completed a massive cleanup of the Fairfax Wood Treaters Superfund site in the 32209 ZIP code. It included removing 60,000 tons of soil and treating or disposing of 150,000 gallons of water contaminated with arsenic, chromium, and copper, as well as remediation of 12.5 acres, including 51 residences. The effort had begun a decade earlier.

Edward Waters College Professor Prabir K. Mandal has dedicated his research to health issues affecting African Americans. A 2017 paper he co-authored notes African Americans experience the highest death rates and shortest survival time from cancer. While the causes are myriad and include lack of access to preventative care, research has shown that exposure to known carcinogens, such as exhaust fumes and dioxins, are among them.

“If you are exposed to dioxin and you are breastfeeding your kids, your kids are getting the dioxin from childhood, from infancy…. These are very dangerous things,” said Mandal.

His research is finding an engaged audience among today’s students at EWC, Florida’s oldest historically Black college. Mandal said his colleagues told him he was “crazy” when he proposed adding a course dedicated to African American health.

“Every semester the class is full,” he said. 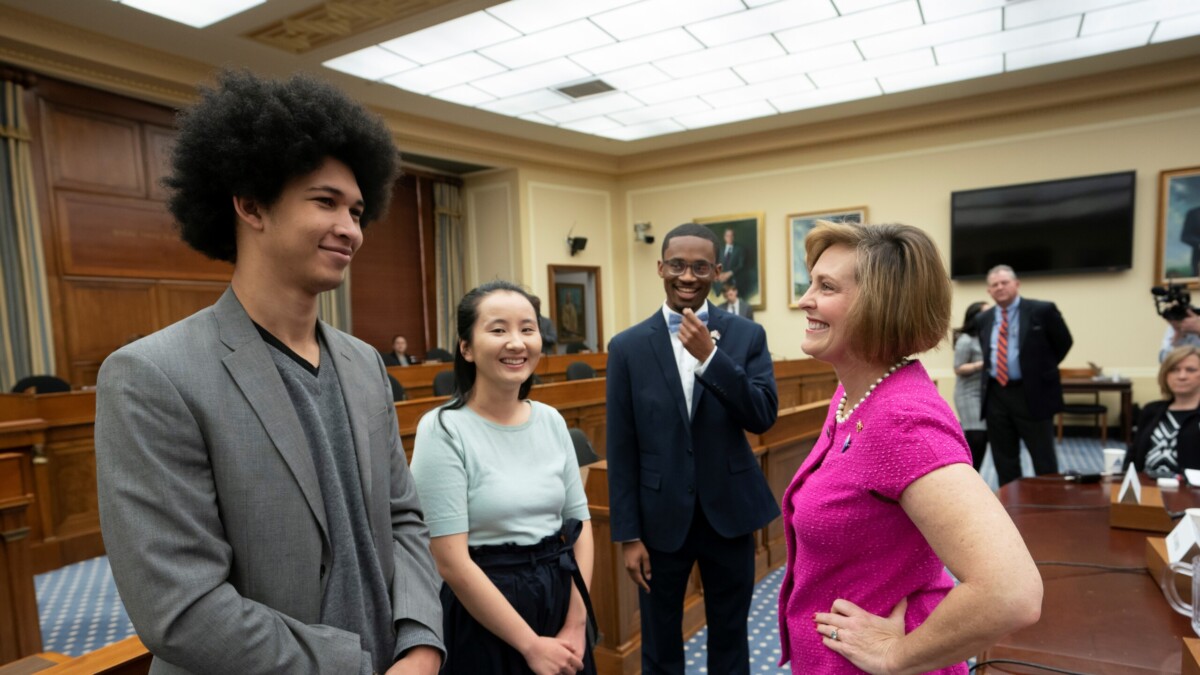 ADAPT Climate action on the rise within local communities of faith

Faith-based efforts like Green Spirits are increasingly popping up around the country as Christians — many of them young — start to push back against the skepticism of climate science that has taken root in their communities. Read More