St. Augustine struggles to fight a global threat on a small-town budget

As the holiday season approaches and residents look ahead to the annual Nights of Lights festival — a months-long tradition that sees millions of white lights strung along every corner of historic downtown St. Augustine — an old enemy is rearing its head: the sea. Increasingly, residents have to wear rain boots just to get to their cars and plan their commutes to avoid roads that are flooded with salty sea water.

“We’re a coastal city and we’re surrounded by water. It’s, of course, one of the things that makes St. Augustine beautiful and wonderful, but with sea level rise it’s also something that clearly presents us with a very real challenge about sustainability,” Mayor Tracy Upchurch said.

Founded in 1565 by Spanish explorers, St. Augustine is the oldest continuously occupied settlement of European origin in the U.S. Flooding has been a threat here for centuries, but conditions are worsening with rising seas. As local officials commit large portions of the city’s limited resources to fight flooding, they worry it won’t be enough if state, federal and international leaders don’t address climate change.

On the weekend of Sept. 19, a combination of lunar and meteorological factors combined to sweep the sea onto the streets. St. Augustine experiences similar, though usually less severe, tidal flooding — often referred to as nuisance or “sunny day” flooding — between 12 and 16 times per year.

The city also frequently floods during heavy rains. On Sept. 27, less than a week after the tidewaters had finally receded, flooding struck again, this time from above. Parts of the Old City were drenched with more than 5 inches of rain in just a few hours — a deluge the city’s aging stormwater drainage system isn’t equipped to handle.

“We locals like to joke and say, ‘You can spill a glass of water and it will flood in St. Augustine,'” said Florida Public Radio Emergency Network Meteorologist Athena Masson, who is from St. Augustine and whose family still lives in the area.

Masson said, while climate change isn’t directly causing the floods, it is making them worse and more frequent.

“Sea level rise is taking place, so of course climate change is playing a role in these flooding events,” she said.

On top of those rising sea levels, warmer temperatures — another symptom of the changing climate — increase the amount of moisture that can be held in the atmosphere. This leads to more clouds, which, in turn, lead to more rain. According to Masson, Northeast Florida experienced higher than average rain in August and September of this year.

Flooding — both from above and below — poses a unique threat to cities like St. Augustine whose economies depend on heritage tourism. Visitors are drawn to iconic landmarks like the Castillo de San Marcos, a 17th century Spanish fort, before strolling down the pedestrian-friendly streets in search of historic tours, shopping, food and drinks.

In a non-pandemic year, millions of tourists make their way to St. Augustine, which has a permanent population of less than 15,000. Of those, 95% to 99% walk down the city’s historic downtown streets, according to a recent city resilience report. These “heritage tourists” spend, on average, more than $1.6 million every day they are in St. Augustine, and each day of spending generates about 29 year-round jobs and close to a million dollars in daily income for local businesses.

Because the city’s history (with heritage resources worth an estimated $2.9 billion) is so closely tied to its economy, the city can recover faster from a disaster than a typical city its size, making history “an integral component of any resiliency strategy,” the report says.

But properties in the city’s historic districts are overwhelmingly at risk of flooding; 76% of parcels are expected to be under water during a 100-year flood, like what St. Augustine experienced during Hurricane Matthew in 2016. And though historic districts make up just 7% of the land area in St. Augustine — less than a square mile — more than a quarter of the city’s population lives in them.

St. Augustine’s archaeological sites include relics from centuries of European colonial and American history, as well as more than 4,000 years of Native American heritage. Today, nuisance flooding affects more than 60% of the archaeological zones in the city, and all sites will be vulnerable with 1.5 feet of sea level rise. On top of surface flooding, rising water tables below the ground make excavating and documenting archaeological resources more urgent.

To combat these threats, the city of St. Augustine has committed to dozens of flood mitigation projects with a combined price tag of at least tens of millions of dollars. That is no small feat in a city with an annual budget of around $60 million. Additionally, the City Commission recently formed a citizens advisory committee tasked with amending building codes to reduce flooding.

In addition to these steps, the city appointed its first chief resilience officer last year  — though the position has been at least temporarily eliminated just a year later. When the first-ever CRO Mike Cullum retired this June, the city’s capital improvements engineer Jessica Beach was tasked with the majority of his duties, for now.

Beach said, “It’s probably going to be hard for us to compete with larger entities to really get someone that is in that specialty field. I think the thought process behind it was: ‘We’ve got staff that are already doing this, that have been doing it. Let’s tap into what we currently have.'”

A city as small as St. Augustine can only afford so many people on its payroll, so those who do work for the city tend to either be part-time employees — like the mayor and city commissioners — or they wear several hats.

“We’re just not in a place where we can have a dedicated policy position,” said St. Augustine Mayor Tracy Upchurch, who also teaches law at Flagler College.

At this point, St. Johns County is not committing any funding to St. Augustine for flood mitigation projects.

“I think most communities, but certainly our community, both on the public and the private level, are pursuing all those simultaneously,” he said.

Defending has been the main focus so far in St. Augustine, through infrastructure projects like tide check valves. Adaptation by the city and by its residents primarily means raising structures. But retreat  — probably the most effective way to protect residents from the threats posed by flooding  — is an extremely challenging prospect in St. Augustine, where historic sites and buildings — which are often difficult, expensive or even impossible to relocate — are critical to the city’s identity, economy and resiliency strategy.

With no escape in sight, Upchurch worries that St. Augustine could be fighting a losing battle: if global fossil fuel emissions aren’t quickly and sharply reduced, by the end of the century the sea could regularly — even daily — spill over the defenses the city is building. 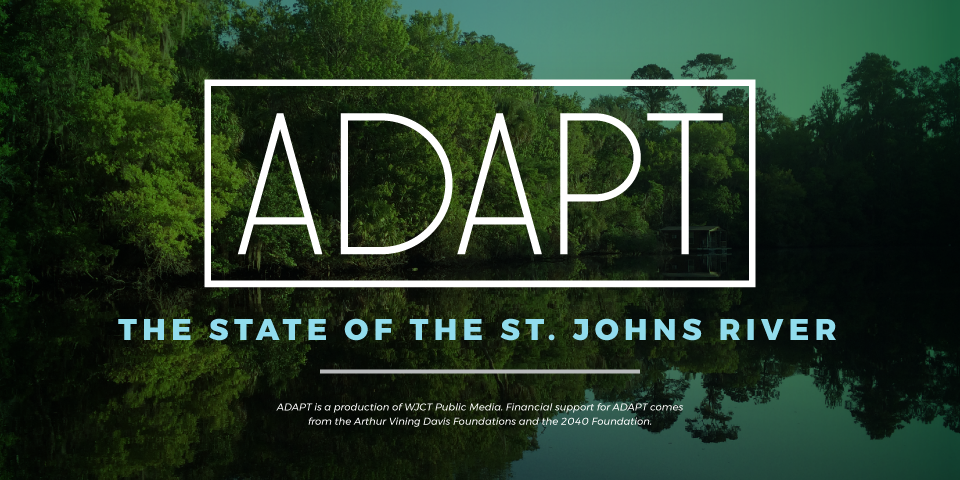 ADAPT ADAPT: The State of the St. Johns River

Following the release on October 15 of the 14th annual State of the St. Johns River report, WJCT Public Media held this virtual panel discussion allowing officials in various capacities to react to the report and reflect on how actions taken now could affect the river’s future health. Read More