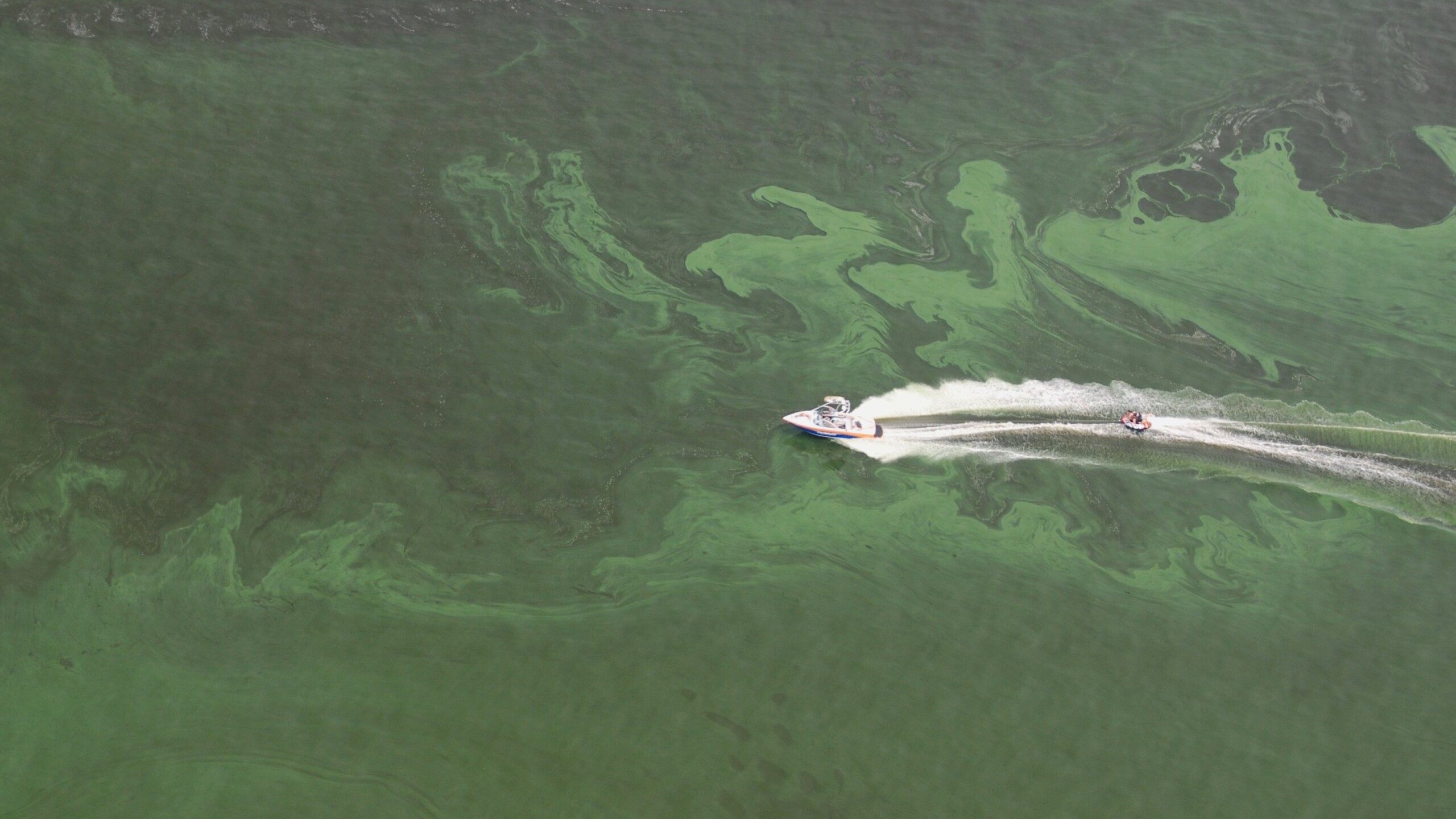 After Ian and Nicole, experts warn of health risks from blue-green algae

This story was produced through a collaboration between ADAPT and Climate Central.

Shannon Valentine-Sanders had been suffering from mysterious symptoms for a couple weeks last year when she vaguely remembers sending an emergency alert to her family from a KFC parking lot in Matlacha, on Florida’s Southwest coast. “I didn’t know where I was,” she says. “I thought I was drugged or poisoned or something.”

Seeing her pain, exhaustion and forgetfulness, hospital doctors connected her illness to toxins secreted by blue-green algae floating in mats around the sailboat she’d lived on over the summer. She’d battled to keep the ropes and hull clean, even swimming among the scum as she scrubbed.

Sixteen months after she fell ill, Valentine-Sanders remains a prisoner of her symptoms. “I just was never right after that,” she says.

Hurricanes that hit Florida in September and October this year pushed millions of gallons of nutrient-rich sewage and fertilizer into waterways across Florida, including the St. Johns River, feeding blooms that could turn toxic during the weeks and months to come.

“The pollution will stick around for a long time,” says St. Johns Riverkeeper Lisa Rinaman. “We’re not seeing any positive toxicity reports in the St. Johns at the moment, but these outbreaks, they can be toxic one day and not the next.”

Experts have long cautioned people to stay away from the blooms and to protect their kids and pets. Exposure to poisons produced by the blooms can occur through the air or through the water.

As scientists and officials monitor for new algae blooms and test them for toxins after the back-to-back storms, victims and researchers are warning health effects can last years and turn deadly. While more research is needed, it’s becoming clear that long-term maladies range from Alzheimer’s disease to liver damage.

Warming temperatures and salinity changes caused by rising sea levels and intensifying rainfall, along with fertilizer and sewage runoff, are all amplifying the growth of toxic blooms of blue-green algae  — and boosting the blooms’ armory, leading to the production of more potent poisons.

These algal blooms predominantly flourish in freshwater and are technically made up of bacteria — not plants — called cyanobacteria. Cyanobacteria are distinct from the algae responsible for “red tides” in marine environments, though both can result in harmful algal blooms.

Geoff Scott, a clinical professor at the University of South Carolina’s Arnold School of Public Health, says cyanobacteria evolved billions of years ago, when temperatures and carbon dioxide concentrations more closely resembled those being ushered in now by the effects of heat-trapping air pollution.

“These toxins were there to basically allow one species to thrive over another,” Scott says. “It is a competitive advantage to be able to produce these.”

Cyanobacteria are a natural part of freshwater ecosystems, but they can become dangerous when colonies bloom in such large amounts that they essentially overwhelm the environment, outcompeting other algae species. Blooms can form as discolored water, green scum, or dense mats of algae-like growth. Many emit a foul odor.

As blooms die and decompose, they can release toxins that are harmful to humans and other animals. These toxins can have a range of effects, including damage to the liver, kidneys, and central nervous system.

The toxins most often associated with harmful algal blooms are microcystins, which primarily affect the kidneys and liver. A growing body of research is finding meaningful connections between microcystin exposure and other health threats.

Some research shows that blue-green algae may enhance the risks of Vibrio vulnificus – another poisonous bacteria.

Vibrio, which often thrive amid blue-green algae blooms, sicken an estimated 80,000 Americans each year, a number that Scott says has risen dramatically in recent decades. He says the typical season during which vibrios cause sickness has expanded from the hottest months of each year now to April through October.

“It used to be primarily an illness in the Gulf of Mexico,” Scott says. “We now have cases in the Gulf of Alaska, so it spread geographically and temporally. If you increase time and space, that’s going to increase the number of cases. But also we have seen increased virulence.”

More than a year after she first fell ill, Valentine-Sanders says she has poor memory, feels chronically exhausted, gets dizzy frequently and suffers from breathlessness and crippling muscle and joint pain. Underlying medical conditions have been inflamed and “my cognitive function is really poor compared to what it used to be,” she says.

Results of a recent MRI pointed to brain stem compression, likely caused by inflammation, that may require surgery. In addition to the blue-green algae exposure, she says she was also sickened by red tides in 2001 and 2003 in Naples.

Valentine-Sanders, 51, spent much of her early life living and spending time on the waters around Pine Island, Cape Coral and Fort Myers. Though she moved to North Carolina in 2005 after Hurricane Charley, she frequently visits family in and around her old South Florida stomping grounds. During her lifetime, she has seen water quality in the area decline and instances of blue-green algae rise.

“Seeing the water from when I was a kid to when I was there — like, in that same place, you could see the bottom,” says Valentine-Sanders. “Now you can’t see anything.”

When Valentine-Sanders’ illness was diagnosed as exposure to blue-green algae, it received a medical classification number that was introduced just three years ago.

“We know quite a bit about the acute exposure symptoms,” says Shirley Gordon, a nursing professor at Florida Atlantic University. “But we don’t have strong data to inform us about any potential long-term effects as a result of being exposed over time to the harmful algal blooms.”

Public health researchers use data reported by hospitals and clinics to assess how often patients are seeking treatment for symptoms related to toxic algae exposure. But, as with many emerging health risks, symptoms may be misdiagnosed or miscoded. Patients might not know it’s important to mention their exposure to algal blooms, and doctors might not ask.

Even when acute exposures are suspected, Gordon says healthcare providers may not be able to effectively diagnose or treat their patients.

“One of the challenges in practice is that currently there are no tools available for the practitioner to use to determine the presence of microcystin toxins or breva toxins in the body,” Gordon says. “And we don’t know at this point what level of toxin — even if we were able to measure those levels — we don’t know what level of toxin in the body might be causing pathological symptoms.”

To better understand the long-term risks, Gordon is leading new research that will track health metrics and exposures to harmful algal blooms among adults who live or vacation on Florida’s coasts and lakes.

“Once they’re admitted into the study, then we follow them over time,” Gordon says. “The goal is to follow them each time there’s a bloom following their enrollment so we can look to see if those symptoms are changing over time, remaining the same over time, or or are non-existent.”

Despite a shortage of data on long-term impacts, research led by Saurabh Chatterjee, a physiologist and professor of medicine and environmental-occupational health at the University of California at Irvine, shows threats can compound over time, with children and obese people more at risk of fatal liver and kidney diseases, particularly if they’re exposed repeatedly.

“If you have liver disease, then you have a risk of developing cognitive issues,” Chatterjee says.

Otherwise healthy people face growing risks as well, as the more they’re exposed to toxins from the outbreaks, the more likely their infections are to become resistant to antibiotic medicines, according to Chatterjee.

Chatterjee cautioned that a lot more work is required before health threats from blue-green algae outbreaks are fully understood and new treatments developed. For now, he says, better systems are being put in place in some regions to protect people from being exposed to their poisons.

Florida’s Health Department provides updates on harmful blooms through its website, and users can sign up for email updates. But when harmful blooms strike, messaging to the public isn’t always crystal clear.

In Jacksonville and south along the St. Johns River, Riverkeeper Lisa Rinaman says there’s “lots of room for improvement” when it comes to warning residents of dangers. “Some of the health departments put out signs, but there’s not a consistent protocol, which has been a concern of ours.” 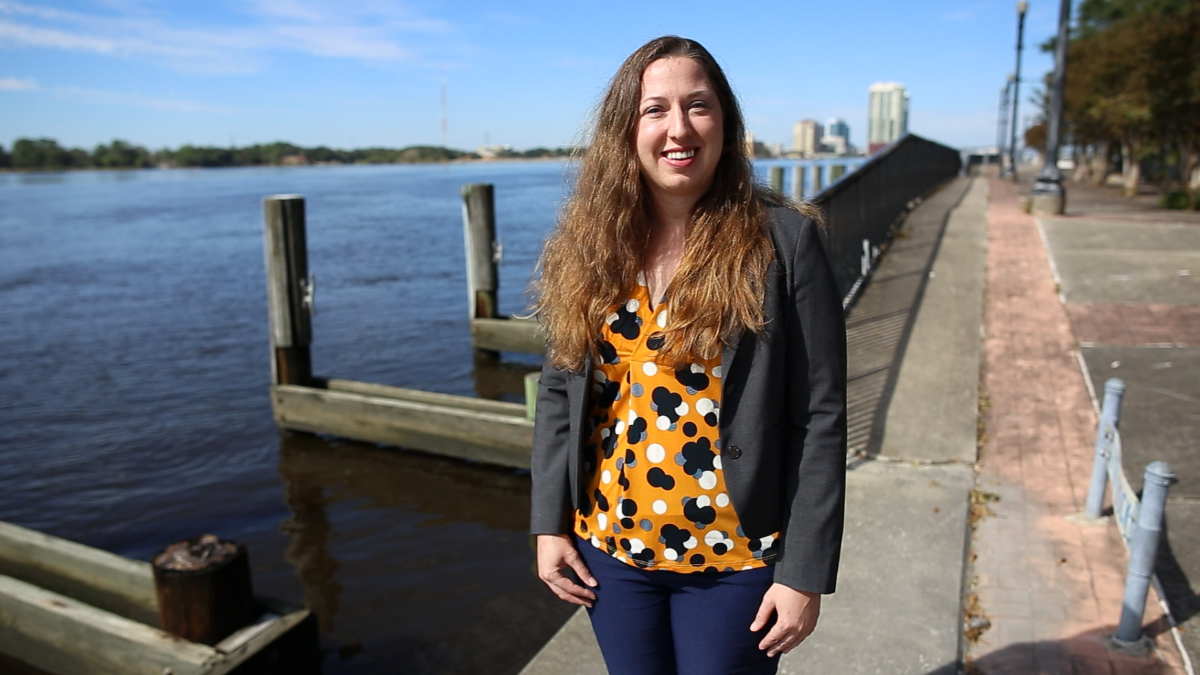 The North Florida Green Chamber of Commerce recently selected Jessica Tittl as its new executive director. She has some pretty ambitious goals for the Green Chamber — and the state of Florida as a whole. Read More

Your local weekday newsletter for news and ways to get involved in Northeast Florida.
Let me read it first.
Previous