Opinion: Kids should be able to live big 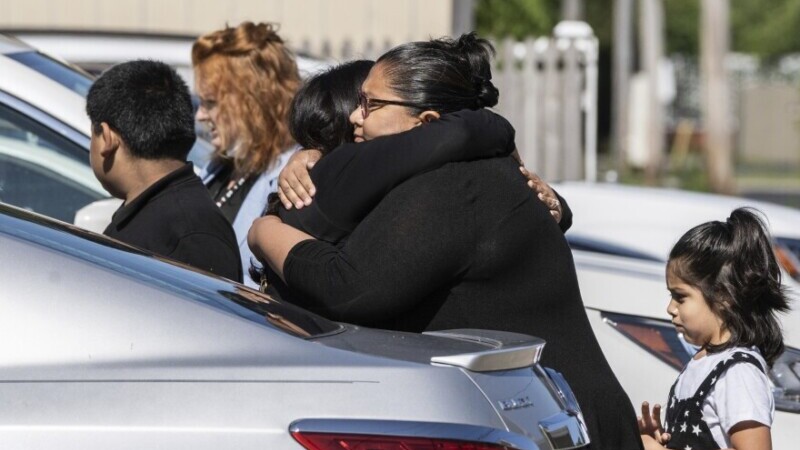 Mourners comforted each other after a funeral service for Eduardo Uvaldo, a victim of the July 4 mass shooting in Highland Park, Ill. | Chicago Sun-Times via AP

I was talking to my son recently about travel, and I suggested that for his next spring break we visit a friend of mine in Texas. After making my pitch, I asked if he wanted to go.

He said, “No. They have mass shootings in Texas.”

In the moment, I registered, Wow he’s really been paying attention when I watch the news. However, I kept trying to convince him that where I suggested we visit was not Uvalde and that since it would be his spring break he would not be in school.

“I don’t want to go to a place where they shoot the people in the school,” he said.

Face devoid of emotion, voice steady and even, he was adamant and resolute about where he did not want to go and what he did not want to do with his body and his life. When I recounted the story to my mother, she asked if he also wanted to avoid Chicago because of the July 4th mass shooting in Highland Park. I told her that he hadn’t made the connection that Highland Park was near Chicago. As I carried on with my day, I couldn’t help but wonder, What are we teaching our children?

As adults, we incorrectly assume our children aren’t too concerned with the affairs of grown folk — that they’re neither watching or paying attention. Similarly, we believe that we can shield them from news, content and subjects their young ears should not be privy to such as sex, violence and profanity. But what happens when the violent realities of the world invade their supposedly safe spaces and affect how they choose to live their lives?

Back home in Chicago, my 15-year-old nephew spends most of his time when he’s not in school cooped up in his bedroom. When I’ve visited and suggested he go out and about with me, he’s said, “I don’t go outside.”

He didn’t give an explanation, and I didn’t ask. I didn’t have to. In Chicago, outside can be dangerous. A decision to hang out on the block could conflict with someone else’s decision to do a drive-by. The safe place on the front porch is no longer safe. The neighborhood may know your name but they couldn’t care less about your life.

Rampant violence of both the mass shooting and individual variety force children across the country to shrink themselves and what they want for their lives. At a time when their dreams are supposed to be spectacularly global and their aspirations interstellar, the conditions of the world we have brought them into and refuse to legislate them out of have forced them to make life-changing choices at a young age.

What 15-year-old doesn’t want to learn to drive for the slightest taste of freedom?

What 7-year-old doesn’t want to get on a plane and go somewhere new?

I’m sure these two boys are not alone. Which presents the problem. How do we teach our children to live full, bold, audacious lives when they’re too afraid that their full, bold, audacious decisions could bring them harm? As adults, how do we model for them what it means to live confidently at the peak of our physical and intellectual capacity when we too are afraid of the very same disturbed humans who commit violence?

Fear as a human emotion is designed to keep us safe. Not touching a hot stove is one thing.

Refusing to leave home is another.

As adults, if we continue to do nothing to challenge and change the rampant violence in our society, the unbearable climate we air-condition our way out of, or the displacement of people due to a lack of affordable housing that we view as a “them” problem and not an “us” problem, our children will develop their own responses rooted in fear.

They may learn perhaps that not moving, not changing, not learning, not living differently is better than the risk of failing. They will learn to stay down instead of getting back up and trying again. They will learn that to shrink, to stay small and compact is more beneficial than living big, brashly and out loud.