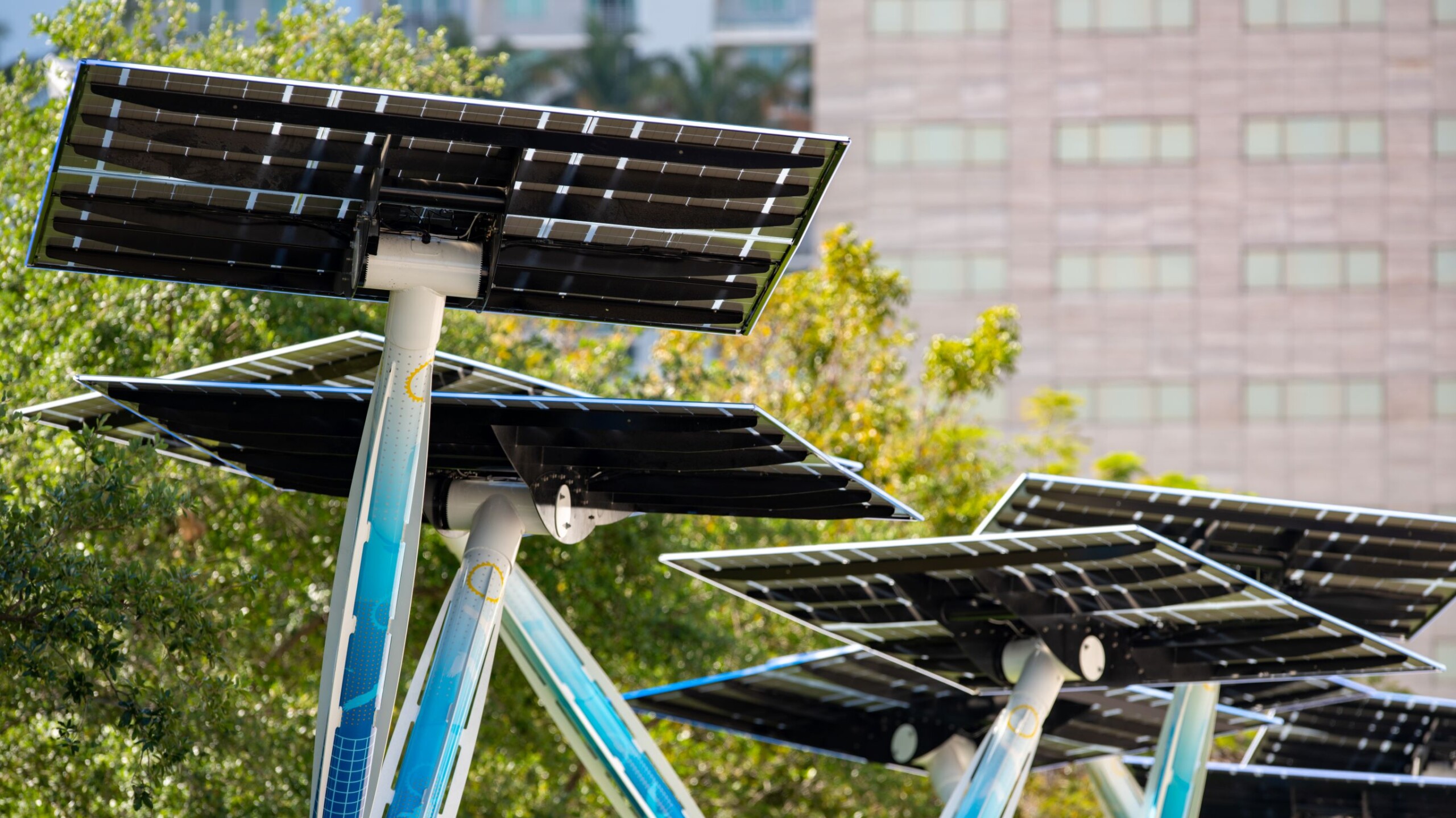 Florida Power & Light, one of the largest utility companies in the U.S., plans to eliminate carbon emissions from its electricity generation by 2045 by expanding the use of solar energy and other technology, the company announced this week.

The plan, part of a broader decarbonization effort outlined by FPL’s parent company, NextEra Energy, would lead to massive increases in the use of solar panels and battery-storage technology. Also, it would mean shifting to what is known as “green hydrogen” at power plants and continuing to use nuclear power.

FPL Chairman and CEO Eric Silagy, addressing an investor conference, described the plan as a “march” but said it will build on changes that have included FPL ending the use of coal at plants in the state.

“Being clean is good business,” Silagy said. “Being fuel efficient is really good business and good for customers.”

The plan, to be phased in over more than two decades, would represent a huge change in the way FPL does business. In 2021, natural gas made up more than two-thirds of FPL’s generation “fuel mix.” Nuclear was the next-highest at 20%, while solar was at 4%, according to the investor conference presentation.

Related: The U.S. is divided over whether nuclear power is part of the green energy future

In 2045, a combination of solar, battery storage and green hydrogen would make up 83% of the utility’s production, under the new plan.

Michael Craig, an assistant professor of energy systems at the University of Michigan’s School for Environment and Sustainability, tells ADAPT that he’s impressed by the NextEra announcement.

“I think it’s a good plan,” he says. “If they were to build what they say they’re going to build — this massive amount of solar, this massive amount of battery storage, all the green hydrogen, all the transmission distribution, the renewable natural gas — if they did all this, then yes, they would have roughly zero emissions in their power sector, assuming that they were purchasing carbon-neutral electricity as well.”

One of the most impressive parts of the plan, according to Craig, is NextEra’s commitment to reach net zero without using carbon offsets. A carbon offset is when a company, government or individual who’s emitting carbon dioxide finds a way to remove the equivalent amount of greenhouse gas from the atmosphere, such as by planting or protecting trees or installing machines that suck carbon dioxide out of the air. Carbon offsets are part of many companies’ climate pledges.

Related: Corporate climate pledges are weaker than they seem, a new study reports

“You see a lot of plans that rely on not necessarily reducing your emissions but purchasing offsets,” Craig says. “You would hope an electric power utility would not do that, because power needs to be the first sector to decarbonize. And so it’s nice that…Florida Power & Light is saying, ‘We are going to be having zero emissions ourselves, full stop, from our generation.’”

FPL, by far the state’s largest utility, and other utilities have moved steadily in recent years to add solar energy. That’s as solar has become more cost-effective, battery storage has developed and climate change pressures have increased to reduce carbon emissions.

But burning natural gas continues to dominate electricity generation in Florida — a dominance that has hit customers during the past year as they have seen monthly bills increase because of higher natural-gas prices. Natural gas is a fossil fuel that produces about half as much carbon dioxide (the primary greenhouse gas driving climate change) as coal when burned, but its main ingredient, methane, is considered a climate “super pollutant.” Methane has more than 80 times the warming power of carbon dioxide over a 20-year period, and it frequently leaks from drilling sites and pipelines.

Related: Your JEA bills are likely to jump this summer

Also, FPL said it will convert some natural-gas plants to run on green hydrogen, a fuel made through a process of splitting water into hydrogen and oxygen, according to NextEra. Florida lawmakers this spring passed a sales-tax exemption for such things as equipment needed to produce green hydrogen, a measure that was sought by FPL.

Silagy said FPL is building a $65 million green-hydrogen pilot project that is expected to operate next year.

Related: Hydrogen may be a climate solution. There’s debate over how clean it will truly be

In a news release, FPL said it intends to carry out the plan “at zero incremental cost for its customers, relative to alternatives,” indicating it would not cost more than what customers otherwise would pay.

Professor Craig believes the plan could be cost neutral for customers in the long run, but it might be tough during the transition from fossil fuels to renewables.

“The nice thing about renewables is once you build a solar plant, it generates electricity for free. The downside of renewables is they’re very capital intensive. So there is this transition period where you’re retiring fossil plants,” he explains. “If you’re paying for retiring plants at the same time as you’re paying for building new plants, I could see rates increasing in the near term, maybe before they start to drop off in the long term.”

How that transition will affect the bills of FPL’s 5.7 million customers (over 200,000 of them in the Jacksonville area) will likely be determined by what state regulators do. Other states, like Colorado, have rules in place to make sure that the costs associated with retiring fossil fuel assets don’t hurt ratepayers.

However, the transition could end up saving ratepayers money — and improve their health.

“I would bet that you’d have a lot of net benefits for society, between the power cost side of things that people would see on their bill itself and then things that they don’t get a direct bill for but that they pay indirectly for, such as health burdens from emissions from fossil fuel plants that you would not be exposed to any more,” says Craig.

The FPL plan is part of what NextEra has dubbed its Real Zero effort to decarbonize. NextEra, based in Juno Beach, operates in multiple states.

“We’ve worked hard in developing Real Zero to ensure we have a credible technical pathway to achieve our goals and well-defined milestones every five years so we and all stakeholders can track our progress,” NextEra President and CEO John Ketchum said in a statement. “We’re part of an industry that is well positioned to make the most progress in the elimination of carbon emissions, and Real Zero is NextEra Energy’s goal to set a new standard for all power generators.”

Given that this plan is voluntary and doesn’t include any enforcement mechanisms, Craig says only time will tell if NextEra is serious or just trying to get some positive publicity.

“It’s greenwashing if they put forward this plan and they don’t act on it,” he says. “But if 2045 rolls around, and instead they’ve done everything that they said they will do and they’re fully decarbonized, then we would say, ‘Well, that wasn’t greenwashing. That was a serious plan, they were serious about achieving it and they did achieve it, so they have made an excellent contribution to mitigating climate change.’ You only know in retrospect.”

On June 2nd, ADAPT partnered with Flagler College and the Crisp-Ellert Art Museum for “Undercurrents: Cultures of Climate Change,” an in-person panel discussion on climate change, how it’s impacting cultural resources in the city of St. Augustine, what’s being done about it and how artists can use their work to both spread awareness about climate change and call for action. Read More