Opinion: Relief and belief in justice are not the same 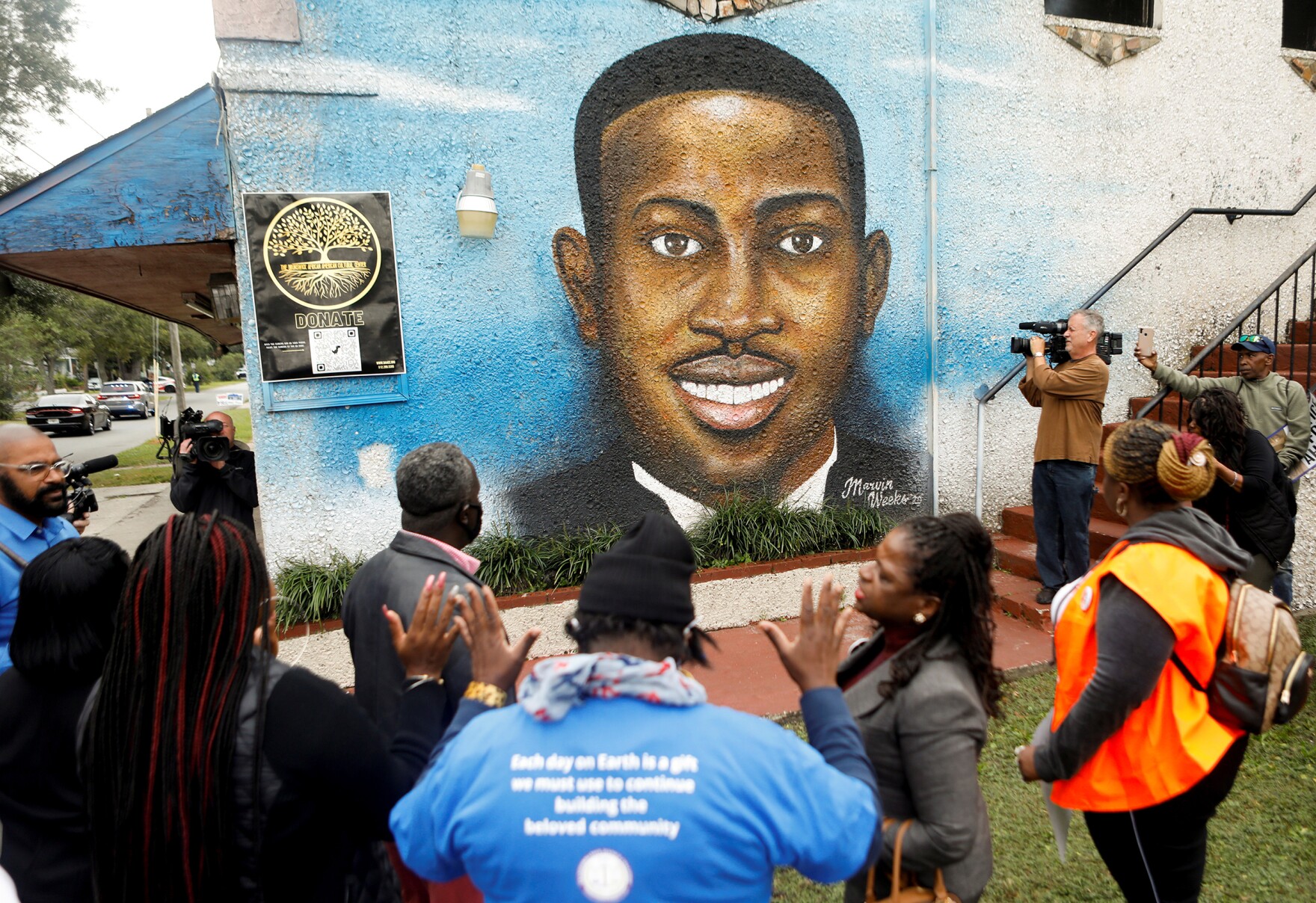 People gather in front of a mural of Ahmaud Arbery painted on the side of The Brunswick African American Cultural Center in Brunswick, Ga.,

“Verdict watch . . . one guilty but this is stressful.”

I fired off that tweet after Travis McMichael was found guilty of all charges for killing Ahmaud Arbery. I watched the judge read the verdict as my gumbo simmered on the stove for Thanksgiving dinner. A spoon in my hand, my daughter on my lap, and my clothes covered in seasoning, I stopped my preparations to hold my breath and hope for the best.

Just the week before, Kyle Rittenhouse was acquitted of all charges for killing two men and injuring a third—who testified against him—at a Black Lives Matter rally over the police shooting of Jacob Blake in Wisconsin. With the outcome of that case as the backdrop, my belief in a nearly all white jury in Brunswick to convict three white men for killing a 25-year-old Black man was not high. And yet they did. So, why doesn’t it feel like justice?

Relief? Yes. But not justice.

Maybe because every year at Thanksgiving I’m reminded of Jordan Davis, the 17-year-old Jacksonville boy murdered by Michael Dunn on Black Friday, November 23, 2012, because he refused to turn his music down. It took two trials against Dunn before he was convicted of Davis’ murder. George Zimmerman is still a free man even though he stalked and killed Central Florida teen Trayvon Martin like the McMichaels and William “Roddie” Bryan did Ahmaud Arbery. Minnesota police officer Jeronimo Yanez is still a free man after he killed Philando Castile in front of his girlfriend and daughter.

There are too many killers who have taken Black life and are alive, free, and living well for me to name. For every Derek Chauvin, Travis McMichael, Gregory McMichael, and William Bryan who have been convicted for the flagrant and egregious nature of their crimes, there are dozens more who get to continue their lives as usual. Their stint with the criminal justice system a speed bump, a hiccup, in their life of privilege.

Also by Nikesha Elise Williams: My Thanksgiving wish for a less divided Jacksonville

Raising Black children, I am not convinced the world will see them as precious as I do. I am not convinced that their spunk won’t be mistaken for impudence, their intelligence for hubris, their precocious and outgoing nature for assertiveness or a failure to comply. I am not convinced that the speed at which they run and the power they wield in their bodies won’t be viewed with suspicion. But I worry in the recesses of my mind, fronting in front of them so they will never know that, just as easily as I see other faces, frozen in time, of Black lives no longer being lived, I can just as easily see them, their lives taken for nothing.

I worry. I sip air. I’m relieved at the appearance of justice, but I never believe in its supposed blindness. I don’t exhale. Not fully. I save my breaths, conserve my energy, because I may need it in the next time of grief.