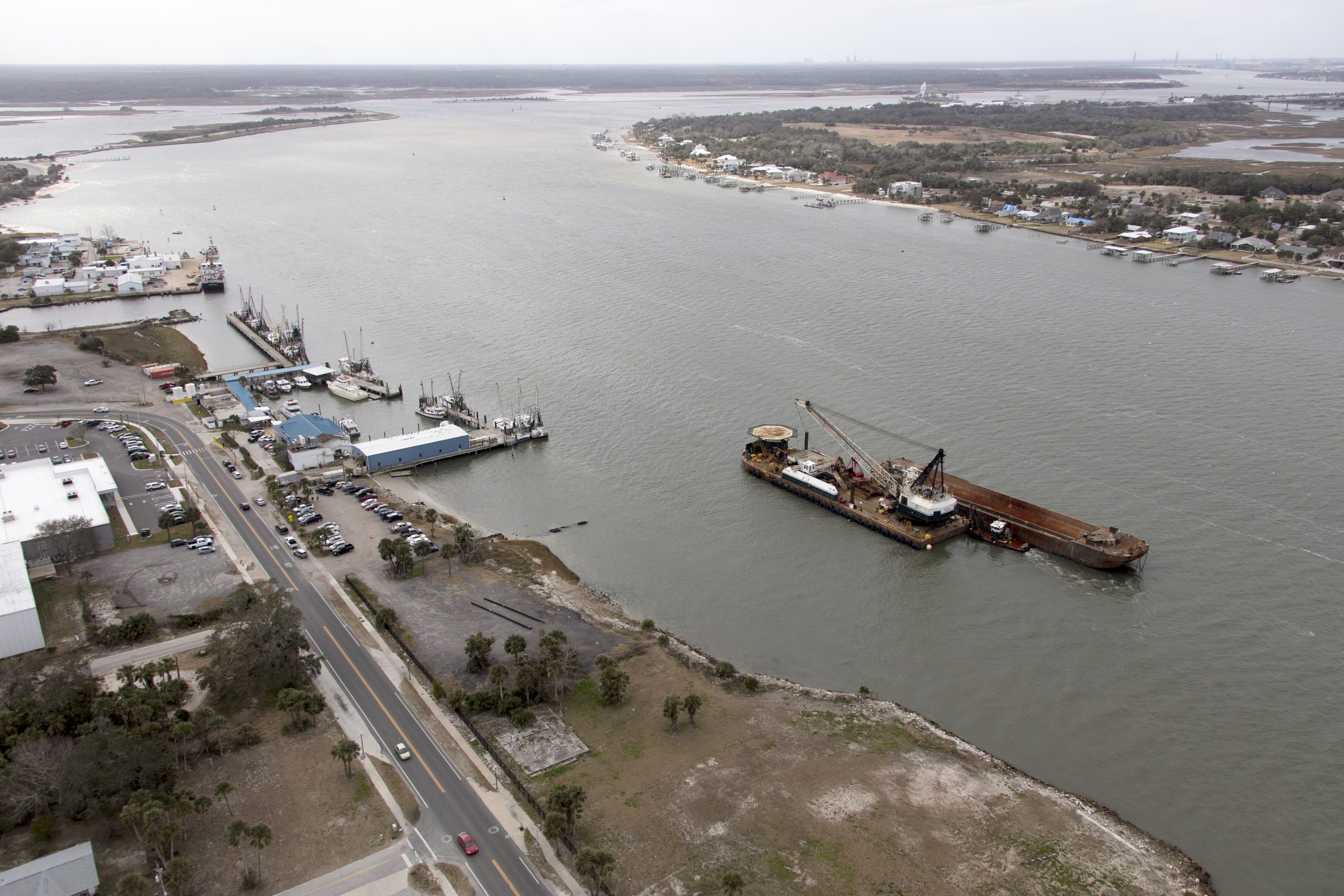 A century of altering the St. Johns River has left Jacksonville more vulnerable to flooding

On October 2, 1898, a Category 4 hurricane made landfall just north of the Florida/Georgia border.

The unnamed storm caused record flooding in many areas, and at least 120 people were killed around Darien and Brunswick, Georgia — cities that are less than 100 miles north of what is today Downtown Jacksonville.

“The water during the hurricane on Sunday was never known to be so high in the history of this city,” read a story from Fernandina Beach in the October 5, 1898, edition of The Savannah Morning News. “The damage and ruin at Amelia Beach was almost as complete. All the cottages but two were said to have been carried out to sea…”

Despite the extensive damage to nearby coastal communities, the city of Jacksonville was left relatively unscathed by that storm thanks to the environmental defenses provided by the St. Johns River and an expansive system of wetlands. However, researchers say if that exact hurricane were to strike again today, it would cause “catastrophic” damage in Jacksonville, largely due to changes that people have made to the St. Johns over the past century.

Jacksonville would not be the city it is today were it not for these changes. According to JAXPORT, cargo activity through the port generates about 138,000 jobs in Florida and more than $31 billion in annual economic output for the region and state. Port officials project the ongoing harbor deepening will create or protect 15,000 jobs and return $24 for every $1 invested in the project.

“In addition to creating jobs, a thriving seaport also supports area business development throughout Florida, including manufacturing, distribution and warehousing,” JAXPORT spokeswoman Chelsea Kavanagh wrote in an email to ADAPT. “As these port-dependent companies hire employees, the tax base also increases, benefitting the region and state.”

But those changes — along with sea level rise — are also worsening flooding and increasing erosion and saltwater intrusion, among other issues, as has been reported by The Florida Times-Union.

Do the benefits outweigh the costs of dramatically altering the most significant natural feature in the region?

“This is a worldwide phenomenon that’s repeated in many, many other places, and it really hasn’t gotten as much attention as climate change or sea level rise. But over the last 100 years at least, it has been — in many places — as consequential,” said Stefan Talke, an associate professor in civil and environmental engineering at California Polytechnic State University and the lead researcher on a recent St. Johns River dredging study published in the Journal of Geophysical Research: Oceans.

Because the St. Johns River is now deeper, wider and straighter, there’s less resistance to slow down the water moving through it. That means water coming up from Central Florida can now exit the mouth of the river and flow into the Atlantic Ocean more quickly.

In some cases, that’s beneficial — “fortuitous” even during 2017’s Hurricane Irma, Talke said. Though the storm caused record flooding in and around the city, he said, because the system approached from the southwest, its rainfall, runoff and wind-induced currents were able to empty into the ocean more easily than they would have a century ago.

However, Talke said, “If Irma or a future hurricane came from the ocean, it could be much, much worse.”

That’s because those same factors that allow water to more quickly drain out into the ocean also allow water from the ocean to move more quickly upstream. This has effectively doubled the tidal range — the difference between high tide and low tide — in some spots, including in and around Downtown Jacksonville and at Dames Point, since the 1800s. Now during high tide, more water is able to make its way into the St. Johns River, leaving Jacksonville more vulnerable to marine-sourced flooding, like nuisance or sunny day flooding. The larger tides paired with higher storm surge mean hurricanes approaching from the Atlantic pose a bigger threat today as well. Further dredging will only increase those vulnerabilities.

The Army Corps’ own analysis estimates that the ongoing dredging could increase storm surge during a 100-year event by 3 to 6 inches and by as much as 8.4 inches in some areas.

“The effects of any kind of hurricane today, because of the way the river has been changed, would be much worse. There would be much higher impacts from flooding, all because of the way the river has been channelized and deepened, and it would allow greater [storm] surge coming into the river,” said Gerry Pinto, an associate research scientist at Jacksonville University’s Marine Science Research Institute and one of the lead authors of the annual State of the River Report for the Lower St. Johns River Basin.

It is true that Jacksonville is in a geographic location that makes it less likely to suffer a direct hit from a hurricane than many other areas in Florida, according to Quinton White, executive director of the Marine Science Research Institute at JU. But Jacksonville will eventually run out of luck.

“It’s not a question of if, it’s a question of when. And while the odds may be down, it only takes one,” White said. Hurricane Irma, downgraded to a tropical storm by the time it reached North Florida, caused an estimated $85 million worth of damage in Jacksonville and killed at least two residents. A direct hit from a hurricane approaching from the Atlantic could cost the city exponentially more, not to mention the potential loss of life.

Changes to the river are not some far-off, distant threat for future generations to worry about.  People who live on or near the St. Johns River are already seeing their effects.

“When we had storms come by in the past, we would get a surge and then that surge would bring the water up into my yard. It would get about halfway to the pool and it might take an hour or two to get there,” said Jim Bentley, who’s lived in a home on Little Marsh Island, just south of the Timucuan Preserve, for more than two decades.

“But after the dredge, when we had another similar situation, the water just came up not twice but probably three to four times as fast, and it went out equally as fast.”

Bentley said he remembers shortly after the Corps did some dredging work several years ago, pieces of the shoreline near his home started falling into the water.

“The sand just gave away and went out to the channel,” he said.

Between rising water levels and erosion, Bentley says the river is about 10 feet closer to his home now than it was when he moved in.

Jeff Edwards has lived on the St. Johns River in Mandarin for more than three decades and is a lifelong resident of Jacksonville. He says over time the waterway has started to resemble the ocean more than the river he remembers from his childhood.

“When we moved there, there were all kinds of seagrass,” Edwards said of his Mandarin home. But now, the seagrass is all gone. Similarly, Edwards had 10 or so cypress trees on his property when he moved in. “At least five or six of them have died and are gone,” he said. “If you look along the riverbanks and you look up and down the river, other cypress trees, they’re all dead or mostly dead and declining.”

The changes Edwards describes are likely due to saltwater intrusion in the St. Johns. When you deepen the riverbed and smooth out the naturally rough bottom, you make it easier for saltwater from the ocean to flow upriver. As salinity has risen in the St. Johns River, cypress trees and submerged aquatic vegetation, or seagrasses, have been lost along the banks.

“What does that do? Well, it means that we no longer have the grasses that support the juvenile fish, shrimp and crabs and things like that, that need those areas as a nursery ground,” explained White, who has spent his career studying the impact of human activity on the St. Johns River. “It also means we don’t have the food for manatees. You’re seeing one of the consequences of that, this year, in the high record number of manatee deaths.”

White said scientists used to agree that the river’s fresh water/salt water break was somewhere near the Main Street Bridge. Now they think it’s somewhere around the Buckman Bridge, 20 miles or so upstream.

A Change of Strategy

Environmental advocates have been fighting the continued dredging of the St. Johns River for years. The St. Johns Riverkeeper filed a lawsuit in April of 2017 to try to stop the current project, but last year a federal judge ruled against the Riverkeeper, saying the nonprofit didn’t meet the high burden of showing the Army Corps failed to assess the environmental impacts of dredging the river.

Now the Riverkeeper and its allies are shifting focus.

“There is an obligation for the government to offset the impacts of the dredging, and unfortunately the city let them get off scot free,” said St. Johns Riverkeeper Lisa Rinaman. “So we need to make sure we’re doing all we can, that we’re tapping into resources that not only protect our river, but also make our river and adjacent properties more resilient to the harm that will be done with dredging, as well as sea level rise, which will be accelerated by the impacts of the deep dredge.”

The Riverkeeper’s top priority for offsetting the saltwater intrusion is to remove the Rodman Dam near Palatka, some 70 miles southwest of Downtown Jacksonville, and restore the Ocklawaha River, a tributary of the St. Johns. It’s an effort with a history of business and civic support going back years in Jacksonville, but the dam still stands.

“Restoration of the Ocklawaha would return an estimated 150 million gallons a day of flow to the St. Johns River which is currently lost to evaporation and diminished spring flow. Such an influx of fresh water would help mitigate the impact of dredging,” said White.

The Army Corps’ own analysis also points to restoring the Ocklawaha River as a step that could mitigate some impacts of the dredging.

Pinto said another way to help keep flooding out of homes and buildings is the ongoing McCoy’s Creek restoration project, “where you have parks and areas around creeks that are likely to flood being used for a dual purpose: for recreation, but also for their ability to absorb water when we get flooding.”

That project, along with the Hogans Creek restoration, is a part of the larger Emerald Trail — a public-private partnership between the city of Jacksonville and the nonprofit Groundwork Jacksonville that will connect at least 14 historic urban neighborhoods to Downtown, the St. Johns River, McCoys Creek and Hogans Creek with a 30-mile bicycle/pedestrian trail and park system. The project is expected to be finished by 2029.

Plenty of other steps could also be taken to help address the problems caused by the changes that have been made to the St. Johns River, like expanding and protecting wetlands or changing where and how we develop along the river.

But Pinto said, “I don’t think we’ll really get away from it completely.”

Spokespeople for the city of Jacksonville and the U.S. Army Corps of Engineers did not respond to multiple interview requests by this story’s deadline. If we receive a response, this article will be updated. 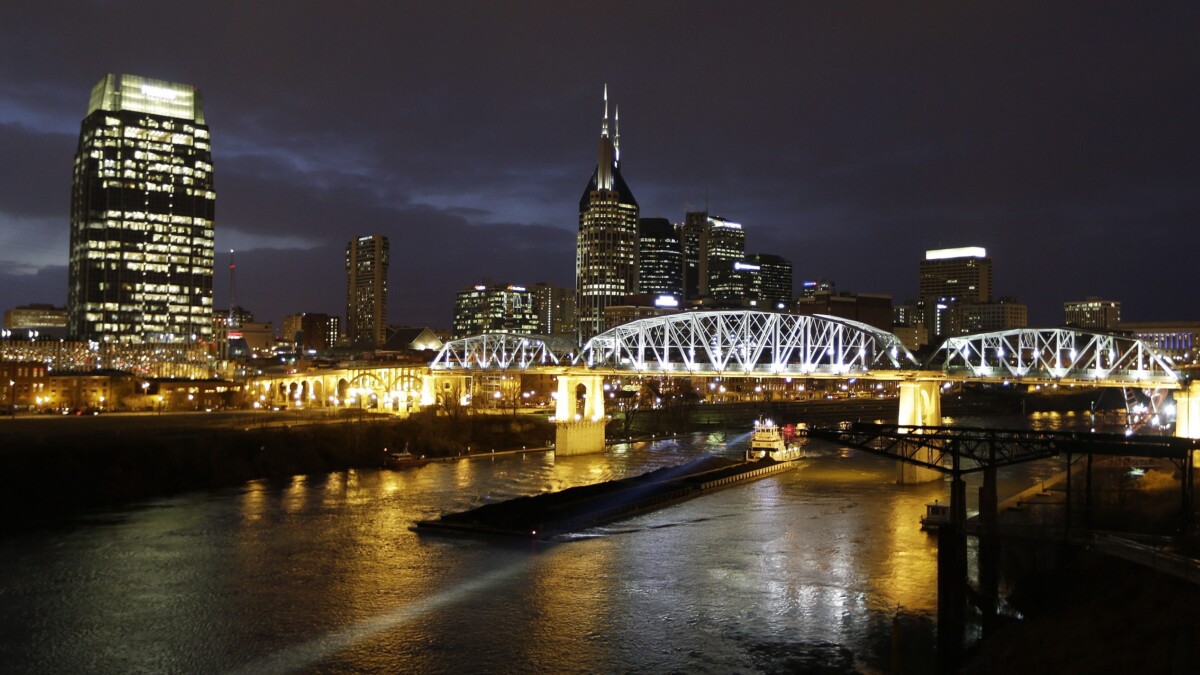 ADAPT What Jacksonville can learn from Nashville about fighting climate change

Compared with Nashville, Jacksonville is doing relatively little to reduce its carbon footprint and does not have a climate action plan — although many believe the city is starting to move in the right direction and should look to examples like Nashville for the way forward. Read More