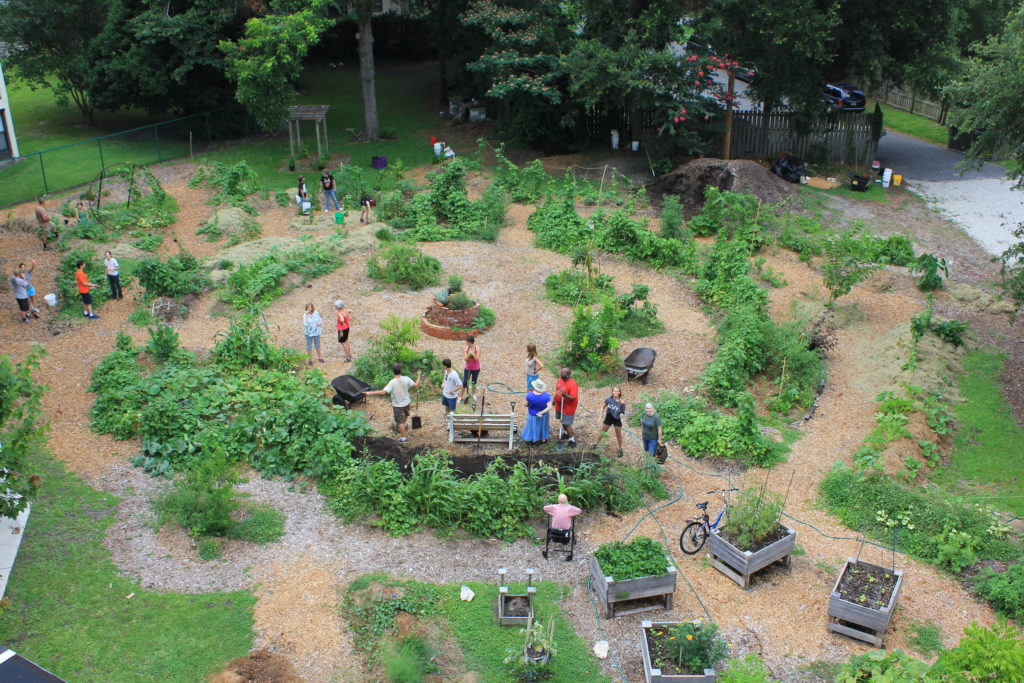 It’s that perfect spring morning in the community garden on the Westside; seventy degrees, soft breeze, an Easter-egg blue sky. The birds are singing and chirping, the plants and flowers newly lush and not yet showing the strain of summer heat. It’s so quiet and peaceful it’s easy to forget that just steps away is Edgewood Boulevard, with its bus stops, bakeries, vape shops and pool hall.

George Martin is by himself this morning working the raised beds that hold potatoes, onion, hot pepper, greens and sweet peas. The retired accountant says gardening is his entertainment, just like it was back in his working days.

“It’s better than sitting in a room watching TV,” he says, gesturing to the seniors’ apartment complex that surrounds the garden.

What’s unique about this garden is its origins. The courtyard where the garden is now originally was just sod and weeds, and its downward slope meant rainwater rushed through the space and out into the storm drains, to be carried off to a treatment plant or to a local waterway.

In 2015, community volunteers turned the barren space into a productive garden, in part by building up the topography in various spots to slow down the runoff and capture it for irrigation.

Using natural elements to capture water is an old gardening method called “permaculture” that has its roots in indigenous farming practices. Those practices have been given a fresh look in recent years as there’s more public awareness about water usage.

On a larger scale, cities around the country have been incorporating some of the same ideas. Called “green infrastructure,” it means using natural systems to manage storm and flood water, decrease urban heat and protect shorelines.

For example, rain gardens, planter boxes and bioswales are ways to capture and store rainwater on site, rather than letting it enter the drainage system. Permeable sidewalks and roadways also keep water from overwhelming the drainage system, something Jacksonville’s many historic districts could benefit from. Other tools include cultivating the tree canopy to reduce heat and absorb stormwater, replacing bulkheads with living shorelines and preserving wetlands to capture flood water.

Many cities around the country now have proven examples of green infrastructure — Atlanta, Philadelphia, New York, Portland and St. Petersburg, to name a few. Unfortunately, Jacksonville isn’t one of them.

Not yet, at least.

But the city’s resiliency committee, comprised of city council members, city staffers and outside subject matter experts, studied the topic and issued pretty clear findings in its just-released report.

Years ago, there was some movement in Jacksonville toward embracing green infrastructure.  The EPA featured Jacksonville in a 2011 “Community Partner Profile”, stating the city would introduce green infrastructure to help reduce runoff to the St. Johns River and “reduce local flooding issues associated with impervious cover.”  It said other goals were to “[i]improve community aesthetics” while “undergoing an urban renewal and transformation from an industrial city.”

A Low Impact Development manual was written in 2013 to be used by industry professionals to plan green infrastructure projects. It outlined tools to “retain, infiltrate and treat stormwater on site.” Benefits include removing phosphorus, nitrogen, metals and pathogens.

But those efforts fizzled out, for reasons no one seems to know. Today, it’s hard to even find the manual, said Shannon Blankinship, advocacy director with the St. Johns Riverkeeper.

It’s also not known if there were ever more than just a few green infrastructure projects planned and completed by the city. It provided a summary of those projects in the EPA report, but a January 2021 project list from the city to the Florida Department of Environmental Protection shows calculations to assess the 2015 and 2017 projects haven’t yet been done. A city spokesperson was not able to provide an update on the manual, any past or future projects or make anyone available to be interviewed.

Atlanta was one of several cities mandated by the EPA about a decade ago to improve its stormwater management, because it had a combined sewer system. That means raw sewage and storm water are combined in the same pipes and transported to treatment plants, but in cases of overflow, raw sewage gets released into area waterways.

By using green infrastructure, the city has been able to avoid overflowing the system. “It’s where we’ve gotten the bulk of the volume control we’ve seen over the last eight years,” said Cory Rayburn, Watershed Director, in a webinar produced by the St. Johns Riverkeeper.

Jacksonville doesn’t have that type of sewer system and so hasn’t faced any federal pressure. But it does have a mandate from the state of Florida to improve the health of the St. Johns River by reducing nutrient flow into the river.

In 2008, the 2,075 square mile watershed, which stretches from Palatka to the Atlantic Ocean, was listed as “impaired” due to excessive amounts of nitrogen and phosphorus that make the water unhealthy for fish, shellfish and humans. The region was placed under a Basin Management Action Plan (BMAP) that requires all municipalities, utilities, businesses and agriculture to reduce nutrients to target levels by 2023. A 2020 update shows the watershed as a whole has made significant gains in reaching the goals.

But Jacksonville is only about half way where it needs to be, said Jimmy Orth, executive director for the St. Johns Riverkeeper.

That’s where the green infrastructure projects outlined in the Low Impact Development manual possibly could’ve been earning the city some BMAP credits – and helping clean up the river. So far, the city has mostly relied on traditional retention ponds for many of its stormwater projects.

In 2012, the Riverkeeper sponsored a project in front of the San Marco Library in order to showcase how green infrastructure can work. Along the front of the library, in the 8-foot section between the sidewalk and LaSalle Street, a bioswale was created with native plantings and shallow ravines that snake through the space to slow down, hold and filter rainwater. The cedar saplings planted there are now 20-feet tall and provide a shade canopy over the sidewalk, giving the box-like building a forested look (see photo). That’s in contrast to the Hendrix Street side, which has one tree in the center of an elevated lawn, where rain water has no place to go but downhill, into the gutter and out into the St. Johns River, untreated.

Keeping water on site has become important as infrastructure systems around the country age out at the same time flood and stormwater are increasing. Traditional 20th century systems also rely on gravity to move the water. Rising waters, like in the St. Johns River, are now backing up those systems.

Orth says the biggest green infrastructure project so far is the McCoy’s/Hogan Creek project being managed by Groundwork Jacksonville, formed by non-profit, community and business leaders in partnership with the city. (To hear more about Groundworks’ latest restoration projects, tune in to the upcoming Adapt Event, “Using Parks and Green Space in the Fight Against Climate Change.”)

He’s also encouraging the city to use green infrastructure tools in its restoration of Willowbranch Creek in Riverside, including the use of a new tool for calculating storm water uptake by trees. That came out of a tree study by the Green Infrastructure Center in Virginia, who was commissioned by six states to study the declining tree canopy in the south. Jacksonville was one of 12 municipalities studied.

Karen Firehook, director and co-founder of the center, says the city has been trying for the last year to sign up for training on its stormwater model, but has had some scheduling problems due to the pandemic.

The federal government is on-board with the benefits of green infrastructure. The EPA states it’s a “cost-effective, resilient approach to managing wet weather impacts” and can help communities manage the effects of climate change already being felt. FEMA has a guide for communities called, “Building Community Resilience with Nature-Based Solutions.” Better yet, they offer grants and other financial incentives.

In Murray Hill, George Martin shows off the mint he’s cultivating for tea for the other residents (“very refreshing”). When there’s enough of it, he plans to make a fish dish from his native Portugal. The mulberries are beginning to ripen and the papaya tree yielded 22 papayas last year.

Building the garden took a bevy of volunteers, but six years on, it’s well established and providing food, entertainment and habitat. And it has captured countless gallons of rainwater that would’ve otherwise filled the storm drain. “We only have to water in July and August,” he said.

The examples of green infrastructure are stacking up around the country.

“Now there’s a good track record,” said Orth. “There are proven cost efficiencies and a decreased pollutant level in stormwater. Green infrastructure works better, saves money and lends an aesthetic to the community.” 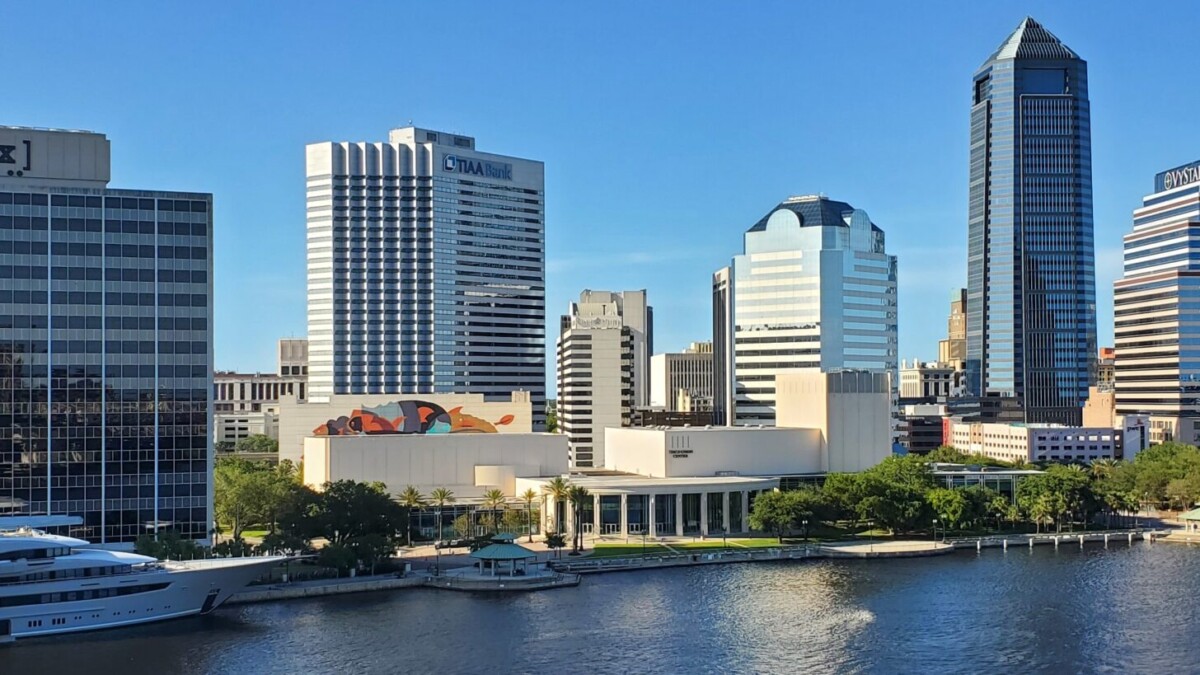 The city of Jacksonville is playing catch-up when it comes to addressing climate change, but it’s now poised to take significant action thanks to the recent work of the City Council’s Special Committee on Resiliency. Read More